Blame game begins over near miss with Russian rescue sub

Prosecutors with Russias Pacific Fleet opened earlier this week a criminal inquiry against the captain of one of the Russian vessels that took part in the rescue of a mini-submarine that was nearly fatally snared with seven crew under the Pacific Ocean early this month, Russian news agencies reported. 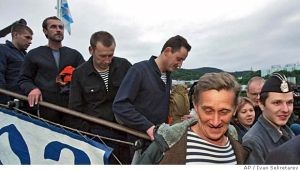 But the Russian Navys habit of pinning blame on low- and mid-ranking officials, while upper brass dodges responsibility, seems to be the motivating factor behind this latest set of charges from the military, experts say.

The captain of the rescue vessel, Viktor Novikov, was charged with negligence for allegedly damaging a robotic underwater device in the course of the rescue operation, an official with the office of the Naval Prosecutor of Russia’s Pacific Fleet in Vladivostok told RIA Novosti.

The expensive device was damaged through the captain’s lack of professionalism, the official alleged.

Prosecutors last week had already opened a criminal enquiry over the submarine incident, after the investigation into the three-day drama to save the sunken AS-28 mini rescue sub "revealed that a series of people involved allowed negligence in the organisation of the submarine’s work," the Deputy Naval Prosecutor of Russia’s Pacific Fleet, Roman Kolbanov said, according to Agencie France Press.

Prosecutors last week alleged that those under investigation broke fleet rules by sending out one mini-submarine by itself, instead of two. Participants in the rescue operation were also questioned.

Condition of the saved sailors
The saved crew members of the Priz are now being treated in a hospital in the Petropavlovksy-Kamchatka region. Hospital personnel have refused to allow them to be debriefed about the accident yet. But Yelena Miloshevksaya—the wife of 25-year-old, Priz commander, Lt. Vyacheslav Miloshevsky—said that the interrogations began almost immediately after they were safe on dry land.

Despite Defence Minister Sergei Ivanovs request not to touch the guys for a period of time, the interrogations began the next day after the rescue, she told Kommersant Russian daily newspaper.

More accusations to come?
Many anticipate that Priz captain Miloshevky will also fall under the prosecutor’s gun.

They will now make another scapegoat out of Milashevsky, the commander of the AC-28, said Alexander Pokrovsky, a veteran of the Russian Navy and author of books and articles about submariners. This is because the principle of fleet commanders remains as it always has—make a fall guy out of the one who has the lowest rank, he told Russian news agencies.

Milashevksy, despite his young age, however, has a distinguished record. He commanded seven dives on bathyscaphe vessels prior to the early August incident.