With the Cold War over, the need for stealthy SSBN forces has diminished. Naval planners, while maintaining their fleets of SSBNs, are focusing on expanding their multipurpose submarines, equipped with cruise missile launchers. 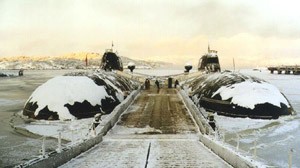 There are two types of nuclear-powered submarine in service. The first type is the ship submersible ballistic nuclear (SSBN) which provides a strategic nuclear offensive capability (See Nuclear-powered strategic submarines worldwide—a comparison. This paper deals with SSBN only in passing, for the sake of completeness). The second type is the multipurpose submarine: non-ballistic missile boats (SSGNs) and fast-attack boats (SSNs), 1 the principal focus of this paper.

Changing priorities
With the Cold War over, the need for stealthy SSBN forces has diminished. Naval planners, while maintaining their fleets of SSBNs, are focusing on expanding their multipurpose submarines: SSGNs, equipped with cruise missile launchers, and SSNs, traditionally assigned patrol duties in support of SSBNs and carrier battle groups. In line with naval doctrine, planners have started to turn their attention away from traditional anti-submarine warfare (ASW) and towards multipurpose submarines capable of carrying out a broad range of missions aimed at achieving “battlespace dominance” although this may involve the sacrifice of traditional submarine characteristics such as stealth and endurance.i

The United States
At 72 vessels, the US Navy, or USN, operates the largest and most capable fleet of nuclear submarines. The USN currently fields 18 Ohio SSBN though two have been removed from operational duty and are undergoing conversion to SSGN configuration. In fact, there are plans to cut the number of Ohio to 14 by 2007 (two Ohio will be in overhaul and will not be counted as part of the ‘operationally deployed force’).i The USN operates a fleet of multipurpose submarines comprising of 33 SSGN (2 Seawolf, 23 improved Los Angeles and 8 modified Los Angeles) and 21 SSN (20 Los Angeles and 1 Sturgeon).

The US Navy’s vision for the 21st century
The USN’s vision of the twenty-first century submarine is one that depends on being able to rapidly incorporate technological innovation in order to optimise the war-fighting capabilities of the submarine platform. There is an imperative to expand the role of the SSN in the littoral environment and increase its contribution to joint expeditionary operations.

In July 1998, the Defense-Science Board Task Force, or (DSBTF), released a report entitled “Submarine of the Future”, which offered a view of the submarine’s potential contribution to future US defence needs. It called for traditional emphasis on improving propulsion and acoustics to be relaxed in the near term. The DSBTF argued that the main thrust of future development should be put into improving connectivity, sensors, weapons, ‘adjuvant’ vehicles and ocean interface. SSNs were held up by the Task Force as “a key and enduring element of the USN’s current and future naval force—a ‘crown jewel’ in America’s arsenal”. The panel noted, however, that current designs were constrained by factors which limited their operational flexibility such as stealth although this feature has traditionally limited levels of connectivity.

In October 1999, the Joint Chiefs of Staff, (JCS), studied the options for increasing the size and capability of the submarine force. The three options under review at that time included converting older Ohio SSBNs to SSGNs; refuelling and extending the service life of eight Los Angeles SSNs by 12 years; or building a new SSN, the Virginia class. The fiscal year 2000 Defense Authorization Bill required the USN to study converting four of the oldest Ohio SSBNs into SSGNs, giving them the capability to deploy special forces and fire Tomahawk land-attack cruise missiles (TLAMs).

The NSSN programme design goal is to produce a submarine flexible enough to carry out seven different missions: Covert strike by launching TLAMs from vertical launchers and torpedo tubes; ASW with an advanced combat system and a flexible payload of torpedoes; ASW using the advanced combat system and torpedoes; carrier battle group support with advanced electronic sensors and communications equipment; covert intelligence, surveillance and reconnaissance; covert mine laying; and special ops.iii 30 NSSNare planned, with the first boat SSN-774 Virginia due to be commissioned in June 2004. The last boat, SSN-803, is due to be commissioned in 2020. The JCS Submarine Force Structure Study has called for at least 18 NSSN to be operational by 2015.

The Russian Federation
The Soviet—later Russian–Navy has traditionally been a submarine navy—with front line nuclear submarines their essential naval force. Still, the bulk of the Russian Navy’s submarine fleet is slated for elimination by 2010. As of January 2003, 14 SSBNs were thought to be operational (6 Delta IV, 6 Delta III and 2 Typhoon). In addition, the Navy has 19 SSNs (9 Akula, 5 Victor III, 1 Sierra, 1 Yankee Notch, 1 Yankee and 3 Uniform), and 6 Six Oscar II SSGNs.i

Today, the primary role of Russia’s naval forces is to provide strategic nuclear deterrence from the SSBN fleet and defend the sea-lanes approaching the Russian coast. But in recent years there has been a considerable decline in the number of operational deployed submarines. This is due to the reduction in the defence budget as well as the fact that the Navy receives about 12% of the budget. In 2000, Admiral Viktor Kravchenko, chief of the Russian Navy General HQ, said Russia should possess a powerful naval potential in the twenty-first century in order to provide defence and security. The Admiral called for an operational force of 12 SSBNs as well as 20 multipurpose nuclear submarines to guarantee Russia’s security in the twenty-first century. He also emphasised that the Navy’s share of the defence budget should increase to 25%.

After coming to office in May 2000, President Vladimir Putin set in motion the process of initiating a military reform programme. In all likelihood, then, Russia will maintain a submarine fleet consistent with the Navy’s share of the defence budget and inline with military reform plans. However, economic problems and safety concerns in the aftermath of the sinking of the Kursk SSGN in August 2000 have lead to a large decrease in the number of submarines on patrol. For instance, in 1991 there were 55 submarine patrols but this fell to two patrols in 2001.ii In 2002, according to US naval intelligence, no SSBN went out on patrol.iii

France
The French strategic submarine force FOST currently operates 10 submarines: 4 SSBN (2 Triomphant and 2 L’Inflexible) and 6 Rubis SSN. Of the SSBNs, a third Triomphant was due to launched in 2002 but is behind schedule and is slated for completion in July 2004. France plans to build and deploy a fourth boat by 2008.

The United Kingdom
The Royal Navy currently has a force of 16 nuclear submarines including: 4 Vanguard SSBN and 12 SSN (5 Swiftsure and 7 Trafalgar some of which have been equipped to launch TLAMs.) In March 1997, the Ministry of Defence, (MoD), awarded a contract to BAE Systems for three new Astute class SSN. In January 2001, the keel of HMS Astute was laid down. Construction of the second boat, HMS Ambush, started in 2002, with the third boat, HMS Artful, following later. The MoD is considering plans to acquire a second batch of up to three more Astute SSN with the final decision expected at the end of 2003. Astute will replace the Swiftsure class and will be the largest SSN the Royal Navy has commissioned. Each new Astute SSN will be equipped to deploy TLAMs.

The People’s Republic of China
China currently deploys one Xia (Type-92) SSBN, commissioned in 1988, which is derived from the Han (Type-091) SSN. The Navy fields five Han SSN, the introduction of which improved the Chinese Navy’s defence capabilities. China has one modified Romeo (Type S5G) SSGN with anti-surface ship missiles.

In December 1999 it was reported that China had began construction of the first Type 094 SSBN boat, after preparations in construction were detected by US intelligence. As of December 2000, construction of the first Type 094 had apparently been delayed with priority given to the Type 093 SSN. The Type 93 SSN, which will replace the Han class, is expected to be similar in performance to Russian second-generation subs. Type 093 will be equipped with torpedoes, ASW missiles, a submarine-launched anti-ship cruise missile and land-attack cruise missiles. According to some sources two Type 093 boats are planned, while other sources suggest that as many as six to eight are projected, with possibly four to six Type 093 submarines entering service by 2012. The extended re-fits to Han appears to have delayed the development of the Type 093. US intelligence has estimated that the first boat will be operational soon after 2005.

Israel
Israel, a state thought to possess up to 200 nuclear warheads, may have nuclear weapons capable submarines. The Israeli Navy has three German-built 1,925-tonne Type 800 Dolphin class diesel-electric submarines.i According to reports, the Dolphins may be capable of carrying nuclear-armed submarine-launched Popeye Turbo cruise missiles.ii In May 2000, two Dolphins reportedly carried out first test launches of cruise missiles capable of carrying nuclear warheads. The missiles launched from vessels off Sri Lanka in the Indian Ocean are reported to have hit a target at a range of 1,500km. Israel is reported to possess a 200kg nuclear warhead which could be mounted on cruise missiles. The Israeli Navy has three Gal submarines, built in the 1970s at Vickers Shipyard in the UK.

India
India is trying to develop an indigenous nuclear submarine fleet and reports suggest that by 2010 it may field an SSBN. The country has been working to develop a nuclear submarine since 1985, based on the Soviet-era Charlie II SSGN. The management of the Advanced Technology Vessel project to provide nuclear propulsion has not facilitated this, however. While India has the capability of building the hull and developing or acquiring the necessary sensors, its submarine project has been dogged by system integration and fabrication problems, including trying to downsize the pressurised water reactor to fit into the space available within the hull. Despite these issues, India plans to have up to five nuclear submarines capable of deploying missiles with nuclear warheads.i