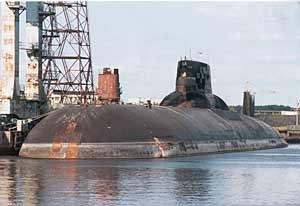 Introduction
The introduction of the first nuclear-powered ballistic missile submarine (ship submersible ballistic nuclear, SSBN) in 1959 changed the course of naval doctrine and strategic weapons system (SWS) development during the Cold War. The idea that developed into the modern fleet ballistic missile (FBM) SWSdesigned to fire a submarine-launched ballistic missile (SLBM)is derived from a German invention in the Second World War. Captured Nazi documents reveal the proposal to mount mortar tubes on the deck of a U-boat. The plan was then to fire the mortars while the tubes attached to the U-boats deck were partly submerged. Based on this concept, the present-day SSBN was born.1

The role of the SSBN
SSBNs are designed to have two roles: a strategic nuclear offensive (first strike) role, and a nuclear deterrent role. The SSBN provides a nations most survivable and enduring strategic nuclear offensive capability, which was especially true for the superpowers during the Cold War. Today, it is one of more survivable legs in the triad of strategic nuclear offensive forces of the United States and Russia, because of extended endurance, quieter propulsion, advanced and secure and constant at-sea communications, radar and long-range FBM SWS. In fact, the most modern of todays SSBNs armed with a full complement of SLBMs can be deployed for between 70-120 days at sea, remaining submerged, in any single operational mission. Each ship typically has two fully trained crews on rotation.

The worlds first SSBNs
In December 1959 the worlds first SSBN, USS George Washington, SSBN-598, a George Washington class FBM submarine, was commissioned into the US Navy. The launch of a Polaris A1 SLBM in July 1960 from SSBN-598 was the first from a submerged submarine. On November 15th 1960, SSBN-598 deployed on operational patrol with 16 x 2,200km-range Polaris A1 SLBMs.

The development of the first Soviet FBM submarine started with a governmental order in the early 1950s for the adaptation of a Project 611 (Zulu) diesel-electric submarine, B-611, to be equipped with the D-1 launch system and two 250km-range R-11FM (Scud) missileswhen armed with a nuclear warhead its range is 150km. B-611 received the tactical designation B-62, a Project 611 A (Zulu IV) with a single R-11FM. In September 1955 the first Soviet SLBM was launched from B-62. From 1955-1958 further testing of the D-1 launch system was carried out. In 1959 B-62 was converted to carry out the first underwater missile firing.

Operationally deployed SSBNs in the declared nuclear weapons sates
The five officially recognised nuclear weapons states, which are signatories to the 1970 Nuclear Non-proliferation Treaty (NPT), all deploy SSBNs. France, the Peoples Republic of China and the United Kingdom followed the US and Soviet/Russian lead and have all developed SSBNs as part of their military doctrines to give them strategic nuclear forces and a credible nuclear deterrent.

The United States
As of January 2003 the US Navy, or USN, deployed 15 Ohio class SSBNs with 360 Trident SLBMs with multiple independently targeted re-entry vehicles, or MIRVs. In spring 2003, the Nevada returned to service, increasing the number of operational Ohio to 16. Of the 18 Ohio built, four are slated for conversion to cruise-missile (SSGN) configuration. The Ohio, commissioned in November 1981, is designed for extended deterrent patrols and provides the sea-based leg of the triad of strategic offensive forces. Each Ohio is at sea at least 66% of the time. One combat cycle includes a 70-day patrol and a 25-day transfer period to the second crew and for re-loading supplies. Ohio is powered by one pressurised water reactor (PWR), can dive to 300m, has a speed of 20-25 knots submerged, a displacement of 16,764 tons submerged, a length of 171m and a crew of 155.

Nearly 50% of the USs total strategic warheads are sea-basedafter the Nevada returns to service in 2003, the Ohio boats have a total of 2,884 MIRVs288 D5 with 2,308 100kt-475kt-yield MIRVs and 96 C4 with 564 100kt-yield MIRVs. Although Trident SLBMs have no pre-set targets when each Ohio goes out on patrol, the SSBNs are capable of rapidly targeting their Trident missiles.

The Russian Federation
As of January 2003, the Russian Navy is thought to have 14 operationally deployed SSBNs with a total of 232 SLBMs containing 1,072 MIRVs. But the Russian Navy is in a serious state of decline and there are serviceability doubts regarding the SSBN fleet. In fact, the bulk of the SSBN fleet is slated for elimination by 2010 and it is likely that Russia will deploy only seven SSBNs (all Delta VI) by then. Still, the primary mission of Russias SSBN fleet is to provide strategic nuclear deterrence and these SSBNs remain the most important (and most survivable) leg of Russias triad of strategic offensive forces.

Each of the UKs four Vanguard class SSBNs currently in service is powered by one PWR, has a displacement of 15,900 tons submerged, a length of 150m and a crew of 135 submariners. Each Vanguard has a16-tube missile compartmentwhich is based on the design of the 24-tube system deployed on the US Navys Ohiofor 16 Trident II D5. The Trident II D5 is a three-stage solid propellant missile with a 7,400km-range and was first deployed on HMS Vanguard in 1994. Each D5 can carry 8-12 MIRVed warheads, although up until 1998 each Vanguard SSBN had a maximum of 96 warheads loaded into 16 D5 SLBMs.

The 1998 Strategic Defence Review (SDR) confirmed that the UKs new nuclear force structure would consist solely of the four Vanguard class SSBN, only one of which is on active patrol duty at any one time. Moreover, D5 took over the sub-strategic role of the WE-177 nuclear-gravity aircraft bomb, as the last WE-177 bombs were dismantled in 1998. By 1998, Trident II became the UKs sole nuclear weapon. As part of the SDRs recommendations, the maximum load of D5 warheads carried on each Vanguard SSBN was reduced from 96 to 48 and each D5 was downloaded to three 100kt-yield MIRVed warheads.

The Peoples Republic of China
Chinas one and only SSBN was commissioned in 1988. It is powered by a single PWR, has a speed of 22 knots submerged, a displacement of 8,000 tons submerged and a length of 120m. The Xia carries 12 JL-1 (CSS-N-3) 1,700km medium-range 200kt-300kt-yield two-stage solid-propellant SLBM, which became fully operational in 1988. It has never sailed outside Chinas territorial waters and presents no credible threat at present to either the USA or Russia.