ST. PETERSBURG—The Murmansk Regional Prosecutors Office has closed criminal case on the accidental irradiation of the workers from the N2 branch of the SevRAO nuclear clean up company that occurred during an 12-person operation to dismantle solid radioactive waste last July at the retired Gremikha Naval Base. Bellona suspects the rationale behind the decision to close the case is unfounded. 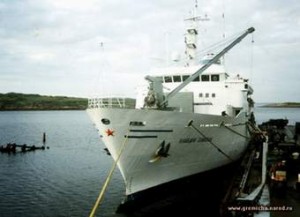 The statement from the Murmansk Prosecutors Office, distributed verbatim by several Russian news agencies, reads that the senior investigator of the prosecutors Special Cases Department Vladimir Bogdanov decided to close the case only having thoroughly examined all the details of the accident and after a court ordered medical examination, carried out in Moscow.

According to the Prosecutors Office, the doctors found no proof that the over-irradiation of the workers of the second branch of SevRAO would have any negative effect on their health.

Based on the medical report and on fact that Bogdanov found nothing untoward in the actions of those responsible for carrying out the radioactive dismantlement procedure, he found no corpus delecti and issued a decision to close the criminal case.

Accident in Gremikha
The criminal case, which was based on the article 293, part 1 of the Russian Criminal Code, dealing with negligence resulting in an essential breach of rights and legal interests of citizens or organizations or the legally protected interests of the society and the state — was initiated on October, 21 2003.

The case was opened as the result of a radiation accident in the closed town Ostrovnoy—also known as Gremikha—which first reported by Bellona Web in September 2003. Bellonas report came as a shocking surprise to officials with the former Ministry of Atomic Energy, or Minatom, who had managed to successfully conceal information about the accident for more than two months.

Through sources in Gremikha, Bellona Web revealed that 12 workers of SevRAO had been irradiated—three of them high above accepted norms—on July 11th 2003 while they were dismantling a dump of solid radioactive waste that had been left in the open on Gremikha territory. They were exposed again on July 14 when the workers put the waste into casks and grouted it with a cement solution.

The solid waste was dealt with by SevRAO was left in Gremikha by the Russian Navys Northern Fleet. In 2001 the former naval base at Gremikha was transferred from the Navy to SevRAO, which was created by Minatom in 1998 for building an infrastructure for decommissioning nuclear submarines, securing their spent nuclear fuel and radioactive waste and for clean-up of dangerous nuclear equipment in the Russias North-West.

But several details of the accident remain unclear. The statement from the prosecutors office concerning the incident, and spread by Russian news agencies, said that 21 workers were irradiated. According to information, acquired by Bellona through its sources in Gremikha, the number of irradiated workers was 12.

The statement reads that soon after the accident the administration of the company sent all the irradiated to a hospital for a thorough medical examination. Bellona Web, however, had learned that the accident victims were sent to an examination only a month after the accident. This was confirmed in September by Valery Lobanov, the chief physician at the Murmansk region’s Medical-Sanitary Unit No. 120, where the workers were first treated.

Moreover, on October 21st 2003 Bellona Web learned that the branch administration of SevRAO in Gremikha had illegally fired three out of the twelve irradiated workers. Facing harsh public criticism, the Gremikha SevRAO administration soon restored them to the work status.

Commentators weigh in
Its rather strange the case has been closed, commented the Gremikha source, who had furnished Bellona with its original information after the accident, in a telephone interview with Bellona Web Wednesday. Some of the irradiated havent yet returned from Moscow, where theyre undergoing medical checkups.

Attracting attention to the accident brought about results—for example, those people, illegally fired in October were restored to the work thanks to Bellonas reporting, he added.

The Gremikha source was also puzzled about the 21 irradiated workers cited in the statement from the Prosecutors Office. Perhaps, having learned about the accident, somebody declared oneself victim, to get indemnity, he said.

Alexei Pavlov, a lawyer with the Environmental Rights Center Bellona, in St Petersburg, said today that Bellona will lodge a letter of inquiry with the Murmansk Prosecutors Office asking on what basis the case was closed.

Anyway, there are reasons to call the Gremikha administration to account, so that such accidents arent repeated. Even if the over-irradiation was not so significant—which itself needs to be proved—it could well be much more serious. The administration can be deprived of its license even for the mere creation of such critical situation—for the total professional illiteracy,

Moreover, all the stuff must be re-examined. The careless attitude toward the radiation, which was the case in Soviet nuclear physicist Igor Kurchatovs time, is inadmissible now.

Article 55 of the Provisions for Securing Radioactive Safety, known by Russian acronym OSPORB-99, reads: for breach of sanitary legislation disciplinary, administrative and criminal liability is set. He stressed that one of the main principles of OSPORB-99 is the necessity
that the dose received by a worker is calculated and established beforehand.

In October, SevRAOs chief engineer Anatoly Grigoriev told Bellona Web that: An unusual occurrence has taken place and the management at Gremikha was unable to evaluate it in the corresponding manner. The management of the facility will face disciplinary action. Addionally, a criminal case for neglect of duty will be filed.”

Before launching the waste dismantlement operation, they should have counted the irradiation dose and minimized it. They had to limit the time that people were in the proximity of the source of iradiation. None of that had been done.

Bellona Murmansk head and radiation expert Sergei Zhavoronkin said the closing of the criminal case was a particular juridical question.

But its a fact, that there was an unplanned irradiation, he said. The question is: what measures of administrative nature had been taken? What disciplinary measures: reprimands, fines? Have the instruction briefings been carried out? SevRAO must answer for this.

Zhavoronkin said that closing the case and even punishing the guilt is not enough. The main issue, he said, is to eliminate the cause of such accidents.

Does SevRAO have specialists and funds to prevent the accident from being repeated? Let SevRAO announce what they are lacking—its important. Have they carried a detailed examination of all their installations? said Zhavoronkin.

I know, that after the accident they got new Geiger counters—but Im not sure that their monitoring team started to perform their work any better, whether theyve got new specialists. I know that radioactive rods were unloaded from the dump manually, without even simple, widely used mecanichal grasping devices. SevRAO workers must be sure, while going to work, that specialists wont allow them to be irradiated and will be able to take measures in a critical situation.

Zhavoronkin stressed that there was nothing that could be classified as secret at the installation.

There is no naval base, only two written-off subs, he said. I appeal to the SevRAO administration—why dont you let a non-governmental organization NGO in? Because not everything is in order? Giving NGOs accesss could facilitate your work—you wouldnt step in the same puddle twice. SevRAO does a very important work — but it shouldnt be done at the cost of peoples health.

Bellona Web will continue to follow the situation at Gremikha.