An old — and some say better dead — idea is having its day again as Arkhangelsk Region Governor Anatoly Yefremov pushes for the shipment of oil and gas on refurbished ballistic missile submarines.

Anatoly Yefremov, the flamboyant governor of Russia’s northwest Arkhangelsk region — home to the flagging Severodvisnk submarine shipyards — is making a push to use nuclear submarines to ship oil, gas and cargo under polar ice to Russia’s far flung northern territories.

The surprise announcement came during a seminar held recently in the Norwegian city of Kirkenes — a mere half hour from the Russian border. The subject of the seminar was a broad view of commercial activities to stimulate the Barents Sea region. For this purpose, Yefremov came prepared with his submarine plan — adding the suggestion that Norway foot part of the bill for the dangerous enterprise.

"We look at it as realistic and economically favourable to use nuclear submarines for oil and gas transport," Yefremov was quoted by news agencies as saying.

Yefremov’s proposal was met with little enthusiasm by Norwegian Minister of Trade and Industry, Ansgar Gabrielsen.

Nevertheless, Gabrielsen and others at the conference recognize that an oil boom from Siberia is just around the corner — especially with the unstable situation in the Middle East following the American invasion of Iraq — and it is predicted by many that Russia may, within the next five years, supply one fourth of the US oil needs.

According to Yefremov, the submarines could take up to 10,000 tonnes of cargo on-board and ship it under the polar ice to tankers waiting in the Barents Sea. These ships — after the considerable engineering required to develop technologies to transfer oil from drilling platforms to the submarines, and, later, to the waiting tankers — would then deliver their cargo world-wide. The only problem, as Yefremov saw it, lay in the financing — which he suggested could come from Norway. 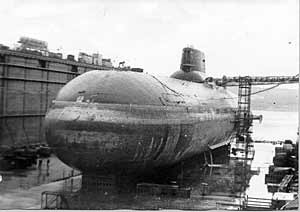 But in early 1990s, the Russian Northern Fleet, faced unbearable economic hardships and no prospects for funding from the federal government. Therefore, the fleet tried to commercialise — unsuccessfully by most accounts — parts of its infrastructure to earn funds for mere survival.

One of these ideas was to use nuclear powered submarines to ship cargo along Russia’s Arctic coast. By 1995, the navy was ready to experiment and sent a Victor III class non-strategic submarine, laden with potatoes and other foodstuffs, over from a Northern Fleet base to Harasavey located on the Yamal Peninsula in North-Western Siberia. Seeing possible profit in the enterprise, Russian gas giant Gazprom and a handful of other private Russian companies financed the trip.

The trip, however, was never repeated — cost overruns and extreme practical difficulties in unloading the subs through their narrow cargo portals made the trip a misadventure.

Five years later, however, in 2000, corporate giant Norilsk Nickel was again ready to take up the submarine transport issue by declaring an intention to fund a $80m study at the Rubin submarine design bureau in St Petersburg to rebuild Typhoon class ballistic missile submarines as underwater cargo transports and tankers. The study came amid a shrill feud between the Murmansk Shipping Company and Norilsk Nickel, which accused the icebreaker operator of artificially increasing its shipment prices.

Rubin took to the task readily, and suggested not only redesigning the Typhoons, but also the Delta class ballistic submarines. Rubin also had on the drawing board a whole flotilla of nuclear powered, underwater tankers. Fortunately, according to many environmentalists, the funding was not forthcoming for this ambitious venture.

But inescapable difficulties remained with redesigning the Typhoons and Deltas for cargo and tanker use: The Typhoons, which is the largest submarine in the Russian fleet, has a capacity of only 10,000 tonnes. A regular surface tanker can hold at least four times that. A so-called super-tanker can carry as much as 120,000 to 150,000 tonnes — figures that case serious doubts on the economic viability of Typhoon and Delta class subs use, which, with their dwindling numbers, cannot compete with even half of the shipments supplied through the surface industry.

Off shore oil drilling
The upcoming offshore oil drilling is likely to start in the shallow eastern sections of the Barents Sea and in the Pechora Sea. These waters can be as shallow as 60 meters and the ice can present additional difficulties, when it can reach 10 meters from the surface.

To operate in these shallow waters the Soviet Union designed a special class of nuclear powered icebreakers. By contrast, a Typhoon is unlikely to operate effectively in 60 metres waters — its drought is over 11.5 metres and length is more than 170 metres, making the enterprise problematic and dangerous.

Another problem not only for the perspective underwater oil tankers, but even for operational submarines is the poor infrastructure, which makes the whole project even more unprofitable.

Condition of the subs
The Soviet Union built six Typhoon class submarines. The average age of these submarines is some 15 to 20 years old. The last Typhoon was commissioned in 1989.

Since then, under cooperative threat reduction, or CTR agreements, with the US government, three of those submarines are scheduled to be retired, and, eventually, dismantled. One Typhoon is currently being dismantled at the Zvezdochka shipyard in Severodvinsk — a less than propitious history for a class of submarines meant to be remodelled to carry oil under polar ice.

Three remaining Typhoons will limp through service at least till 2010. According to experts, there is no upgrade currently available that would make these aging submarines safer for the task Yefromov requires of them.

The Delta-III class submarines — the other prospective work-horse for Yefremov’s oil and cargo transport scheme — are gradually being taken out of service and dismantled by CTR. Three of these subs are apparently still in service in the Northern Fleet, and a total of seven Delta-IV submarines will remain the core of Russia’s strategic forces at least till 2015.

Using these subs as oil tankers, for which purpose they were not originally designed, will not only increase the risk of oil spills but also of radioactivity release in case of an accident.

Practical matters such as poorly trained crews, absent legislation and regulations that will govern the safety proceedings for use of submarines as underwater tankers only worsen the matters.

Counting money
But safety is not the only issue. Russia’s nuclear powered icebreakers have never been welcomed in any international ports. It is unlikely that rebuilt Typhoons will enjoy a warm reception anywhere but in the Northern Fleet bases.

But the hardship is not just a matter of international politics: Last year the Russian Cabinet diverted federal cash usually spent on the upkeep of the icebreaker fleet to a project that envisions the completion of the so-called ’50 Year Anniversary’ — another icebreaker that will be built by 2005.

Even prior to the federal gutting of the Murmansk Shipping Company’s budget, the company — with expeditions, purchases of nuclear fuel, and maintenance — had to make due, according to the company’s general director, Aleksandr Medvedev, with $14.3m a year from federal coffers. The verge-operating budget, however, was closer more than $50m.

To compensate the damage of loosing governmental funds, Murmansk Shipping Company has raised tariffs for shipments in the Arctic. Norilsk Nickel did not object and was silent about an underwater flotilla. The corporate giant even said it would help with funds to complete the ’50 Year Anniversary’. It seemed that the underwater tankers were a history.

And here enters Yefremov, who governs the region, which hosts the city of Severodvinsk. In the Soviet times, when nobody bothered to count money, Severodvinsk shipyards were building of up to 10 submarines per year!

Today the building rates are far from that number with only several new submarines commissioned during the past decade. Thus a project to build a whole nuclear submarine flotilla for oil transport could be indeed a come back given the Soviet Union was still in place and nobody would count money.