Japan to Resume Nuclear Clean Up Projects in Far East

Japan is expected to announce resumed cooperation with Moscow on the dismantlement of Russia’s decommissioned submarines in the Far East at Fridays summit between Japanese Prime Minister Junichiro Koizumi and Russian president Vladimir Putin, sources in the Japanese Government said.

Published on January 8, 2003 by Charles Digges 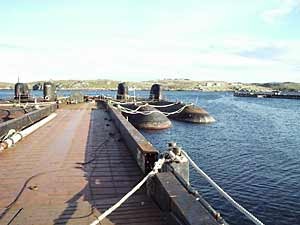 The resumption represents a welcome thaw between the two governments on the issue of cleaning up Russia’s dangerously corroding decommissioned subs — an issue that has been hampered by mutual distrust since Moscow’s security structures levelled espionage charges against now-jailed military journalist Grigory Pasko, whose reports on nuclear waste management in the Russian Pacific Fleet awakened Tokyo’s fears.

–>
The programme, which was frozen last spring, has also been dogged by bureaucratic confusion in Moscow. But since the June announcement by the Group of Eight industrialized nations to contribute $20bn over the next ten years to Russia’s disarmament efforts, Putin has committed more energy to consolidating the efforts of the involved government ministries.


Tokyo has earmarked some $168m for the Japan-Russia Committee for Cooperation in Reducing Nuclear Weapons toward containing threats of nuclear contamination in the Sea of Japan. The most serious of these threats is the 41 rusting submarines that have been decommissioned by the Russian navy, but continue to remain perilously afloat at dockside with their nuclear fuel still aboard.


Many of these subs were slated for destruction with Japanese funding in 1999, but Russia’s concerns with secrecy eroded Moscow’s commitment to the project. As a result, Japan froze its funding.


The Japan-Russia Committee will also establish a new strategy department to strengthen the fund’s auditing procedures, as well as to fortify its authority to ask Russia to disclose information. If the committee fails to meet its goals within five years, the sources told the paper, it will be dissolved.


Russia has long sought to suppress discussion of its Navy’s difficulties in safely dismantling its growing collection of decommissioned submarines. But something approaching openness was achieved over the summer when Russia’s Atomic Energy Ministry, or Minatom, convened an international conference dedicated to the problems associated with decommissioning efforts in the Pacific Fleet.


According to Valery Akhunov, head of Minatom’s ecology and decommissioning department, Russia plans to destroy 131 submarines throughout the navy by 2010. Akhunov has estimated that it will cost $3.9bn to meet that task. But last year, Moscow budgeted just $70m toward improving nuclear safety throughout the country.


Decommissioning efforts at the Zvezda plant at the Bolshoi Kamen base, near Vladivostok, also hang in the balance. Since 1995, Zvezda has been kept afloat largely with American funding. The plant was given the responsibility for cutting up 22 ballistic missile submarines that targeted the United States.


But later this year, the last of these subs will be dismantled, which threatens to leave the plant in the lurch. Russian and Japanese officials, however, say that the remaining tactical and general purpose subs that are awaiting dismantlement constitute no less a security and environmental threat.


This was underscored in recent years when two decommissioned subs sank off the coast of northeastern Kamchatka — one in 1997, the other in 1999. They were quickly raised and the navy claims no harm was done, but they remain an object of concern.


In this sense, the new funding from Japan should breathe new wind into Zveda’s sails as the most likely spot to do away with these remaining submarines.


One of the most pressing task toward doing this, Akhunov has said, is the construction of a storage base for 19 reactor compartments that are now floating in Razboinik Bay near Bolshoi Kamen.


Because Russia has no onshore storage facility for storing decommissioned submarine reactors, the current practice is to slice three compartment sections out of submarines — the reactor compartment in the middle with two compartments on either side to provide buoyancy. The three compartments, which are welded together by steel sheets, are stored afloat.


Construction of the storage facility, which will cost an estimated $70m, is scheduled to begin this year. Russia is also seeking $18m to build a long-term storage structure for two submarines whose reactors were damaged in accidents and emit high radiation. These two subs are kept afloat with pontoons near Bolshoi Kamen.