A little more than nine years ago, during the autumn of 1993, NHK Japanese Television aired footage, recorded by Russian military journalist Grigory Pasko, of a Russian Navy radioactive waste collection vessel discharging some 1,000 tonnes of irradiated water into the Sea of Japan.

Published on October 15, 2002 by Charles Digges 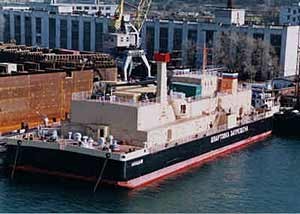 Japanese viewers — who have a keen collective sensitivity to things radioactive — watched in horror as the load of low-level liquid waste, siphoned from the reactors of Russian nuclear submarines, was pumped directly into a stretch of fertile fishing territory largely viewed as the nation’s breadbasket.

More shocking for viewers was that this was by no means an isolated incident. Although the nuclear sewage dump witnessed on television across Japan that evening was the single discharge authorized by the Russian Navy that year, ensuing reports by journalists and environmental organizations and information supplied by the Russian government revealed the waste dumping practices had been the Pacific Fleet’s open policy for more than 20 years and were generally carried out as many as three times a year.

Further, it was revealed by a Greenpeace report that Russian submarine commanders were ordered to jettison cooling water from the 2nd, 3rd and 4th reactor circuits at sea, before arriving at the harbour.

"This was not being done secretly — the news just never reached the Japanese Government, and Japan was shocked," said Junichi Yuba, 35, acting director for the Technical Secretariat of the Japan-Russia Committee for Cooperation in Reducing Nuclear Weapons, an operation run under the auspices of the Japanese Foreign Ministry.
"This news came as a huge impact for the Japanese people because we realized that fisheries and the resources would be affected — it’s just like the Norwegians [who fought nuclear contamination from the Russian Navy to protect their own Arctic fishing waters]," Yuba told Bellona Web in a recent interview in Vladivostok.

As a result, Yuba and a representative of Japan’s Ministry of Foreign affairs, who asked that his name be uses, said that Japan’s Fishing Association applied pressure on the ministry to stem further contamination.

"So an agenda was created on how to prevent such things, and our relationship with Russia was formed and we finally put together some sort of facility for the low-level liquid radioactive waste," said Yuba.

Japanese aid and the Landysh

The TNTs’ counterparts were the Russian Navy’s "plavuchiye masterskiye," or floating workshops (PMs), some of which are still responsible for refuelling submarines. There were two classes of them — Malina class (Project 2020) and Project 326/326M. PMs had reservoirs for spent fuel, for liquid waste and for fresh fuel. The Pacific Fleet had one Malina class boat — PM-74 — and three Project 326M vessels — PM-125, PM-133, PM-80 — and one Project 326 vessels — PM-32. Though they are not responsible for as much of the contamination that the Landysh was installed to avert, they nonetheless — in their irradiated, aged and dilapidated state — contribute to the general nuclear contamination of the area.

None of these vessels have been replaced. The Malina class PM, which was built in 1989 remains in service in Kamchatka, according to Bellona’s latest information.

The standard refuelling process for a submarine is long and hazardous. It takes one month to defuel a submarine. Altogether, defuelling produces around one tonne of liquid radioactive waste. It is, nonetheless, a strictly controlled procedure. Before officers can direct refuelling operations, they have to pass three rigorous exams.

But even with such supervision, the process is dangerous at many levels. Dramatic accidents have already occurred: One submarine reactor exploded at Chazhma Bay during refuelling in 1985.

Risks can come from something as insignificant as personnel misplacing a screw from a reactor, which later becomes a major problem. Removal of spent fuel assemblies and insertion of new ones, for instance, is tricky. When fuel assemblies are inserted or withdrawn, they can tilt. The five-tonne reactor lid is lifted by microns. But PM ships can sway in the water if a smaller boat passes by during the procedure, meaning the crane holding the reactor lid sways too, creating the possibility for accidents.

Where will the remainder of the Japanese money go?
The presence of the Landysh will certainly not attenuate all the nuclear dangers associated with the Pacific Fleet, but both Yuba and the Japanese Foreign Ministry source emphasize that it is in Japan’s interest to tackle as many as the country can.

"Japan is a very health-conscious country," Yuba said. "You can imagine the kind of effect that reports of irradiated fish would have."

But as willing as Japan is to spend the money on these projects, Yuba and the ministry source note that most of the proposals they received from the Russian side are inadequate, and only partially disclose the magnitude and nature of the problems they are applying for funding to solve.

Some two thirds of the Japanese Nuclear Cooperation fund — neither Yuba nor the ministry source wanted to publicize a specific amount — remain to be spent. As the Japanese Foreign Affairs source put it: "One thing I want to be clear about is that we don’t want to retain the money."

But one thing the Japanese government is concerned about is that it cannot administer funding unless all conditions are met, he added.

Yuba noted that these conditions include project proposals that outline efficient administration for project implementation, and also spell-out clear guidelines for financial transparency and complete disclosure of information concerning projects to be undertaken.

Unfortunately for Russia, the list of places to invest is practically limitless, as the literally dozens of funding requests the Japanese government receives from Minatom. As noted, however, most of these projects are not backed by information necessary for their implementation.

One place to start would be the Pacific Fleet’s notoriously over-packed waste storage facilities — one on Kamchatka, at the Gornyak base, the other on the south-east tip of the Shkotovo Peninsula, both of which hold low- and high-level solid and liquid waste — that suffer from chronic leakage problems and transportation woes.

According to Eduard Avdonin, director of Minatom’s International Centre for Environmental Safety, the navy can’t scratch up a mere $7 million to repair a 27-kilometer stretch of railroad track to ship spent nuclear fuel from Zvezda to the nearest railhead that takes the shipments to the Mayak reprocessing facility in the Urals.

The ministry source said that his "wish-list" of projects included investing in that rail line. But even prior to that, he said, he would like to see more openness on the Russian side.

"The Russian side still doesn’t provide enough information to the Japanese government. For instance, how many of those Pacific Fleet submarines awaiting decommissioning and still loaded with nuclear fuel are ready to sink?" the source said.

"This is important so the Japanese side can consider what is necessary and urgent cooperation — it’s better if we have all the information and can decide what is an urgent project. But we still don’t receive that."