During the last six years the number of nuclear powered submarines in operation in the Northern Fleet has reduced by 50 per cent. The work to defuel the old submarines is taking up pace. Even though the management of nuclear waste at the Kola Peninsula is still unsafe, there is a visible progress after Bellona and Aleksandr Nikitin published the legendary Northern Fleet report in 1996.

Published on September 20, 2002 by Thomas Nilsen 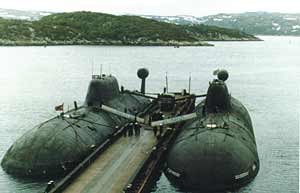 This August six years have passed since Bellona published a report about nuclear safety issues in the Russian Northern Fleet. The work on the report resulted in criminal prosecution of one of its co-authors, Aleksandr Nikitin, who was charged with high treason. Nikitin was fully acquitted and the work to solve the problems described in the report is underway.

In 1996, the report described an appalling situation: retired submarines with nuclear fuel in their reactors laid up along the coast of the Kola Peninsula, huge volumes of radioactive waste stored in open sites.

Today, the USA, EU and Norway are co-operating closely with Russia to solve those major challenges in the northern areas.

Russian government has transferred a part of the responsibility to secure nuclear waste from the Defence Ministry to the semi-civilian Ministry for Nuclear Energy, or Minatom. Although the technical and economic assistance is still being hampered by bureaucratic roadblocks, but everything functions a long way better than it was back in 1996.

The last arms reduction treaty between Russia and the US called Strategic Offensive Reduction Treaty, or SORT, is unlikely to put lower limits on the number of strategic submarines in the Northern Fleet than Russia has already decided to have in the coming 10 to 15 years. The agreement, however, will reduce the number of deployed nuclear warheads down to 1,700 by the year 2007.

Russia is expecting to get even stronger international aid to scrap retired nuclear submarines. At the G8 summit this spring in Canada, President Putin was promised an aid package of $20 billion over 10 years to increase the nuclear security and safety. The initiatives to deal with the retired submarines are the most formulated for the time being.

Delta-IVs to stay in operation until 2015 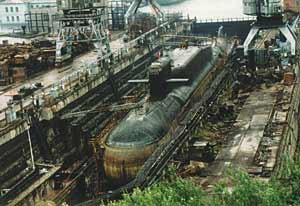 There is also work underway to find the best place for radwaste repository. Among the proposed sites are Novaya Zemlya, Arkhangelsk region and the Kola Peninsula.

After years of research at Novaya Zemlya, Russian Nuclear Energy Minister said this summer that it would be more feasible to build such repository at the Kola Peninsula.