Published on September 4, 2002 by Igor Kudrik 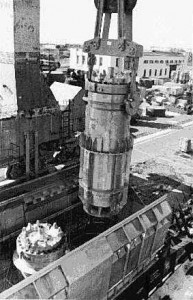 The construction of the unloading site was funded by the USA via Cooperative Threat Reduction Act, or CTR, in consent with a contract signed on May 29th 1998.

Starting in 1992 and until 1997, CTR has been delivering equipment for scrapping ballistic missile submarines (SSBNs) to Zvezdochka in Severodvinsk, Nerpa at the Kola Peninsula and Zvezda shipyard in the Russian Far East. The equipment was used to dismantle five SSBNs. After 1997, CTR started to contract directly with the shipyards themselves and funded the dismantlement of submarines, as the scarce Russia’s budget would not let the work to proceed.

But funding of shipment to the Mayak plant was still not enough. New infrastructure was to be created to ensure that defuelling SSBNs, including Typhoons, could be carried out. Defuelling operations at Severodvinsk were carried out at military site coded “09” The fuel casks were first loaded onboard Malina class ship PM-124, which has been in operation for 20 years without overhaul repairs. Then an old crane — DPK-125 — in a very bad state of repair took empty TK-18 transport containers and placed them into compartment four onboard PM-124 — one at a time. TK-18 was then loaded with fuel and, with the use of crane DPK-124, was transferred into railway car. The site had no pad for intermediate storage of TK-18 containers and hardly met requirements for safe management of spent nuclear fuel.

The brand new $15 million defuelling site sponsored by the USA is located at Zvezdochka shipyard. It is equipped with an 80-tonne crane, an intermediate storage pad for 12 fuel transport casks, a parking area for railway transport cars, and a building where the fuel is transferred to casks. The annual capacity of the site is four Delta class or two Typhoon class SSBNs. The site, however, cannot deal with damaged reactor cores, thus the condition of fuel in laid up submarines should be verified before they are placed for defuelling there.

The site was scheduled for commissioning in November 2001, but due to various delays it was put into operation in August 2002.

The first submarine to be defuelled is Typhoon class — TK-202 — which has been laid up in Severodvinsk since July 1999. In mid June this year it was reported that the works to defuel the Typhoon had been in progress. Apparently, those were preparations onboard the submarine as the defuelling site was not ready by that time. The actual defuelling was to be started last week of August but again the schedule was not followed. According to Nikolay Kalistratov, the manager of Zvezdochka, there are technical problems to match the systems onboard the Typhoon and those in the onshore defuelling site. To resolve the problem one month of work can be required. Should the process go smoothly, the operation takes 67 days.

Russian official sources suggest that all together three Typhoon will be scrapped. Those are TK-202, TK-12 and TK-13. The remaining three Typhoons will perform some testing of new weapons to be placed on newer generation submarines.

With commissioning of the defuelling site the USA may watch only one Typhoon being emptied of spent nuclear fuel and consequently scrapped. Local newspapers in Severodvinsk reported that the bridge separating the Yagry Island, where Zvezdochka is located, from the mainland is in poor condition and requires either an upgrade or total reconstruction. The bridge can hardly be used for the trains laden with spent nuclear fuel crossing it. The situation suggests that the US officials may very well be soon notified that in order to proceed with Typhoons decommissioning more cash is required — this time for the bridge.