Norilsk Nickel, the world’s biggest producer of nickel, want to rebuild the Typhoon submarines into cargo vessels for transport of metal from the port of Dudinka in Siberia to Murmansk.

Published on September 10, 2000 by Thomas Nilsen

Despite the words of financial experts, Norilsk-Nickel continues their plan to convert former navy strategic submarines of the Typhoon class into cargo vessels. The enormous submarine, originally built in the 80ties to carry 200 nuclear warheads targeting North America, could be converted to carry 12,000 tons of cargo. The experts at Rubin Design Bureau in St. Petersburg, which once made the blueprint for the world’s most lethal war-machine, estimate the price of conversion to be $80 million. It’s the missile compartment of the submarine that would be rebuilt to cargo room.

Russia has six Typhoon submarines; three of them still more or less in operation, the three others are taken out of operation. Its these three Norilsk-Nickel want to purchase from the navy, rebuild them at the naval yard Sevmash in Severodvinsk, and start using them for metal transport from the arctic port of Dudinka on the vast Yenisei river. Dudinka is the sea port of Norilsk, the industrial city in northern Siberia, once built by Stalin’s Gulag labour prisoners, today one of the most ecological damaged places on earth. 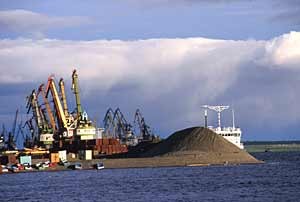 Interviewed by the St. Petersburg Times, Norilsk-Nickel spokesman Anatoly Komrakov says they also fear that LUKoil may give preference to oil development in the Arctic in its allocation of icebreaker time and not cargo vessels from Norilsk-Nickel. LUKoil is developing its Barents and Petchora Sea oil fields and rapidly expanding its fleet of tankers. Therefore, Norilsk-Nickel is forced to look for other options for metal transport out of Dudinka in the future.

Also quoted by St. Petersburg Times, Norilsk-Nickel chairman Yury Kotlyar says: "I think this project (Typhoon conversion) is absolutely realistic. I am certain we will have our first sea trials next year."

The first Typhoon taken out of naval operation is already at the piers of the Sevmash naval yard in Severodvinsk.

Norilsk-Nickel is one of Russia’s most profitable enterprises, with 1999 profits of more than $1 billion. The world price of nickel is some $10,000 a ton.

The Typhoon submarine is 175 metres long, has a displacement of 24,500 tons and can go at a maximum depth of 400 metres. It is powered by two nuclear reactors generating 190 MWt with a shaft power of 2 x 50,000 hp. The first Typhoon was commissioned in December 1981 and the last of the six was commissioned in September 1989.