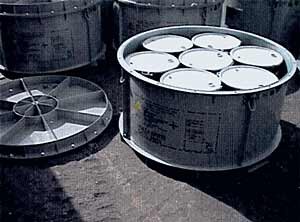 On May 10, experts from the United States, Norway and the Russian Defence Ministry presented 100 containers for storage and transportation of low active solid radioactive wastes at Zvezdochka shipyard.


Vladimir Petrushenko, chief engineer of the shipyard, said that about 100 nuclear submarines of various classes have been taken out of service. Most of them will be decommissioned at Zvezdochka shipyard. A part of the Russian submarines is being pulled out of service in consent with Start-1 and Start-2 arms reduction treaties, the rest were retired due to service time limit.


An international tender on design and production of steel transport containers was announced in June 1999. Companies from the United States, Germany, Czech Republic (Skoda) and Russia competed the bid. Zvezochka shipyard together with Science Applications International Corporation (SAIC) based in the U.S. managed to grab the contract.


Zvezdochka shipyard has now completed the contract for production of 100 transport steel containers. The contract was signed with SAIC and was managed by inter-governmental program Arctic Military Environmental Cooperation (AMEC), which also financed the project. AMEC, established in 1996, is an initiative from Norway, Russia and the United States that works among other things towards securing of radioactive waste in the Arctic region, generated during decommissioning of nuclear powered submarines.


Alexander Dyashev, a representative from the Russian Defence Ministry, said that the first 100 containers would be used at the bases of the Russian Northern Fleet.

Petrushenko said that the plants in the northern Russia involved in decommissioning of nuclear powered submarines, need around 1,300 of such containers.


Zvezdochka shipyard mastered the production of steel transport containers for low active solid waste and is “ready at any time to begin production of the new batch of containers, and also participate more actively in AMEC program.” This statement was confirmed by Andrew Griffith, a representative from the U.S. Department of Energy, who said that it is a big and serious success of AMEC.


Interfax reported, however, that answering the question whether the American government would further finance construction of the containers, Andrew Griffith said that the final decision had not been made yet, but the quality of the work done gives pretty good chances that the funding of the project would continue. This issue will be discussed in Moscow in the coming week.