Russian nuclear officials said preliminarily that the spectacular meteor shower that cut a swathe across southwestern Russia’s Chelyabinsk region, home to dozens of nuclear facilities including the Mayak fuel processing facility remained unscathed by the asteroid pieces that injured more than 400 people. The meteorite, however, hit a mere 90 kilometers south of Mayak.

Published on February 15, 2013 by Charles Digges 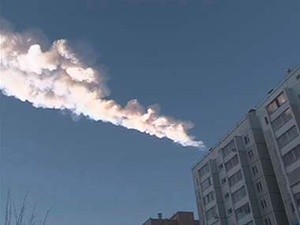 The asteroid shower was seen as far from Chelyabinsk as Yekaterinburg, 250 kilometers to the north, according to Russian media reports and eyewitnesses, and rained debris across one of Russia’s most heavily industrialized areas.

“All of Rosatom’s facilities in the Urals region are working normally. They have suffered no consequences from the meteorite’s fall,” the state nuclear agency, Rosatom, said in a statement released within hours of the strike, which damaged factories, schools and residential buildings. The blast tore the roof off a zinc factory and shattered windows for kilometers around.

In an area as thickly populated by nuclear facilities as Chelyabinsk, Rosatom could be counted as lucky.

No emergency plans for asteroids

A Rosatom spokesman reached by Bellona today said that, “Our preliminary assessment is that no nuclear facilities were damaged – but there are several facilities in the affected area.”

The spokesman, who asked that his name not be used, added that “asteroids and meteorites are contingencies that are so rare they aren’t really planned for in terms of security measures.”

The most infamous nuclear facility in the area, located in the hard-hit Chelyabinsk Region, is the Mayak nuclear-fuel processing plant which houses some 560 tons of spent uranium fuel, 30 tons of reactor grade plutonium and 500,000 tons of solid radioactive waste. It also stores unknown quantities of weapons grade uranium and plutonium.

Mayak was the site of a major accident in 1957 caused some of the worst nuclear contamination in the Soviet Union’s history, second perhaps only to the infamous Chernobyl reactor accident in the sheer volume of the radioactive emissions it released. The accident occurred when a waste storage tank exploded and showered radionuclides throughout the Southern Urals, leaving areas that are still heavily contaminated with radiation even today.

Other sensitive nuclear sites in the area include Lake Karachai – only some 60 kilometers from where the meteorite hit – which Mayak used as a liquid waste dumping facility for decades. Some 120 million curies of radioactivity are concentrated there.

The lake is now desiccated and summer winds carry radioactively contaminated dust particles into the air. An asteroid hit in the lake bed, said Igor Kudrik, an expert on Russia’s nuclear industry with Bellona, could severely exacerbate the amount of radionuclides blown into the atmosphere.

Local NGOsare lobbying for the entire river to be covered by a cement sarcophagus, a la Chernobyl’s exploded reactor No 4.

Other radioactive waste and spent nuclear storage sites that are speckled throughout the region could also have posed a danger.

Today’s meteorite hit was described in local media as a fireball streaking through the sky above the city of Yekaterinburg, followed by loud bangs. Chelyabinsk took the brunt of the impact.

The shockwave from the meteorite blew out windows and rocked a 19-story building in the center of Chelyabinsk.

Most of the some 400 injured suffered minor cuts and bruises from windows that were blown out by the hit.

But some received head injuries, Russian media report. They also indicate that some five to 10 people were taken in for critical care, including a postal carrier who suffered a heart attack after the blast.

“We saw a big burst of light then went outside to see what it was and we heard a really loud thundering sound,” Chelyabinsk resident Sergey Hametov told AP news agency by phone.

Another eyewitness, who was driving when the meteorite hit, told Bellona that the explosion “was as bright as the sun and followed by an intense heat wave – I thought it was a nuclear bomb.”

Asking that her name not be used, she said she was afraid the report from the blast would upend her car.

Officials say the asteroid showers were the result of a large meteor partially burned up in the lower atmosphere, resulting in fragments falling earthwards.