MOSCOW – Energy efficiency promises new growth possibilities for businesses, climate negotiations are in urgent need of completion, and nuclear energy is a world-known Russian brand – all these were prominent themes in Russian President Dmitry Medvedev’s speech at the World Economic Forum Annual Meeting 2011 in Switzerland’s Davos.

Published on February 2, 2011 by Andrey Ozharovsky, translated by Maria Kaminskaya 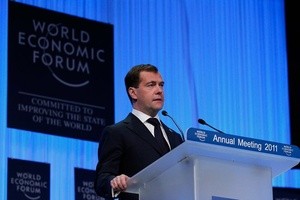 The annual World Economic Forum in the Swiss town of Davos came to a close on January 30. As it often happens, the very task of participating in an international event prompted the Russian president to adopt a slightly different tone for his speeches – the one meant for “foreign consumption,” rather than for domestic audiences.

President Medvedev had a schedule packed with public appearances during the last several days of January. On January 26, President Medvedev addressed the World Economic Forum; on the following day, he gave an extensive interview to Ryan Chilcote of Bloomberg Television; and a few days prior, on January 24, he spokewith the Russian business daily Vedomosti . Most subjects covered in these speeches and interviews concerned politics and the Russian economy, but climate and energy issues – both those that the President touched upon and those that were left on the margins – are of special interest.

Let’s start with the good news. Speaking in Davos, Medvedev zeroed in on energy efficiency as one of the new opportunities that modernisation – one of the core themes of Medvedev’s presidency – affords the development of business in Russia:

“[…] the large-scale energy efficiency programme we have launched opens up new business opportunities. I have set clear quantitative targets, and pilot projects are now underway in many Russian regions. All new projects must measure up to the latest energy efficiency demands. These standards have either already been set or will take effect soon.”

A laudable endeavour, no doubt – but we seem rather to have a long way ahead before being able to make use of global cutting-edge energy efficiency standards. Also, prospects of development of renewable energy sources often follow those of energy efficiency when the latter is mentioned as a possible competitive edge the developing Russia might avail itself of – but not in Medvedev’s speech. Are we gradually forgetting the goal we have set – a measly one, too, compared to the rest of the world’s ambitious commitments – to be producing 4.5 percent of all energy from renewable sources by 2020?

President Medvedev did not mince his words in Davos as he tackled the subject of UN climate negotiations, which have been resisting any tangible progress since the fiasco of the December, 2009, UN Framework Convention on Climate Change (UNFCCC) conference in Copenhagen, Denmark:

“I believe that any delays in this sphere can be dangerous. Our objective is not just to complete the protracted climate negotiations, though this is imperative, but we must also create a common system for monitoring the environment and hazardous sites, and a general warning and disaster management system. Russia has put forward such an initiative, and I hope that our partners will also agree that these measures are long overdue.”

He failed, however, to propose any new concrete ideas on how to achieve headway in climate negotiations. Likewise, no specifics was offered by Medvedev in his conversations with Bloomberg Television or Vedomosti, either. In particular, it still begs clarification just how a monitoring system would help fight climate change – we need to drive down emissions, instead of placing our modest bets with monitoring and emergency management.

This, though, was nothing new: Russia is, as before, lagging behind global efforts to save the planet’s climate, both nationally and in its role as a participant in international negotiations. Russia’s current commitments to reduce greenhouse gas emissions by either 15 percent or 25 percent from the 1990 level by 2020, though ambitious on the surface, conceal the fact that in reality, they would result in the opposite – an increase in emissions compared to current levels.

Medvedev’s climate doctrine remains nothing but an empty promise in fancy wrapping. Plus, none of the stated aspirations seem to be in accord with the policies of the Russian premier Vladimir Putin, whose government is hardly hurrying to make good on the goals of renewable energy development or energy efficiency. In point of fact, Putin has referred to renewable energy as “trifling business.”

All this is patently at odds with global trends. In Davos, UNFCCC Executive Secretary Christiana Figueres said China was becoming a real leader in global efforts to combat climate change. The Chinese, she said, “are not doing it just because they want to save the planet. They are doing it because it’s good for the economy.”

China has for years been ranking first in volumes of new wind power capacities introduced annually, even as meagre Russian projects, such as in Far Northern Murmansk Region, are having a tough time plodding along toward completion. No wonder Medvedev had nothing to say on Russia’s successes in this field.

As he addressed the Davos audience, Medvedev, thankfully, breathed not one word about nuclear energy. Well, that’s a mercy. It could be he considered this controversial topic out of place in the Davos setting, or maybe he simply forgot. Still, he could not help talking about the “peaceful atom” in the interview he gave to Bloomberg Television:

Dmitry Medvedev: […] when we speak about modernisation in general as a development track, it involves first and foremost the modernisation of economy plus those five priorities I have outlined last year, priority areas we are working on now. I’m talking about pharmaceuticals, nuclear energy, energy efficiency and so on. All these things are very important. […]

This is a mistake that has already been made – and it was made on the state level – that nuclear energy, the dangerous outdated technology of last century, should be placed alongside other priority areas in Russian modernisation Medvedev-style. But the new thing here was that Medvedev thinks of nuclear energy as a successful Russian brand.

Dmitry Medvedev: […] I understand that there are areas where we can promote our brands rather quickly since they are already known. For example, our nuclear energy sector is well-known around the world. We build more nuclear reactors than anyone else and we export them, assemble them, and build new atomic power stations.

Oh yes, the Chernobyl “brand” is without doubt well-known around the world. Earlier, in Davos, Medvedev said:

“Modern civilisation is technologically very advanced, at least if compared with the world as it was just one or two hundred years ago. Yet a single natural anomaly or technological error can put entire regions on the brink of ecological disaster and separate continents from each other, as it was in the past centuries. The volcanic eruption in Iceland, a major accident on an oil platform in the Gulf of Mexico, the heatwave in Russia last summer, devastating floods and snowstorms in various parts of the world – it all makes one think about the humanity’s fragility.”

The volcano in Iceland, the oil spill in the Gulf of Mexico, the apocalyptic heat, floods, and snowstorms are all good examples. It’s too bad he forgot to mention that one “technological error” that was forever imprinted on the world’s memory as the Russian nuclear brand: the Chernobyl nuclear disaster of 1986.

Nuclear energy – not a priority, but a liability

As the Russian leaders keep investing their efforts into forgetting nuclear catastrophes and the inalienable risks of nuclear energy, this technology continues to plant the seeds of failure that threaten to upend the very construct of Russia’s modernisation as enthusiastically promoted by Medvedev. In Davos, Medvedev said:

“[…] we will soon establish a special sovereign fund that will share the risks with foreign investors by carrying out joint investment in economic modernisation projects in Russia.”

If new nuclear power plants are included in the number of projects Russia hopes to launch as part of modernising its energy industry, Moscow will be hard-pressed to find foreign investors to participate in the construction – even if it offers shouldering some of the risk burden. A solid confirmation of this can be found in the epic search for investors for Russia’s floating nuclear power plant projects and the newly started construction of Baltic NPP in Kaliningrad Region.

One can only hope that foreign investors will direct their funds into renewable – not nuclear – energy. For that to happen, though, the willingness of Russia’s future partners, which is there, will not be enough – we need the Russian leaders’ political will. For now, this country with vast and various resources seems to have a deplorable want of that valuable commodity.