As the dust settles from President Vladimir Putins March 9th overhaul of government ministries, it is now apparent that both Ministry of Atomic Energy and the Gosatomnadzor, or GAN, have been abolished and incorporated into the new and larger Ministry of Industry and Energy, or MIE, as part of a presidential effort to streamline and consolidate the Russian government.

The sweeping reconstruction resulting from Presidential Order No. 316 on organs of executive power which was issued five days before Putin rolled easily into a second term during the March 14 elections, indicating that the incumbent had little doubt he would remain in power. It remains to be seen whether his massive vertical reshuffle—which places power in far fewer hands—will create a more transparent or a more opaque environment for countries engaged in nuclear threat reduction efforts with Russia.

By late March, it was known that the parameters of Putins across-the-board reforms included reducing the once mighty Ministry of Atomic Energy, or Minatom, to the status of a federal agency—thus removing its minister from a cabinet-level position, and that GAN had become a federal service.

But the shake-up has left several crucial questions that touch on issues from US-Russian threat reduction efforts, to who, in fact is controlling nuclear material within Russias borders unanswered. Minatom—now newly renamed the Federal Agency for Atomic Energy, or FAAE—has for years been the major interlocutor on bilateral nuclear threat reduction efforts between Russia and the US Department of Energy, or DOE, as well as the DOEs counterpart organizations in other G-8 and Western nations

Alexander Rumyantsev, the former Minister of Atomic Energy, has been appointed by governmental decree to stay on as head of FAAE. Former GAN chief Andrei Malyshev also will remain as head of the newly-formed Federal Service of Atomic Inspection, or FSAN, its Russian abbreviation.

As an agency—the bottom of the ladder in Putins new vertical structure—FAAE also no longer controls the activities of the federal services and agencies once under Minatoms control. The new agency also has no control over state non-budgetary funds. Instead, MIE will make plans for the FAAE, and the FAAE will report on progress toward meeting planned targets. According to the Presidential order, agencies will only provide state services and manage state property, as well as compile lists registers and surveys.

As a service, FSAN has slightly more—and independent—functions, which will come as good news to many environmentalists and countries engaged in threat reduction efforts, all of which have lobbied for stronger nuclear regulation than Russias enfeebled former GAN was able to provide after years of Minatom hobbling its authority. Nonetheless, though GAN may have higher status in the new structure, it has, nonetheless, fallen in position overall. 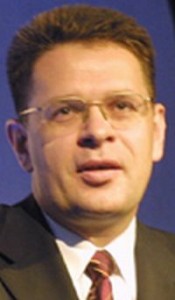 Short and long term threat reduction concerns
For the West, concerns about the downgrading of Minatom from mistrial to agency status come from a well-spring of short- and long-term nuclear threat reduction efforts that, both for ongoing programmes and ones to come.

One concern, pointed out by the RANSAC analysis, was that reorganization, especially during the current period of confusion as to who controls what functions, is disruptive and will continue to interrupt bilateral and multilateral cooperation. Previously scheduled visits to closed cities by western experts, for example, were cancelled after Putins order was issued, the RANSAC report said. In this environment, last summers windfall of nuclear remediation funding for Russia following the Evian G-8 summit may dry up, as investing nations in the G-8 and elsewhere may be reluctant to pour more money into this uncertain situation.

Likewise, official decisions from Russian counterparts in key projects will now be hard to obtain before the dust settles for good.

It is also likely that labor distribution issues within the new Russian government will not be entirely solved in time for this Junes G-8 summit, where key agreements and new issues were planned to be finalized, noted RANSAC.

In the longer term, the distribution of functions between MIE and Defence Ministry will be pivotal, noted the report, and the possible scenarios for this distribution raise several questions.

RANSACs analysis also questioned the highly enriched uranium, or HEU purchase agreement between the US and Russia, wherein Russian HEU is down-blended to low enriched uranium, or LEU, that the United States buys and burns in its commercial reactors. The HEU purchase agreement provides for nearly $10 billion over 20 years and the majority of these funds—not without occasional corruption scandals—has been funneled to Minatom for purposes of consolidating the nuclear weapons complex. How will these funds be used in the future?

Another key issue is the division of MIE Minister Khristenkos own division of labor. As minister of an essentially energy driven ministry, the economically and politically important oil and gas sectors are likely to dominate his energy portfolio, said the report. Many recent reports in the Russian media have indicated that Rumyantsev or one of his deputies may a dual role as a deputy minister to Khristenko, which would be a reassuring move for Russias threat reduction partners.