Norways Halden reactor, which has been under repair for more than six months, was allowed to go back online, despite an acknowledgement from the reactors owner, the Institute for Energy Technology, or IFE, that it is still leaking more than two litres of radioactive heavy water a day, Bellona has learned.

Published on January 31, 2004 by Erik Martiniussen 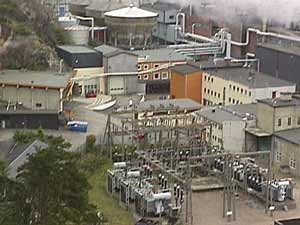 The Halden reactor, located southeast of Oslo near the Swedish border, was shut down after the detection of five fissures in the reactors coolant circuit. The NOK 10m repair job to fix the leaks began in October. A recent document from IFE to the Norwegian Radiation Protection Authority, or NRPA indicated that, in spite of the extensive repairs, the reactor continues to leak heavy water, according to documents obtained by Bellona last week.

Notwithstanding the fact that it possessed this information, the NRPA issued a permit to reactive the reactor.

But Ole Reistad, head of section at the NRPA, said in a telephone interview with Bellona that emissions from the reactor were well within saftey norms.

"The reactor’s leaks are about one fifth of the levels that would be cause for warning," he said.

The IFE added in its documentation indicated that the leakages could even increase in the near future because the sleeve piping is dry. This is because the sockets are dry and might let more heavy water through. The IFE wrote that it will cool the reactor if the leakages levels increase, but gave no indication as to what volume of leakage it considers to be too high.

There is only one other reactor in the world that is comparable to Halden in disposition—Canadas NRU reactor, which is older than the Halden reactor and slated for closure in 2005.

Other reactors older than the Halden reactor are so-called zero- or low-level research reactors, which are reactors made for open basins, with an output that hardly brings water to the boil. Halden, which has an output of 25 megawatts, operates at 30.7 bars of pressure and a temperature of 235 degrees, Celsius. The reactor has been in operation for 45 years.

Foot-Dragging at NRPA
The IFE received NOK 25m in annual government support, but it remains unclear if the company received any extra grants or government subsidies for the repair work.

Bellona has carefully monitored the repair work at the reactor, and has requested at an early stage during the overhaul to be informed about if or when the reactor would be reactivated. Bellona, however, never received this information. It was only on Wednesday, January 28th, that Bellona was sent a copy of the IFE documentation on restarting the reactor.

Reistad, however, said that the NRPA, the IFE, and other concerned government organizations had seen the documents before.

"We don’t consider the descion rapid, because the documents we received on the January 20th we had seen before," he said. "All decisions had been made and all questions answered before January 20th."

But no independent organisations were consulted, and neither Bellona nor Natur og Ungdom, another Norwegian environmental NGO, were given the opportunity to assess the IFE application. Indeed, neither organization was even informed by the NRPA that a decision would be handed down on the reactor that week—let alone, as Reistad saiid, that one had already been made as far back as mid-January.

Marte Hunsdal Knutsen of the Natur og Ungdom responded indignantly in an interview with Bellona Web to the lighting fast decision on the Handlen reactors reactivation.

We were promised these documents more than two weeks ago, she said. I find choosing to reactivate the reactor without informing us extremely worrying.

The NRPA’s Reistad said the NRPA had carried out inspections on the Halden reactor after it was shut down in October, but had not done any of its own inspections after receiving the IFE application dated January 20th. Threfore, NRPA’s decision to reactivate the reactorr was based entirely on IFE documents.

Bellona lodges a complaint
Bellona has now formally asked Norwegian Minister of Health Dagfinn Høybråten for his evaluation of the matter. It was Høybråten who, during his tenure as Minister of Social Services and Health, licensed the ageing reactor.

At that time, openness regarding nuclear safety Norway was strictly observes. Such openness has clearly not been applied relative to this past weeks events.

Bellona has requested all documents regarding this case. The Halden reactor is one of the worlds oldest operational reactors, and Bellona sees cause for alarm in the speedy, closed hearing that decided whether or not Halden would remain operative.

The IFE, for its part, is content that the elderly reactor has been reactivated.

At the IFE in Halden we are pleased that we can start research again, the Haleden reactoes Project Manager Wolfgang Wiesenack said, according to the Norwegian newspaper Halden Arbeiderblad. He said further that the institute has had a certain loss of income, due to the shutdown, but so far no customer has withdrawn. 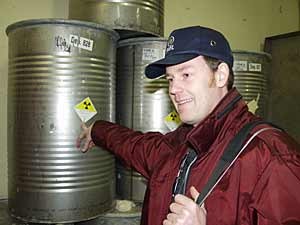 More spillage and waste
The million-dollar repair job to renovate the reactor has added to the waste. Pipelines, contaminated rags, and other components pulled from the reactor during the work has produced some six to seven barrels of low- to medium-activity radioactive waste. This waste will be transferred to the already over-burdened waste storage facility at Himdalen, 50 kilometres east of Oslo.

By reactivating the Halden reactor, Norway can expect more high level atomic waste. Altogether, the Halden reactor has produced approximately 10 tonnes of high level radioactive waste since it began operation. Each year of the reactors operations will generate another 80 kilograms of spent nuclear fuel.

This is waste of a particular sort that must be kept isolated from nature and the environment for thousands of years to come. Sweden is currently planning to deposit its waste in a 500 metre deep bedrock repository.

In Norway, an official committee suggest a new intermediate depository for spent nuclear fuel. The price-tag for such a facility is estimated to be some NOK 1 billion. But the waste needs a permanent geologic repository, and Norways plans for building such a facility are at loos ends.

At present, spent nuclear fuel from the reactor is stored in the town centre off Halden. Spent nuclear fuel is also transported on the highway between Halden and Kjeller on the outskirts of Oslo.

Last autumn, the UN nuclear watchdog, the International Atomic Energy Agency, or IAEA visited the Halden reactor to make sure its waste was being properly stored. This led to a comprehensive report of recommendations, which was submitted to NRPA. Despite the signals of openness regarding Norwegian atomic policy, IAEA report has remained secret and the NRPA will not discuss it.

Decommissioning and demolition
Bellona was recently asked to join a panel formed by the Government to decide what to do with the Halden reactor when it is finally shut down, decommissioned and demolished. Because of the radioactivity of the reactors component, this endeavour will require considerable the technical knowledge of many organisations.

The panel is to be led by Pål Presterud who has a background with the Research Council of Norway. In addition to Bellona, the panel will also include, representatives from the IFE, Statoil, and the Danish Atomic Research Institute near Risø.

Drawing on Danish Experience
The last Danish research reactor, the DR3, was shut down on April 15th 2000. It is thus hoped that Denmarks expertise in such decommissioning will balance out Norways relatively poor knowledge if the field.

Demarks Risø institute ran three research reactors, all of which it has shut down and readied for dismantlement. A recent report suggested that decommissioning the Danish reactors will cost some NOK 1 billion over the next 20 years. A special company Danish Decommissioning has been formed to carry out the work at Risø.

In 1999, Bellona suggested initiating a similar project in Norway to decommission the Halden reactor, including the development of a company similar to Danish Decommissioning, which could develop the know-how to shut down and dismantlement of nuclear reactors.

The main idea behind the proposal was to give the IFF a local commercial alternative as well as a competitive.

The Halden reactor, however, has another five years left on it license, which was last week ushered through the shadows by the NRPA. At the end of that time, the reactor will be 55-years-old. The IFE has already stated it will apply for a new licence in 2008.