Duma Deputy Mitrokhin to Fight for Evacuation of Mayak Area

If you ask Yury Ryzhkov, press secretary for the Mayak Chemical Combine in the Urals town of Ozersk — birthplace of the Soviet atomic bomb project and home to Russia’s single working radioactive waste reprocessing plant — he will tell you there are fewer better places to live.

Published on October 25, 2002 by Charles Digges 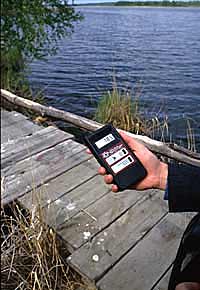 The area and towns surrounding Mayak have been cited among the most contaminated places on earth by many environmental groups, and what medical records are available tell a story of high rates of cancer, radiation poisoning and mutant births, and of severely decreased life-expectancy. Geiger counters brought into inhabited villages surrounding the combine jump off the scale to several times what can be tolerated by humans, and nuclear waste has been stored for decades — as a matter of record and policy — in the open on what is left of Lake Karachai.

But Ryzhkov dismissed this as the hype of the media and western ecological movements at a recent conference on spent nuclear fuel (SNF) in Moscow, where Russia effectively opened its doors to any country that has radioactive waste it wants to get rid of.

Years ago — following a catastrophic accident that eerily presaged Chernobyl — much of the Russian population of this heavily mixed Russian-Tartar area was evacuated for less contaminated climbs. But why that evacuation stopped with the Russians, and what and who remains behind, tells a story of poverty and government cynicism that can scarcely be traced in Ryzhkov’s antic remarks for the spent nuclear fuel freebooters gathered in Moscow last September.

"I have lived in Ozersk for 50 years," said an animated Ryzhkov at the conference beating his chest for emphasis. "Medical records, shortened life spans, children with tails, it’s all mythology." Thanks to the efforts of the Ministry of Atomic Energy, or Minatom, which has jurisdiction over Mayak’s RT-1 reprocessing facility and Russia’s other closed cities, Ryzhkov said, Ozersk "is an ecologically safe place to live."

A short, affable man in his sixties, Ryzhkov could almost have pulled off this real-estate pitch if it were not for the bare facts of the mendacity he was papering over. As if anticipating resistance to his stance, Ryzhkov resorted to the Minatom mantra that the public is beneath understanding such things as nuclear power and reprocessing — leave the whole thing to the men in white coats, who have our best interests in mind, and we’ll all face a clean and lucrative future together.

"These are the usual lies that Minatom tells when they are trying to defend the honour of their ministry," said State Duma Deputy Sergei Mitrokhin, a Yabloko Party member and long-time veteran of Russia’s ecological movement.

According to him, the government will not acknowledge that there are any high illness rates among people in Ozersk, a city of 85,000, or in the rest of the 3-million-strong Chelyabinsk region, where the town is situated.

"It is the policy of the Health Ministry both in the region and on the federal level to keep secret all the data on illness rates and to show that everything is normal and there are no health problems in the region," Mitrokhin, who just returned from a trip to the Chelyabinsk region, told Bellona Web in an interview.

"I think this is a criminal policy," he said. 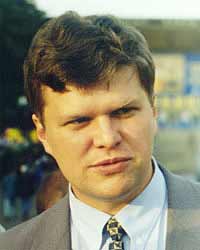 Today, for many outside Minatom, the name Mayak summons nothing but a long history of contamination, accidents and disease.

Between 1949 and 1956 amounts of liquid radioactive waste from Mayak were discharged into the river Techa. The continued operation of the reprocessing facility leads to further routine discharges to the environment. In two major accidents at the facility, large amounts of radioactivity were released into the water, which fed farming communities to the south of Ozersk.

There have also been a number of other accidents of varying severity at the Mayak facilities. At one point, an area of as large as 26,700 square kilometres has been contaminated with a total activity of 185 PBq. Later, an estimated radioactivity of 5,500 PBq has been released into the environment, of which 4,400 PBq went to Lake Karachai.

Following the development of more simplified techniques for the handling of liquid radioactive waste from reprocessing plants, and the concept of dilution as a principal method of disposing of such waste, large amounts of medium- and high-level liquid radioactive waste were discharged into the Techa River approximately six kilometres from its source.

Over 95 percent of the waste was released into the river in the period between March 1950 and November 1951 as a consequence of insufficient purification techniques. After November 1951, high-level waste was dumped into Lake Karachai instead, and this practice was continued until 1953 when a temporary storage facility was constructed. However, low- and medium-level waste continues to be dumped into the lake.

Approximately 76 million cubic metres of liquid radioactive waste with a total beta activity of 100 PBq were discharged into the Techa River altogether. The waste is mainly a mixture of strontium, caesium, niobium, and ruthenium. About 25 percent of the activity consists of 90Sr and 137Cs.

The 124,000 people living along the banks of the Techa at the time felt the greatest impact of this radioactivity. Here the levels of radiation were so high that 28,000 residents received doses that were significant for their health. From 1953 onwards, the river could no longer be used as a source of drinking water, and in the years up to 1960, 7,500 residents were evacuated from their villages along the riverside.

Barbed-wire fences were erected on both sides of the Techa River and it was prohibited to fetch water or to fish there. Yet the area residents were never apprised of the fact that the river had been contaminated by radiation and most disregarded the bans.

Certain mostly ethnically Russian villages from the riverbanks were evacuated, while the Tartar inhabitants of certain others remained. Those residents who were evacuated had received effective radiation doses in the range of 0.35 Sv to 17 Sv, with the largest doses having been received by the 1,200 inhabitants of the village Metlino. The bulk of these doses was received during the first few years.

Of the remaining groups in the area who had not been evacuated, the residents of the almost exclusively Tartar village of Muslyomovo were most exposed. Muslyomovo is situated 30 kilometres downstream from Mayak, and in 1949 it had a population of 4,000 inhabitants. By 1990, the number had fallen to 2,500 residents.

In 1993, the administration of Chelyabinsk region passed a resolution to evacuate Muslyomovo and to build a new village for the residents further away from the Techa River; however, as a result of economic problems, the resolution never materialised.

Dams and reservoirs were built along the Techa River to contain radiation, but to little effect. One of the dams was built in the middle of Muslyomovo, which straddles both sides of the river. The dam opened in 1968, and areas on both sides of the river that had previously been below water level were taken into agricultural use. Sediment samples taken from the riverbanks above the dam indicate activities of 400,000 Bq of 137Cs per kilogram of soil, and 120,000 Bq of 90Sr per kilogram of grass — levels extremely dangerous for human health. Nevertheless, farm animals continue to graze in this area and people continue to live there.

Another solution to the Techa contamination problem that Minatom came up with was to dump waste, beginning in 1962, in a nearby closed water source — Lake Karachai. But the years from 1962 to 1966 were a period of relatively low precipitation and the corresponding run-off into the lake was very low. In the spring of 1967, part of the lake evaporated and land that had formerly lain underwater was exposed. Unusually strong winds swept up radioactive particles from the lake sediments and spread them over an area of 1,800 square kilometres.

The radionuclides carried away by the wind were mainly 137Cs and 90Sr, with an estimated total activity of 22 TBq, meaning that many of the same areas that had been affected in the 1957 Kyshtym accident were, therefore, impacted again ten years later.

In all, the accidents described above, along with discharges from routine operations of Mayak, have contaminated a total area of approximately 26,000 square kilometres with a total radioactivity of 185 PBq. Approximately 500,000 people have been subjected to increased levels of radiation, and of these, 180,000 were evacuated.