An Italian barge and floating dock designed for Russia to further assist in transporting Soviet legacy nuclear waste to safe storage will soon be towed to the port of Murmansk, Russian news agencies have reported.

Published on February 19, 2016 by Charles Digges 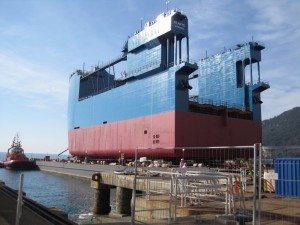 An Italian barge and floating dock designed for Russia to further assist in transporting Soviet legacy nuclear waste to safe storage will soon be towed to the port of Murmansk, Russian news agencies have reported.

Though its arrival date is still unspecific, the vessel, called the Itarus, will be put to use shuttling reactor compartments from dismantled nuclear submarines to Russia’s northerly Sayda Bay storage site run by SevRAO, the northern branch of RosRAO, a Russian state nuclear waste handling contractor.

The Itarus has also been billed as a valuable tool in lifting sunken nuclear reactors, scuttled nuclear submarines, and other radioactive litter dumped by the Soviet Navy in Arctic waters over decades, according to Anatoly Zakharchyov, head of Russian nuclear state corporation Rosatom’s engineering division for complex submarine dismantlement, Russian media reported. 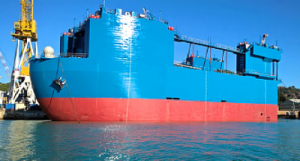 Rosatom has yet to decide where this seafloor waste will be stored, though Zakharchyov has broadly hinted such undersea finds should go to the Gremikha naval nuclear waste storage facility.

The Itarus is capable of carrying loads of 3500 tons.

RosRAO said in a Russian release Wednesday that the Itarus had put to water on November 15, and that final technical details are being addressed before it’s towed to Northwest Russia. The Russian crew that will staff the vessel is currently completing its training, RosRAO said.

Nils Bøhmer, Bellona’s executive director and nuclear physicist, said the Itarus “should be a good project as it will ensure safe transport of radioactive reactor compartments to storage at Sayda.”

“Bellona has since the early 1990’s argued for a safe dismantlement of laid-up nuclear submarines, with the storage of reactor compartments on shore,” he said. “This is what is happening now,”

Andrei Zolotkov, a nuclear adviser with Bellona based in Murmansk, said by email that most of this transport work has been the job of the Pallada, a similar floating dock type ship to the Itarus.

The drawback is that the Pallada is owned and operated by the Nerpa Naval Shipyard.

Zolotkov said the eventual arrival of the Itarus could relieve SevRAO from it’s dependence on other organizations and businesses to haul waste.

He was cautious, however, to agree with the assertions of Rosatom’s Zakharchyov that the Itarus would be doing any heavy lifting of discarded Soviet nuclear naval trash in the Kara and White Seas – which included two entire nuclear submarines.

“Using the Itarus to raise sunken [nuclear] objects – it’s not going to be able to do that independently,” of various government agencies and additional technology, Zolotkov said by email. “It could be used as a means to transport these raised objects.”

A photograph of the K-159's conning tower taken during a mission to inspect its condition. (Source: Blogger51)

Its most important contribution to retrieving the Soviet Navy’s sunken toxic treasure would be to spark more discussion about how that should be done, said Zolotkov.

“This is something that depends on Rosatom’s activities,” he said.

Zolotkov said Rosatom should finally make good on years of promises to raise the waste – and decide what equipment it would use to do so.

Joint Russian and Norwegian expeditions to the K-27 and another sunken sub, the K-159, suggest neither pose imminent contamination risks.

But experts on both sides agree it’s better to get them out of the water sooner than later, before radioactive leakage becomes an urgent problem.

The Italian Government has financed the Itarus for an undisclosed amount. But it’s part of a donation toward multilateral nuclear cleanup efforts agreed to 12 years ago by the Group of Eight industrialized nations, nuclear.ru said.

Delivered to Russia in 2011, the Rossita saw no active duty until three years after it’s arrival in Russia.

In 2014, Russia finally put it to work transporting solid radioactive waste from submarines at Gremikha to storage at Sayda Bay.