MURMANSK – Under a new schedule, the notorious Lepse nuclear service vessel will in late October finally be put into dry dock at the Nerpa Shipyard, and the hazardous process of dismantling it is to start in December, a shipyard official told Bellona in an interview.

Published on October 5, 2014 by Anna Kireeva 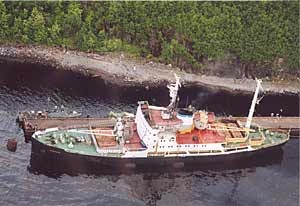 MURMANSK – Under a new schedule, the notorious Lepse nuclear service vessel will in late October finally be put into dry dock at the Nerpa Shipyard, and the hazardous process of dismantling it is to start in December, a shipyard official told Bellona in an interview.

The new dates represent delays to the dismantlement schedule presented at a joint conference held by Bellona and Russian state nuclear corporation Rosatom in Murmansk last March. But the inking and signing of new contracts and licenses for the task, which had run out, is currently underway.

Oleg Erin, who is leading the Lepse dismantlement project at Nerpa, located in the Murmansk Region town of Snezhnogorsk, told Bellona in an exclusive interview that the delay resulted from having to obtain an additional license allowing the shipyard to work on the decayed nuclear storage ship brimming with spent nuclear icebreaker fuel.

The shipyard didn’t know it was lacking the license until the end of 2013, said Erin, and applied for it immediately with the Rostekhnadzor, Russia’s nuclear watchdog agency, at the beginning of the new year. Processing the document took nine months. This led to an updated on the work schedule. As such, everything is currently running on schedule.

The works that will begin on the Lepse will commence from several different fronts simultaneously. Specifically, the vessel has to be berthed in a special floating dock, which will take place this month, and equipment and machinery is getting lined up , and all necessary arrangements to the slipway onto which the Lepse will eventually be take to dry land to complete end-stage dismantlement of metal structures on the vessel are underway. The coordination for the contract to dismantle the ship on dry dock is currently being negotiated.

To put the ship into the slipway to dry dock, preparations are necessary for moving the floating dock. What happens next is a potentially dangerous stage in putting the Lepse into the dock, and then situating the dock at a wharf-side wall from where a type of railway system will re-situate the vessel on the dry dock for further dismantlement.

At this point, the dry dock must be outfitted with all radiation safety systems. Nerpa project leader Erin told Bellona that work is actively continuing in that direction.

For several months already, the shipyard has been dealing with fabricating metal structures in which to put the Lepse’s bow and stern areas are to be packed after they are cut free of the ship in dry dock.

“These metal structures weigh more than 1000 tons and must be completed before the ship is situated in dry dock, and they have been in production for several months,” said Erin.

Once in dry dock, Nerpa will move forward in its safety regime during the Lepse’s “hibernation” period: This will entail concerns about keeping the vessel defrosted, and providing additional technical and biological protection for unshielded block packing of the sections, and initializing the fire safety and radiological hazard systems.

Presumably, these preparations will last until December 2014.

Erin said that by December, the vessel should finally be ready for dismantlement, as well as all the required documents to carry it out.

“If all goes well, we will be able to proceed directly to the ship’s dismantlement in December this year, ” said Erin.

It’s assumed that the dismantlement of the remaining superstructure of the vessel will run from December to February 2015. As spring approaches, the sawing of the vessel into 5 parts will commence and this process is expected to run through the remainder of 2015.

“If all goes well, we’ll dish up the first block packing containing the stern by the third quarter of 2015,” Erin said. “Upon confirmation of funding from [Russian state nuclear corporation] Rosatom, we will transfer it to storage at Sayda Bay.”

The bow’s block packing with spent nuclear fuel in it will await the completion of a specially designed shelter on the dry dock, which will take place between 2015 and 2014. The shelter will serve as the operational headquarters for unloading all spent nuclear fuel stored aboard the Lepse, after which the packing will be transferred to Sayda Bay.

Erin told Bellona the entire radioactive vessel should be dismantled by 2017, when a block container loaded with the vessel’s bow is shipped to Sayda Bay, and the spent nuclear fuel the vessel contained makes the journey to the Mayak Chemical Combine in the Urals via the Atomflot icebreaker port in Murmansk for reprocessing. A schematic of how the Lepse will be cut up into sections. (Graphic: Bellona)

Andrey Zolotkov, director of Bellona Murmansk, said there was no reason to be optimistic about the now-planed 2017 finish date. The original dismantlement schedule, presented in 2010, including an operations timeline for sawing the Lepse’s hull apart, and prepping the bow for the removal of the spent nuclear fuel it holds. This part of the program should have begun exactly two years ago.

Environmentalists: The most important aspect is safety

“Working with the Lepse encompasses a broad array of operations, chiefly the so-called emergency unloading of the damaged spent nuclear fuel assemblies it contains,” said Zolotkov. “Additionally, these operations will be carried out in an ‘uncomfortable’ radiation environment and there may be unforeseen situations.”

Zolotkov said that dealing with the spent fuel on the Lepse is not akin to performing “a Soviet five-year plan in three.”

“A more applicable adage they should observe is ‘measure seven times – cut once,’” said Zolotkov. “In conditions of a high dose load (irradiation) there may be a shortage of qualified specialists among the personnel.” The Lepse being towed out of Murmansk’s Atomflot port, where it languished for 20 years, to Nerpa in September 2012. (Photo: Bellona)

Zolotkov said he’d also like to see one more public hearing of the environmental impact study for the hazardous radiological dismantlement project before it begins.

“A lot in can change over seven years in terms of technical decisions in dealing with specific operations,” he said. “Sure, conduction [public hearings] could feed gossip and rumors – but openness is Rosatom’s new trend.”

It’s been nearly two years since the Lepse was hauled from two decades of bobbing in Murmansk harbor loaded with spent nuclear fuel.

But when the vessel reached Nerpa it ran into one problem after another, some financial, some relative to the massive scale of producing metallic chambers to hold the vessel’s sections, and finally, parking problems: the dry dock mean to house the Lepse during the course of its dismantlement was occupied by the Leninsky Komsomol, Russia’s first nuclear submarine, which became the subject of a heated argument over scrapping the vessel, or preserving it as a museum piece. The long quarrel between Rosatom and the Ministry of Defense was finally resolved when the Ministry said it would convert the old sub into a museum, freeing up the dry dock for the Lepse.

According to Nerpa’s Erin, the shipyard had received no confirmed documents that had passed through the necessary state studies outlining the dismantlement schedule until January 2014. In this limbo, it was impossible to say whether the Leninsky Komsomol would continue to occupy the dismantlement dry dock or not.

“Now, after receiving the confirmed schedule, we see that the submarine and the Lepse won’t interfere with each other while operations are carried out,” said Erin.