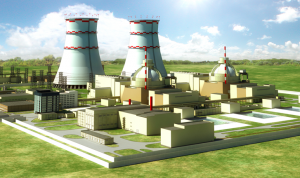 A mock-up of the new Smolensk NPP with two VVER-TOI reactors. (Source: Rosenergoatom)

SMOLENSK, Russia – In the course of public hearings on equipping the new Smolensk Nuclear Power Plant (NPP) with the experimental VVER-TOI reactor, Russian state nuclear corporation Rosatom continues to perpetuate the illusion of environmental safety and the economic feasibility of building the new station by continually referring to non-existent prohibitions to alternatives and dreams of “safe” radioactive waste.

On September 17, Roslavl held two separate round table discussions, each devoted to building the first and second rector units at the new NPP. A Bellona representative is participating in these events. Materials for the Substantiation of a License (or MOL in its Russian abbreviation) were furnished for discussion, and have been published on the Roslavl district’s website (in Russian).

What should replace the old reactors?

Two of the three outmoded Chernobyl RBMK-1000 type reactors operating at the Smolensk NPP, located near Roslavl district town of Desnogorsk, should be taken out of service within the next 10 years. Making up the projected 2000 MW electrical power loss that will be brought about by the shuttering of these reactors can be achieved in many ways. But Rosatom insists there is only one route – building an entirely new nuclear plant, the Smolensk NPP 2.

“The purpose of the constructing power units No 1 and 2 of Smolensk NPP-2 is the timely replacement of the [current] Smolensk NPP units at the end of their engineering operation periods in 2022 and 2024, respectively,” the summary of the MOL to build the new nuclear blocks as presented at the public hearings read.

Natural gas station tops uranium, but not for Rosatom

The thesis forwarded by the nuclear industry, which doesn’t correspond with reality, is that old nuclear reactors must be replace with new nuclear reactors, and not, for instance, modern combined cycle turbine natural gas plants. The author of the MOL justifies Russia’s nuclear utility Rosenergoatom’s acquisition of the license to build the new reactors by simply excluding the notion of a thermal power plant altogether as an alternative.

Accomplishing such legerdemain is no easy task, as the construction of a natural gas plant is significantly cheaper, their efficiency much higher than nuclear reactors. Electricity produced by gas plants with air to oil intensifiers, taking as a whole all direct and indirect costs – such as production, transportation of raw materials, and waste management, as proved in the Bellona report The Economics of the Russian Nuclear Power Industry – are far less costly to consumers. Further, their construction takes far less time, and they can be included in thermal energy production for industrial and large cities, such as Smolensk, the region’s center.

Additionally it should be recalled that the Smolensk Region is host to several gas pipelines, including those that export natural gas to Belarus. Pursuing a non-nuclear option in Smolensk would therefore create a solid opportunity to constructing a natural gas-based power plant.

Recently, a similar project comparable in scope and power production to a nuclear power plant was implemented in the Russian enclave of Kaliningrad – the Kaliningrad Thermal-Electric Power Plant -2, with a 585 MW capacity, a thermal power capacity of 680 GigaCalories per hour – the first block of which was commissioned in 2005 and the second in 2010. To exclude a real alternative to nuclear power plants, such a natural gas plants, and restrict the discussion to comparing them only to dirty coal-powered plants, Russia’s nuclear lobby has begun referring to non-existent “restrictions” on the use of gas power. In order to justify the refusal to even take gas-powered plants into consideration, section 4.1.3 of the MOL distributed for the public hearings included a section called “Good alternative energy options in the region.” Page 19 of the MOL’s first volume states mendaciously that, “Restrictions on the use of gas for new electrical power plants […] is dictated by resource constraints, the high and gradually rising prices of gas on the world market, and the aim of increasing [gas’s] export.”

But none of the elements of this statement is really adequate. There are no “resource constraints.” In fact, a number of gas fields in Russia are not producing precisely because the market is oversaturated, and the price of gas on the world market as a consequence is dropping. Just look at Russia’s copious exports of natural gas via pipeline to China. The supposed “aim” of increasing gas exports is further occasioned by the hopes of traditional Russian gas customers – such as Ukraine, Belarus, and a number of EU countries – to drastically reduce their dependence on Russian imports.

To assert with a straight face that there are “restrictions on the use of gas for new electrical power plants,” one needs documentary proof of such restrictions.

As it stands, the statement is completely without basis and is nothing but misinformation aimed at fooling people as well as decision makers. During the April hearing on the Smolensk NPP-2, Bellona’s representative asked if such documents were available for public viewing, and if, in fact, such documents actually exist. Here’s a snippet of the transcript of the hearings as the question is addressed to Viktor Shkalenkov, deputy director of projects at the Kursk and Smolensk NPPs.

“Bellona’s question: The environmental impact assessment (on page 8 of volume 1) refers to ‘the restrictions on the use of gas [to substitute] for new power plants.’ Is there a law or regulation or any other document that establishes these restriction?|

Shkalenkov’s answer: We answer that there is no such document and suggest the question be stricken.”

So, back in April, we got the answer – there is no document establishing that gas power cannot substitute for nuclear, and that the suggesting that there was turned out to be a Rosenergoatom fabrication.

But the nuclear industry hasn’t come up with a better way of excluding a more acceptable option for a replacement power station running on natural gas from consideration, so again, the new study for the Materials for the Substantiation of a License, we again see the buffoonish, fictitious repetition of invented “restrictions” and “limitations” on building gas powered plants.

Society as a whole has an interest in choosing a balanced and reasonable energy strategy at both the federal and regional level. To do this, we must honestly consider and compare all the alternatives. It is necessary to listen to and take into account comments of opponents and to abandon tactics of disinformation and manipulation. It is a sad state of affairs when, in the case of the second of the Smolensk nuclear power plant, that has not come to pass.

3,000 tons of radioactive waste per year

Somewhat better is the situation with the assessment of the quantity and quality of radioactive waste for the new nuclear power station. At a hearing in April, Bellona pointed out the absence of data on the volume of waste, its weight, radioisotope composition, and total and specific activity. In the new Materials for the Substantiation of a License, data about the volume of waste has been published, indicating that each unit will annually turn out about 3000 tons of radioactive waste – but other important information is still lacking.

Section 3, volume 1, pages 11-17 of the new Materials for the Substantiation of a License provides information about radioactive waste handling activities to be that would be undertaken: “The volume of waste to be disposed of is not more than 44.5 m3/year from one unit (excluding radiation -contaminated equipment and tools, formed as a result of repair and maintenance work). ”

Thus, the total amount of waste to be disposed of within 30 years of one power unit’s operation would be 1335 m3, and over the course of 60 years – this being the engineered lifespan of the new nuclear power plant) – total waste production would be 2670 m3. A mock-up of the new Smolensk NPP with two VVER-TOI reactors. (Source: Rosenergoatom)

Of course, the waste will be subjected to “conditioning” – industry-speak for evaporation, compression, combustion, and eventual cementing. But evaporation is not suitable for liquid waste containing tritium and pressing and burning hardly reduce the volume of waste by the predicted 70 times.

‘Safe’ radioactive waste will be disposed at the plant in plastic bags?

It’s surprising that Table 3.1’s graph entitled “hazard characteristics of wastes” even intermediate and high-level waste, states simply “absent.” Are we to think that Rosenergoatom considers all future waste from the plant to be non-hazardous?

“Disposal points for very low-level waste are designed to receive and securely store nuclear waste from the NPP, which is contaminated by radionuclides, not removed from radiation monitoring. The accepted period of operation of points of storage for very low-activity waste is 60 years.”

It goes on to say that, “Waste for storage is selected in two ways: organized interment of waste packed in soft containers with a top hatch and insert type MKR 1250 A4; Bulk landfilling of waste in bags or plastic film.”

Thus, predictions by environmental organizations have turned out to be true: the territory of the nuclear power plant will, to begin with, be a very low-level waste repository.

Bellona will again be asking questions at the upcoming “round tables” and will submit arguments against plans to build new reactors.

But Rosenergoatom representatives and employees of the Smolensk NPP, which usually constitute the majority of participants in such activities, are unlikely to be interested.