The Rossita nuclear waste transportation ship – donated to Russia by Italy in 2011 – has finally completed a first mission, transporting parcels of solid radioactive waste from submarines at the former naval base of Gremikha to storage at the newly modernized Sayda Bay storage facility, the b-port news portal reported. 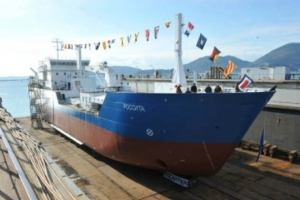 The Rossita nuclear waste transportation ship – donated to Russia by Italy in 2011 – has finally completed a first mission, transporting parcels of solid radioactive waste from submarines at the former naval base of Gremikha to storage at the newly modernized Sayda Bay storage facility, the b-port news portal reported.

Sayda Bay, a former fishing village annexed by the Russian Navy as a long-term storage site for the hulls and reactor compartments of decommissioned nuclear submarines – long remained one of the world’s worst radiation hazards.

But a €700 million German effort to build an onshore sub reactor compartment storage facility and transportation infrastructure that links Sayda Bay to rail for further transport of spent nuclear to the Mayak Chemical Combine in the Urals has eased the situation. Subs laid up at the former Russian naval base at Gremikha. (Source: Bellona)

That the €70 million Rossita, which has been in Russia’s hands for more than three years, had seen so little action had troubled Bellona general director and nuclear physicist Nils Bøhmer.

The ship was constructed for the express purpose of removing solid nuclear submarine waste and spent nuclear from the shores of Russia’s numerous former submarine bases and radioactive storage sites in Russia’s Northwest – a project that, even after billions of dollars of investment still remains urgent.

The Rossita was given to Russia as part of Italy’s commitment to the former G-8 Global Partnership plan to infuse $20 billion into funding post-Soviet nuclear remediation projects between 2003 and 2013.

Launched in Italy in 2010, the Rossita was transferred to Rosatomflot in 2011with the aim of transporting containers of spent nuclear fuel from submarines from such infamous storage as like Andreyeva Bay, Gremikha, and Severodvinsk.

As of February 2013, the vessel had languished without being put to work and then ended up in dry dock for repairs.

Russian President Vladimir Putin’s annexation of Ukraine’s Crimean Peninsula in March, and subsequent fomenting of pro-Russian separatist movements in Eastern Ukraine with a inundation of anti-western propaganda, culminated in Moscow’s ouster from the G-8, something environmentalists feared would grind western assisted nuclear remediation efforts to a halt.

Hostilities between Russia and Ukraine reached new heights Friday in the downing of a Malaysian jet liner by pro-Russian Ukrainian separatists with a Russian missile, killing all 298 passengers and crew. Evidence indicates separatists thought they were firing on a Ukrainian cargo plane, according to numerous western reports.

“In light of current tensions between Russia and the rest of the world, it is very good that the Rossita is finally being put to its intended use,” said Bøhmer.

The Rossita returned to port at Murmansk’s Atomflot icebreaker facility on Monday after delivering the load of unspecified solid nuclear waste from the Gremikha, b-port reported. Gremikha’s clean up falls under the purview of SevRAO, the Northern Federal Enterprise for the Handling of Radioactive Waste. The Rossita leaving Italy in 2010. (Source. Courtesty of the Barents Observer)

The Rossita was built by Fincantieri at the Mudzhano shipyard. The contract for its construction was signed by between deputy director of Russia’s state nuclear corporation Rosatom Yevgeny Yevstratov, and Giovanni Battista Narbone, head of the industrial policy management department of Italy’s Ministry of Economic Development in April of 2008.

The Rossita measures 84 meters in length by 14 meters in width and has two temperature-regulated cargo holds. It can carry up to 720 tons over distances of up to 3000 kilometers.