The nuclear service ship Volgodarsky will be entirely dismantled by the end of 2014 – possibly as early as the end of autumn – the b-port Russian news portal reported Wednesday. 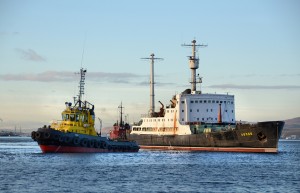 The nuclear service ship Volodarsky will be entirely dismantled by the end of 2014 – possibly as early as the end of autumn – the b-port Russian news portal reported Wednesday.

Developments with that vessel continue to disappoint.

The radioactive hazard, which was finally towed out of the Atomflot icebreaker port in September 2012 after 25 years of environmental pressure led by Bellona, has since bobbed a quay side awaiting a dry dock that is currently occupied by the Leninsky Komsomol,  the Soviet Union’s first nuclear submarine.

Promises that the Lepse  and its cargo of 639 fuel elements –many of them damaged –would finally be put into dry dock by May have passed without note. Arguments with Russia’s Defense Ministry over whether the Leninsky Komsomol will be cut up or turned into a museum piece continue.

Kovtun praised the progress of the Lepse project during her visit, b-port reported (in Russian). But the current state of dismantlement remains essentially where it was in 2013, with technicians removing portions of its upper deck while as the ship remains on water.

Bellona’s general manger and nuclear physicist said, “It’s good to see that there is progress on dismantlement of these rusty old service ships, which constitute huge radiological hazards.”

He added that “Bellona will  be especially happy when the Lepse is finally in dry dock and its safe dismantlement can begin.”

The Volodarsky was towed out of Murmansk harbor in August 2013 and the tempo of its dismantlement is advancing at a far swifter pace.

According to Valery Pantaleyev, the director of SevRAO, the Northern Federal Enterprise for the Handling of Radioactive Waste where Volgodarsky is in dry dock, “The Volodarsky will be dismantled and all that remains of the vessel – two reactor blocks, will be stored at Sayda Bay.”

Sayda Bay is a former fishing village in Russia’s far Northwest that was annexed by the Russian Navy for storage of low-level radioactive storage. It’s slated to become a regional center for the temporary storage of radioactive waste.

Pantaleyev added that uncontaminated metal stripped from the ship would be sent on for recycling.

The Volodarsky, like the Lepse, served as a nuclear maintenance vessel for nuclear icebreakers from 1996 to 1991.

In that year, the ship was re-classified as a non-self-propelled vessel to be used for temporary storage of radioactive waste and technological equipment with surface radioactive contamination.

In 1998, the Volodarsky underwent conversion: All external hatches were sealed and all combustibles removed from the ship.

Unlike the dismantlement of the Lepse, which is supported by the European Bank of Reconstruction and development and various donations through the former-G8’s Global Partnership initiative, the Volodarsky’s stripping is being paid for by the Russian government