MURMANSK – Russia’s northwest territorial center for handling radioactive waste, RosRAO – formerly known as Radon – is conducting an inventory of its accrued radiological refuse and making arrangements to pack it up and send it to a similar facility near St. Petersburg in preparation for closing its own doors. 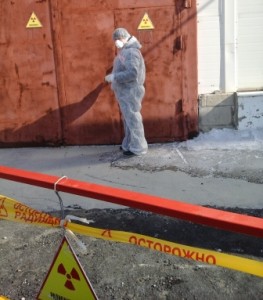 MURMANSK – Russia’s northwest territorial center for handling radioactive waste, RosRAO – formerly known as Radon – is conducting an inventory of its accrued radiological refuse and making arrangements to pack it up and send it to a similar facility near St. Petersburg in preparation for closing its own doors.

The Murmansk Specialized Combine for Radiological Safety, Radon, was founded in 1962 to store solid radioactive waste and sources of ionizing radiation from nuclear facilities in the northerly Murmansk and Arkhangelsk regions of Russia.

In 1994,  an inspection of the Radon facility by the Kola Regional offices of Gosatomnadzor, Russia’s former nuclear oversight body, uncovered that the installation’s technical specifications didn’t met legal specifications and decided to shut it down

Currently, the facility houses four underground cement storage units with a capacity of 200 cubic meters each for storage of solid radioactive waste, and two 200-cubic-meter reservoirs for storing liquid radioactive waste. The storage facility itself is spread over six hectares 33 kilometers from Murmansk, and its population of about 300,000, along the Pechanga highway toward Norway.

The Murmansk facility is carrying out its work under license granting it the right to handle radioactive waste for transport as well as storage in stationary units.

“By decision of the Russian state nuclear corporation [Rosatom] four RosRAO facilities will be shut down: the facilities in Kazan, Samara, Chelyabinsk and Murmansk,” said Alexander Penchikov, the head of the Murmansk facility during a special tour for the press, for which Bellona was in attendance. “In preparation for shutdown, we are conducting an inventory.” Alexander Penchikov announcing that the RosRAO site in Murmansk will be closed down. (Photo: Anna Kireeva/Bellona Murmansk)

He said that because of changes in legislation as well as in the approach to handling nuclear waste, the Murmansk RosRAO’s facility’s designation in 1993 was changed from that of a final storage point for radioactive waste to simply a storage point. However because it ran afoul of technical rules, specifically the absence of a decontamination center and a secure compound, it stopped accepting waste for storage altogether.

So, said Penchikov, the site needs to inventory its accrued waste. But they’ve run into problems.

“We’ve run into a situation where accounting records that were compiled in 1992 and 1993 don’t give us the full picture,” he said. “Therefore we are conducting an additional studies on liftable radioactive waste. This is mostly spent sources of ionizing radiation in the form of defensive blocks that are lying around in heaps.”

he said that since the inventory had begun in 2011, “we have lifted waste, classified it, and laid it out according to category – low or medium level waste, and sorted and divided it into classes.”

Penchikov admitted that, “of course, we don’t always know what we are going to run into, and even now we don’t have answers to many questions.”

As an example, he cited that Murmansk’s Radon facility traditionally received waste from the Lenin nuclear icebreaker. This waste, he said, was usually assumed to be of a higher classification than medium level waste.

“But we put it though the certification process and it turned out to that it was low level waste.” This, he said, made it possible to reach an agreement with Federal Service for Environmental, Technological and Nuclear Oversight – the successor organization to Gosatomnadzor, which was shuttered as a Ministry and reduced to an agency in 2003 – on a project to remove the nuclear waste containers from the Murmansk RosRAO site.

Penchikov told reporters on the tour that further storage of radioactive waste on the Murmansk RosRAO site was not reasonable because the facility is too small. Hence it was decided to transport the waste to a specialized RosRAO facility in the Leningrad Region, where the technology is up to spec.

“This enabled us to unload spent sources from blocks, reassign them the category of industrial waste, at the same time reducing the volumes of radioactive waste by 100 times,” he said.

Penchikov here referred to radioactive waste that has not yet been completely investigated, and about whose reprocessing authorities remain uncertain.

“In summary, we have somewhere around 150 cubic meters of waste,” he said. “We have already, it’s true, on two staged removed 60 to 70 cubic meters of liquid radioactive waste.” and he added that, “in 2013, we emptied all that should have been emptied.”

In 2016, the Murmansk area’s RosRAO site’s operational license will lapse. Extending its license will require a procedure of public hearings that will take place in the town of Kola on May 16.

According to Penchikov, preparing for the facilities shutdown will take until 2016. Before then, a plan for decommissioning the site will have to be drafted and pass the muster of a state environmental impact assessment.

“Our facility is subject to monitoring as a site of possible discovery of flaws or lapses for a duration of 50 years after it is taken out of service,” said Penchikov. “But the results of the last three years of work have shown,  not one of the storage containers evidences visible cracks, shearing, or damage to their solid outer surfaces.” He further added that no radioactivity was spreading at the site.

No further shipments of radioactive waste are expected at the site. The facility will cease to exist as a radiation hazardous site between 2016 and 2020. A scenario is not ruled out that a decision will be made by that time to turn it into a brownfield – something that is currently under discussion.

This report was translated by Charles Digges (charles@bellona.org)