Russia could be moving closer to shutting down its infamous and highly contaminated Mayak Chemical Combine – Russia’s only spent nuclear fuel reprocessing facility – as the government builds a new pilot spent fuel storage and reprocessing facility in the closed city of Zheleznogorsk, near Krasnoyarsk.

Published on November 14, 2013 by Charles Digges 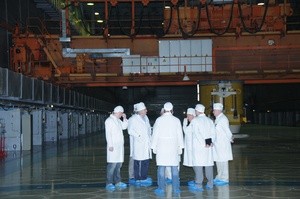 The primary advantage to the new pilot facility at Zheleznogorsk, called RT-2, would be that it would produce no excess nuclear waste when reprocessing spent nuclear fuel – something that would save the Siberian region were the new facility will be stationed from the half century of radiological woes that accrued in the Southern Urals region where Mayak is located.

Any waste produced in the reprocessing phase at RT-2 is planned to be stored in solid form, significantly reducing the contamination risks that have befallen Mayak, a Cold War relic initially conceived as part of the Soviet push to acquire the atomic bomb.

The pilot facilities at Zheleznogorsk – known as Krasnoyarsk-26 during the Soviet era – fall under the purview of an industry division called the National Operator, as established by Russia’s 2011 law “On handling spent nuclear fuel and radioactive waste.

The law further stipulates that all spent nuclear fuel and radioactive waste produced prior to 2011 is the government’s financial responsibility, where beyond 2011, the bills go to individual nuclear power plants.

Alexander Nikitin, Chairman of the Environmental Right’s Center (ERC) Bellona in St. Petersburg, who has visited the Zheleznogorsk site twice this year, said after the AtomEco conference held late last month in Moscow that the facility is designed to hold and reprocess two of Russia’s thorniest types of spent nuclear fuel: that produced by VVER-1000 reactors and the spent fuel that comes from RBMKs. 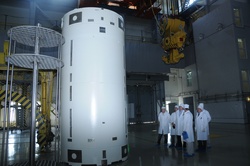 The second represents a special breakthrough: Russia has neither been able to store or reprocess fuel from the Chernobyl-type RBMK – one of the oldest, and most fatally flawed reactor lines in Russia’s civilian line up.

The Zheleznogorsk facility will also be capable of storing spent fuel from VVER-1000 reactors in wet storage. The spent RMBK fuel will be held at RT-2 in dry storage.

Spent VVER-1000 fuel is already arriving at Zheleznogorsk from reactors at the Balakovo, Kalinin, Novovoronezh and Rostov nuclear power plants. RBMK fuel will come from the Leningrad, Kursk, and Smolensk plants.

The reclamation of fuel from Soviet built reactors in former Soviet satellite states, which Russia is obligated to take back and either reprocess or store, is also slowing down, said Nikitin. 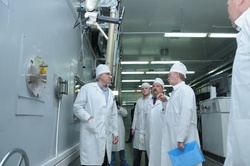 In the case of Hungary, for example, the local government has found it more economical to store the fuel itself than to repatriate it to Russia, easing up somewhat the amount of foreign spent fuel flowing to the country.

But Russia’ state nuclear corporation, Rosatom, has finally – and publically – reached the conclusion that Mayak and its legacy of overwhelming radiological pollution is no longer viable.

Nikitin said that the officials gathered at the Rosatom-sponsored AtomEco conference announced that Mayak could be shut down within 10 years.

Mayak has never been suited to reprocess any spent fuel but that emerging from the VVER-440 line of reactors and reactors aboard nuclear submarines.

Reprocessing those fuels – whose reprocessing regimen produces much more radioactive waste than it does usable nuclear fuel – has turned the southern Urals into a nuclear wasteland, irretrievably contaminating villages and rivers in the hinterlands of the Chelyabinsk Region.

“Rosatom has reached the conclusion that Mayak is bankrupt both in a commercial as well as moral sense,” said Nikitin. “Mayak can’t do it’s job anymore and it is outdated and perpetuated radioactive contamination.”

The RT-2 facility has been under discussion for decades, but it is only recently that pilot facilities have been constructed to investigate the new fuel storage techniques.

The Zheleznogorsk facility was once home to one of Russia’s 13 weapons grade plutonium production reactors. The closed city’s ADE-2 reactor, which started producing plutonium in 1964 under the regime of Nikita Kruschev, was finally relived of its weapons production duties under a joint accord between the United States and Russia in 2010, making it the last of Russia’s weapons reactors to go offline.

As a dual-purpose reactor, it still supplies heat to Zheleznogorsk and surrounding cities.

Nikitin, was told during his visits to RT-2 that the pilot facilities are slated to push through their first batches of reprocessed VVER 1000 and RBMK fuel – while producing no residual radioactive waste – by 2018.

If the test runs prove successful, RT-2 could move on to industrial scale storage and reprocessing.

But Nikitin and Rosatom have their doubts about the rosy predictions of the National Operator. For one, Nikitin is skeptical of the value of reprocessing RMBK fuel.

“This is low enriched fuel, so its unclear what of value could possibly be retrieved from it,” he said. “They’ll spend more reprocessing it than they would recoup in any commercial value.” He added that the planned RMBK spent fuel reprocessing would be undertaken simply “for the sake of the process.”

Rosatom head Sergei Kiriyenko, likewise, told the AtomEco gathering that he is not anxious to rush the process, but rather to take a “wait and see” approach, even as the state nuclear corporation continues to spend big bucks on the pilot project.

Nikitin didn’t rule out complete failure of the endeavor, but said that a more realistic start date for industrial level reprocessing would probably be closer to 2025.

This is the second article in a series on Rosatom’s new approaches to spent nuclear fuel reprocessing and radioactive waste storage.