MURMANSK—Gathered for a meeting in the Russian polar city of Murmansk, experts from ten countries discussed efforts in assuring global nuclear safety in the past two years: international projects in the management of spent nuclear fuel and radioactive waste, work done in decommissioning nuclear submarines and service vessels, and the need for cross-border cooperation in clearing the Arctic seas from radiation hazards.

Published on October 17, 2013 by Anna Kireeva, translated by Maria Kaminskaya 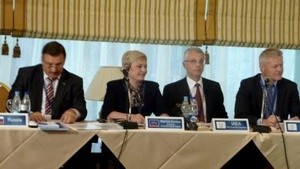 The 27th plenary meeting of the Contact Expert Group (CEG) – an international expert body created in 1996 under the auspices of the International Atomic Energy Agency (IAEA) to help safely and securely manage Russia’s Cold War nuclear legacy – was hosted this year in Murmansk, a far northern Russian city on the Kola Peninsula, home to Russia’s Northern Fleet.

The meeting, which took place on October 9 and 10, was gathered to discuss the results of Russia’s work with nuclear and radioactive waste and included a plenary session and visits to two sites of major significance for the international efforts to safeguard the Northern Fleet’s decommissioned nuclear vessels and stockpiles of spent nuclear fuel and radioactive waste: Sayda Bay and Andreyeva Bay.

Both former naval bases, Sayda Bay and Andreyeva Bay now serve as storage sites for the hulls and reactor compartments of old nuclear submarines, and the Russian Navy’s nuclear and radioactive waste, respectively.

Another nuclear legacy site – a former naval base called Gremikha – has been used to store spent nuclear fuel from naval reactors, and progress at this site was also discussed in Murmansk.

Bellona, which has for many years been working extensively with the issues of nuclear and radiation safety in Russia’s north, had been unsuccessful in securing permission to participate in the meeting, with the organizers routinely citing CEG provisions as reason to decline invitation to non-governmental ecological organizations.

Bellona, however, was given permission to be present in journalist capacity for part of the meeting of October 9 and the press conference given afterwards.

“We value greatly the work of the Contact Expert Group, which is a unique example of international partnership geared toward ensuring global nuclear safety. Including – and this is especially important for us – on the territory of Murmansk Region,” Murmansk Region Governor Marina Kovtun said in her welcome speech to the meeting’s participants.

According to Kovtun, the government of Murmansk Region places enormous significance on ensuring nuclear and radiation safety in the region – and save for the international assistance, these projects would be taking much longer to carry out.

“Today we are looking at nuclear safety projects in Russia’s Northwest, in particular, in Murmansk Region,” said Anatoly Zakharchev, who heads the project office for comprehensive decommissioning of nuclear submarines within the Nuclear and Radiation Safety Directorate of the State Atomic Energy Corporation Rosatom.

“Historically, it has come together so that it was in this region that the harnessing of the energy of the atomic nucleus was actively pursued in the last century. Andreyeva Bay and Sayda Bay are telling results of the progress and our joint efforts in [achieving nuclear safety],” Zakharchev said.

Gremikha – a restricted-access territory on the eastern shore of the Kola Peninsula, 350 kilometers off the entrance to Kola Bay – used to be home to the second largest onshore storage facility for the Northern Fleet’s spent nuclear fuel.

According to Zakharchev, the site is expected to be completely clear of spent nuclear fuel by 2020.

“In Gremikha, we will start dismantling nine more reactor cores and we think that by 2020, we will have completely cleared the base from [spent] nuclear fuel and will then begin creating a ‘brownfield’ [there] and then a ‘greenfield’ after that,” Zakharchev said.

The ‘brownfield’ concept implies cleanup of contaminated territories to a level suitable for reclaiming it for industrial uses, and a ‘greenfield’ site is one that allows the land to be used for agriculture or other non-industrial purposes.

Zakharchev said that the spent fuel from reactors of nuclear submarines laid up in Gremikha is sent to Murmansk for temporary storage at a collection site of Rosatom’s nuclear fleet operator organization, Atomflot. There, it awaits transportation to the Urals, to be reprocessed at the nuclear reprocessing facility Mayak.

Sayda Bay, which became the first site to accommodate reactor compartments of dismantled nuclear-powered submarines when Russia set about decommissioning its aging nuclear fleet, long remained a severe radiation hazard, with an increasing number of cut-out reactor sections collecting at the pontoon piers in the bay, where they were stored afloat.

In 2003, however, German funding and technology came to the site following an intergovernmental agreement that secured Germany’s cooperation in building an onshore storage facility in Sayda Bay.

“We are now creating a large complex for the management of radioactive waste from the entire Russian Northwest,” said Detlef Mietann, who heads the German side of the project in Sayda Bay. “This complex is now being built, we are keeping to schedule. So we are doing quite successful work together with Russia.”

According to Anatoly Grigoriev, head of the International Program Coordination and Implementation Unit within Rosatom’s Nuclear and Radiation Safety Directorate, 2013 saw the start of implementation in Sayda Bay of a program called “Program for decommissioning nuclear service vessels and multi-compartment blocks of reactor compartments of decommissioned nuclear submarines.”

“In 2014, the ‘Regional Complex for the Conditioning and Long-Term Storage of Radioactive Waste’ is to be launched [at the site]. As of today, all nuclear submarines taken out of service by the Navy are either already dismantled or are at the dismantlement stage,” Grigoriev told journalists at the press conference on October 9.

According to Grigoriev, under the decommissioning program for Russian nuclear submarines in the Northwest, SevRAO – or Northern Enterprise for Radioactive Waste Management, Rosatom’s Murmansk-based nuclear and radioactive waste management entity – has handled four three-compartment blocks of nuclear submarines with liquid-metal reactors. Additionally, 54 single-compartment blocks with reactor compartments from dismantled submarines, with the spent fuel and all non-radioactive equipment removed, have been put into long-term storage in Sayda Bay.

And as for the situation in Andreyeva Bay, Zakharchev of Rosatom’s comprehensive decommissioning project office said the spent nuclear fuel removal schedule is being pushed back, but the process may start by 2016.

Built between 1960 and 1964 as a long-term storage facility for spent nuclear fuel and radioactive waste from Russia’s northern nuclear submarine fleet, the site turned into a severe radiation hazard when its infamous Building 5, which housed spent fuel pools, experienced an accident in 1982. Water levels in the pools had fallen dramatically as the result of a leak that was dumping contaminated water into the waters of the bay.

Since 1993, Russian officials have been containing the contamination and preparing the spent fuel in the pools for removal into safe storage.

Though not much progress has been made in decommissioning the Lepse – an old nuclear maintenance ship that used to fuel and defuel icebreaker reactors – the delays were not to be considered a problem, according to Rosatom representatives.

In September 2012, the Lepse – filled to the brim with spent nuclear fuel assemblies and docked for nearly 25 years at a port just four kilometers north of Murmansk, a city with more than a quarter of a million residents – was finally sent off to a naval yard called Nerpa, further out to sea in Murmansk Region, where parts of the ship are now waiting to be scrapped. The hull of the ship, where the radioactive materials are located, is to be stored on land for dismantling.

But the dismantlement project, many years in the making, found itself “stuck” at Nerpa, as the single dismantlement spot happened to have already been spoken for by the first Soviet nuclear submarine, the Leninsky Komsomol.

The Ministry of Defense, which is responsible for the Leninsky Komsomol, has not yet reached a decision on whether to scrub the historic sub or turn it into a museum.

“There’s no need to hurry,” Rosatom’s Zakharchev said. “The [Lepse’s] superstructure is scheduled for cutting off in the winter, and by May, the Lepse will be ready to be taken onshore.”

According to his colleague Grigoriev, the Volodarsky – another ship that used to serve as a nuclear maintenance vessel to service nuclear-propelled icebreakers and later, as a non-self-propelled vessel, for temporary storage of radioactive waste and technological equipment with surface radioactive contamination – is currently awaiting dismantlement.

“The [floating maintenance base] Volodarsky is being decommissioned with funds provided by the Russian Federation. Starting  next year, the active phase will begin of putting together blocks [of the Volodarsky’s cut-up sections] for placement in onshore storage,” Grigoriev said.

Last summer, the Volodarsky was towed out of Murmansk to Sayda Bay, where it will be completely dismantled.

As for the Lotta, another technical maintenance vessel used for collecting and storage of spent nuclear fuel, its dismantlement will begin after the spent fuel on board has been removed from the ship.

“After the [spent nuclear fuel] has been moved into containers, which the British have supplied, it will stay in a storage facility renovated with British funds as well. According to our plans, the dismantlement will begin in late 2014,” Grigoriev said.

Grigoriev also said that dismantlement work had started on the last nuclear submarine in Russia’s Northwest that had been taken out of service by the Northern Fleet – the submarine Krasnodar, which is being dismantled with funds contributed by Italy.