MURMANSK – A so-called “nuclear island” has been carved out in the Russian icebreaker port of Atomflot, which aims to concentrate all potentially dangerous spent nuclear fuel and solid radioactive waste operations in one consolidated area, allowing for greater monitoring and reduced radiation doses to personnel.

Published on July 4, 2013 by Alexey Pavlov, translated by Charles Digges 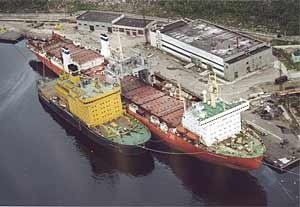 Atomflot Deputy Director Mustafa Kashka told reporters that, “as of now, all work with legacy low and medium level radioactive, which we have stored for decades, is complete.”

He said the contents of more than 650 aged metal containers that were in various stages of disrepair have now be transferred to reinforced concrete containers, which will be shipped to the former naval base of Sayda Bay. Atomflot also how has the capability of dealing with solid and combustible radioactive waste. This year, said Kashka, the construction of a shore based post for unloading spent nuclear fuel from ships will be completed, and will make redundant the work of the highly irradiated Lotta nuclear service vessel.Kashka also added that hopes are high that the spent nuclear fuel houses on the Lotta will be transferred to onshore storage next year.

But Bellona Murmansk Director Andrei Zolotkov was dubious of denoting the new facility with a name more befitting an amusement park or a fairy tale village.

“When I first heard the word combination ‘nuclear island’ and saw it appearing in the media, I doubted that spreading the term widely was necessary,” said Zolotkov. “There is a tendency to think up new creative expressions like ‘nuclear renaissance,’ and ‘nuclear island’ is among these dubious concoctions – Just look at the uses of the adjectives ‘atomic’ and ‘nuclear.’ They’re not exactly same words, you know.”

“And the noun “island” also imparts the notion that the facility will far away,” continued Zolotkov. “Really, however, it will all be at Atomflot, a mere two kilometers from Murmansk and it 300,000-strong population. “I don’t think that ‘nuclear island’ is a successful or especially necessary initiative of Atomflot’s managers.”

“Frequent use of this term […] in the media suggests that its authors think that the word combination “nuclear island” imparts the enterprise itself with a flare of the creativity and romance, and the city of Murmansk with an air of allure,” Zolotkov added. “If things continue like this we will soon have ‘Cape Neutron’ and ‘Proton Wharf.’”

“Nuclear island’s” chief purpose will be housing solid radioactive waste. More dangerous wastes, such as spent nuclear fuel, will only be unloaded from ships there, and sent further to the Mayak Chemical Combine in the Southern Urals for reprocessing.

Solid radioactive waste is a byproduct of Russia’s nuclear icebreaker fleet: these include joints, parts, mechanisms, instrument, materials, and safety cover-alls, that have been radioactively contaminated and are not fit for further use. This is to say, basically everything that is used or produced in the repair and regulation processes for nuclear energy installations as well as aboard nuclear service ships.

“Now the time has come when we can even deal with equipment that doesn’t fall into the low activity category, which is bulky and doesn’t demand complex technological conditioning,” said Atomflot Deputy Chief Engineer Oleg Khalimullin. “This includes work with fuel assemblies, work with the removable steam generator equipment and so on.”

The project also included the installation of a radiation monitoring system financed by Norway.

The reconstruction of Atomflot’s pier number 5 was also completed toward the end of last year, during the process of which a number of other activities were undertaken, including seabed countersinking of beams for wharfs housing nuclear icebreakers and service ship. Underwater crags were blasted free under protective domes and the debris removed. Wharf walls were also reconstructed and fortified, eight meter caissons were positioned at a depth of eight meters, and the entire engineering system for mooring ships was switched out for a new one. Now the pier number 5 can accept nuclear icebreakers and refuel them.

A 100 ton crane at the pier is also being repaired. When finished, it will correspond to contemporary technical norms established for equipment to be used at facilities carrying out potentially hazardous operations with nuclear materials and packaging of radioactive waste.

Each of these systems have double or triple redundancies, which is especially important in crane works that move containers with especially dangerous loads. The crane’s assembly is scheduled for completion by the end of this year.

According to current plans, all equipment necessary for handling radioactive waste and spent nuclear fuel will be functioning by 2015. Atomflot says that then it will be fully capable of accepting containers of spent nuclear fuel from the aged and decommissioned fuel storage facility at Andreyeva Bay and sending it further by rail for storage in the Russian Far East. Such operations will continue over several years and pose a serious test for the “nuclear Island.”