Vis menyen
Bellona.org > Latest News > Nuclear issues > Nuclear Russia > In order to have a dialogue, you have to prepare for it

In order to have a dialogue, you have to prepare for it

ST. PETERSBURG – The eighth international public forum “Atomic Energy, Society, Safety – 2013” wrapped up last week in Moscow, and, if during previous forums Russia’s state nuclear corporation Rosatom had the floor and reported on its successes, and NGOs gathered with grumbles, then at this forum the situation seemed to be changing – and actual problems are being discussed.

Published on April 18, 2013 by Lina Zernova, translated by Charles Digges 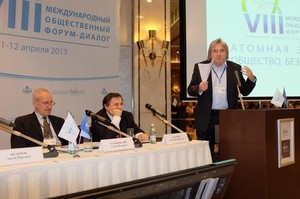 Alexander Nikitin, chairman of the Environmental Rights Center (ERC) Bellona participated in the forum’s “Contemporary Practice and Perspectives for Handling Radioactive Waste in the Russian Federation,” and he here shares some of his impressions, as told to Lina Zernova, editor of ERC Bellona’s Ecopravo magazine:

Roundtable that overflowed the seminar

NIKITIN: During our preparations for the forum, Academic Alexei Yablokov and I decided it was very important to discuss the issue of radioactive waste handling. We are very concerned about the situation in Russia. A number of questions came up regarding the actions of the national operator for handling radioactive waste, which began its operations a few months ago. 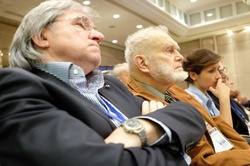 We invited speakers to the roundtable who could discuss this question professionally. We put together the agenda for the round table, identified speakers, worked hard to invite colleagues from NGOs, and arranged the discussion scenario.

The co-chair of the roundtable was Andrei Abramov, director of state policy for radioactive waste, spent nuclear fuel and the decommissioning of nuclear and radioactively dangerous installations. Other leaders also took part. For instance, Dmitry Polyakov, director of the National Operator for Handling Radioactive Waste, Liliya Kuryndina, the head of the section for radio-ecology and inspection of the Department of Government Policy of the Ministry of Natural Resources, and others.

Such a high caliber of speakers gave the roundtable the corresponding tone. At times it seemed that the discussion was overflowing the format of a roundtable and was becoming a scientific seminar. I was pleased with this – I like concrete discussion and action.

How the raw materials for a law feel into the Duma

You can get very important information at forums like this. For instance, in atomic circles it is known that work has been ceased on the [Russian] Law on Spent Nuclear Fuel. The nuclear industry decided to first see how Federal Law 190 “On the Handling of Spent Nuclear Fuel,” which was adopted in mid 2011, was working. And the concepts of both laws have much in common. Aside from that, specialists understand that the Law on Spent Nuclear Fuel cannot be reviewed until questions of technologies for handling and reprocessing spent nuclear fuel. And they don’t exist at present – they are in the development stage.

And, through appearances of the Duma deputies at the forum, I found out that the bill for the Law on Spent Nuclear Fuel had been passed to the Duma’s lower chamber for review.  If the bill is adopted, then changing anything in it will be practically impossible. And this is a super important law because it defines policy for handling extremely dangerous materials. We must quickly find out how the law got passed to the Duma. It was probably a mistake, but a dangerous one…

Injecting liquid radioactive waste into the earth is impermissible

We discussed the question of implementing the above-mentioned Federal Law 190. Arguments focused, as always, on some of its norms, specifically the injection of liquid radioactive waste into underground formations. In a word, expecting arguments around this subject to die down is pointless. To agree that mid-level and low-level waste should be injected into underground formations is impossible.

As Alexander Abramov said, Russia has three points were such injections are allowed. These are the Mining and Chemical Combine in Zheleznogorsk, Dmitrovgrad, and Seversk. As such, our roundtable suggested reviewing the possibility of stopping these injections in the one country in the world were they are officially allow – Russia.

It is also necessary to conduct research on the possibility of liquidating the already created underground reservoirs of liquid radioactive waste. We need to understand the economic, technical and technological sides of the problem.

[Bellona nuclear physicist and general manager] Nils Bøhmer in his report told of an event at Sellafield [in Great Britain]. They built a laboratory there to study the possibility of burying highly active waste. But when they built it, Sellafield announced to the local population that it had decided to turn the laboratory into storage [for radioactive waste]. The public said no. Because they considered they had been fooled. And this place was suitable for storage by all conceptions.

The public must be spoken to truthfully. I mean in places like Krasnoyarsk and Sosnovy Bor where Rosatom is planning on building repositories for radioactive waste. In Krasnoyarsk they announced they would build a laboratory, but in the environmental impact study they are talking about a repository for spent nuclear fuel. I can’t understand with what goals they want to build a repository for spent nuclear fuel near St. Petersburg. You must tell people the truth. Especially if we want to avoid the Sellafield effect.

It is worth the cost

And finally. From the very beginning, me and my colleagues asked the question ‘do we need a forum dialogue?’ Huge resources and time are needed. Is it worth the cost?

Now, it is impossible not to confess that we are undertaking necessary business. With time, forums will more and more come to resemble an exchange of opinion. As I see it, after each forum dialogue, both sides understand one another better, positions on the vision of  a host of problems becomes closer. This is a real result of eight years of work.

Now we must deal with the question of continuity: At each successive forum, we must analyze how suggestions that were brought up at the last forum have been fulfilled. Then the effectiveness of our meetings will noticeably grow.