MOSCOW – The two most dangerous nuclear and radiation hazard elimination projects in Northwest Russia – the dismantlement of the Lepse nuclear waste storage ship, and remediation of the former nuclear submarine spent fuel depository Andreyeva Bay – have stalled on the shoals of financial, logistical and safety concerns. 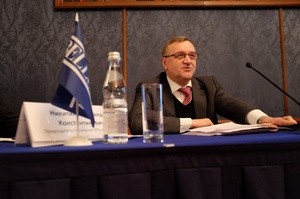 The conference convened some 80 participants from Russia’s nuclear industry, industry and regulatory representatives from Norway, Sweden and the UK, as well as several companies and the European Bank of Reconstruction and Development (EBRD), which is heavily underwriting nuclear remediation projects in Northwest Russia.

“This is not the first seminar between Bellona and Rosatom,” Anatoly Grigoriev, head of Rosatom’s International Program Coordination and Implementation Unit, told the conference. “Bellona is a trustworthy organization to cooperate with in eliminating threatening gossip on nuclear issues. Its voice is trusted among the Russian public and international specialists.”

Grigoriev told the conference that Andreyeva Bay, located 40 kilometers from the Norwegian border, is one of the thorniest nuclear installations to rehabilitate. Built between 1960 and 1964 as a long term storage facility for spent nuclear fuel and radioactive waste produced by Russia’s northern nuclear submarine fleet, the facility’s infamous building 5 experience and accident in 1982. It was discovered that water levels in the buildings cooling pools for spent nuclear fuel had fallen dramatically as the result of a leak that was dumping contaminated water into the waters of the bay.

Russian officials did not acknowledge the leak until 1993 after Bellona brought it to light.

Work to bring the contamination to heel has proceeded, but Grigoriev warned that infrastructure for dealing with spent nuclear fuel and radioactive waste.

“When the Minatom [the precursor to Rosatom] took responsibility for the [Andreyeva Bay] from the militar in 2000, there was no infrastructure for spent nuclear fuel and nuclear waste management or site rehabilitation”, Grigoriev said.

He added that preparation for the work of transporting spent nuclear fuel from the site to be the most dangerous undertaking facing the cleanup project.

“We have considered various transportation methods in terms of time and safety. We  have decided to unload the spent nuclear fuel sequentially from the 1a storage unit, then from 2b, and then the 3a,” he said, referring to various fuel storage buildings at Andreyeva Bay.

Still, Rosatom has made significant inroads into securing Andreyeva Bay. Specialists have constructed shielding to isolte the spent nuclear fuel and have designed a shelter over the nuclear waste storage unit that covers 10,000 tons, or 48 containers, of solid radioactive waste.

“This work has helped us to avoid nuclear evaporations and the release of nuclear waters, which has significantly improved the environmental situation,” said Grigoriev.

Yet difficulties remain. The main hurdle at this point is the construction of a nuclear waste management complex. This complex was slated for completion in 2015, but considerations for its safe construction have pushed that back to the first quarter of 2016.

Safe construction implies that the Andreyeva Bay site is being fitted with a host of new equipment, which needs to be put to tender, and then produced and installed.

Another lingering issue is providing an energy supply for the ramping up of the remediation work. Rosatom’s plans are to install two additional transformer substations and three diesel generators to that end.

In September of last year, the Lepse nuclear service ship – one of the most significant radiation hazards in Northwest Russia – was finally towed after two decades of pressure from Russian experts and Bellona from the nuclear icebreaker port of Atomflot, located 4 kilometers from the center of Murmansk and its 300,000 inhabitants, to the Nerpa naval shipyard further north on Kola Bay for full dismantlement. 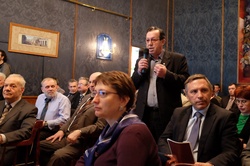 The Lepse’s keel was laid in 1934, and it spent most of its long career after World War II mothballed on a Ukrainian river. But its durable hull pulled it out of obscurity in 1961, when it was retrofitted to handle at-sea refueling of Russia’s first nuclear ice breaker, the Lenin, which is now a museum.

When the Lepse was retired in 1988, it had 639 spent fuel assemblies aboard, some 300 of which are damaged.

The Lepse arrived at Nerpa safely, but ran into a traffic jam. As it turned out, the dry dock on which the highly contaminated vessel was to be disassembled was occupied by the Leninsky Komsomol, Russia historic first nuclear submarine. A conflict ensued over whether to dismantle the Leninsky Komsomol to make way for the Lepse or preserve the sub as a museum piece. Neither, it was reported, was the Nerpa’s infrastructure prepared to immediately take on the task of the challenging dismantlement process.

At the Moscow conference, it was announced that the Lepse would not be moved onto the land-based dry dock at Nerpa until December of this year, while discussions about turning the Leninsky Komsomol into a museum or push pins could continue indefinitely.

According to Ken Mizen from “Nuvia Limited”, the Lepse is now moored at a temporary dock awaiting the dismantlement works. The infrastructure for the management of the spent nuclear fuel from the Lepse’s holds will be built at Nerpa by November this year.

“We have also worked out a technical task for spent nuclear fuel reprocessing,” Mizen told the seminar. “The document is being considered on Russian Federal levels.”

That the ship was not immediately taken in for dismantlement was a disappointment to Bellona as well as financial stakeholders in the project.

“Watching the last voyage of the ship to Nerpa more then half a year ago, representatives of Bellona, Rosatom, and the EBRD were sure she would go directly to the dry dock,” said Nils Bøhmer, Bellona’s general manager and nuclear physicist, who was present for the Moscow conference. “Now we have found that the ship is stuck at the shipyard for an indefinite period of time because of a lack of financial coordination. It is very important for all stakeholders to agree on the financial plan as soon as possible.” 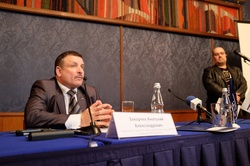 Anatoly Zakharchev, head of what Rosatom officially refers to in English translation as its Office for Nuclear Submarines Complex Utilization – a department thatis responsible for decommissioning nuclear submarines – said part of the difficulty of getting the Lepse into dry dock is because the Leninsky Komsomol belongs to the Russian Navy.

“The main problem is that the submarine belongs to the Northern Fleet, so [the fleet] is  responsible for what to do with it,” Zakharchev told the conference. “We have contacted the Ministry of Defense to discuss the problem, but haven’t achieved any progress yet.”

Bellona’s Alexander Nikitin agreed that any progress on moving the sub would have to come from the Defence Ministry.

But the Defense ministry is not the only impediment. Nerpa needs 50 million rubles (€12.5 million) to handle the submarine, but financing for this next level of the project seems to be wanting.

The first tranche of financing guarantees only the construction of infrastructure at Nerpa to deal with cutting the Lepse to pieces and to manage the spent nuclear fuel.

Oleg Yerin who is responsible for the Lepse project at Nerpa told the conference a second phase of financing is necessary for packing and transporting the spent nuclear fuel to safe storage.

“The second part of the project consists of unloading spent nuclear fuel, packing it in special containers, and transportating it to a long term storage facility at Saida Bay,” he said. “Financial support for this work is not yet confirmed. We don’t want the Lepse to become another [Leninsky Komsomolets] with an indefinite future and no money.”

Bellona’s Bøhmer was disappointed that internal coordination between Russian government agencies and ministries responsible for the Lepse seems for the time being to have fallen flat.

“It’s a pity that these big projects are postponed. We understand the importance of making good technical solutions to do the work safely,” he said. “But besides these difficulties, the projects face internal Russian problems, such coordination between Ministers and departments. It is important to solve these issues in a fast and effective manner.”

Bøhmer nonetheless underscored the progress made in the sphere of radiation safety in the Murmansk region when compared to where things stood 10 to 15 years ago.

“There has been a great deal of progress, though it was not as fast as we would have expected,” he said.

Anna Kireeva reported from Moscow and Charles Digges from Oslo.