Russia’s state nuclear corporation Rosatom has announced a tender for the construction of a $166 million fuel reprocessing demonstration plant in the closed Siberian city of Zheleznogorsk near Kransnoyarsk, Rosatom officials have confirmed.

Published on February 21, 2013 by Charles Digges 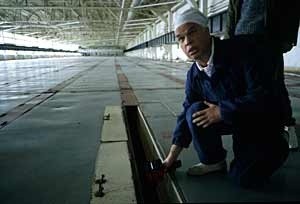 The so-called pilot demonstration center is slated for construction on the site of the Zheleznogorsk Mining and Chemical Combine (MCC), a facility once used to producing plutonium for nuclear weapons.

In recent years, it has become the destination for storing spent nuclear fuel from Russia’s VVER-1000 reactor fleet.

Under the terms of the tender, the facility must be in operation by 10 December 2015 and cost $166 million. The deadline for offers is March 18 and the result will be announced on March 22, World Nuclear News reported.

The pilot reprocessing center would initially be used to develop and test new technologies for reprocessing spent nuclear fuel from VVER-1000 reactors. The pilot plant is expected to later develop technology for the reprocessing of used fuel from fast neutron reactors, said WWN.

The pilot center would also provide data for the construction of a large-scale reprocessing plant, presumably relieving some of the burden Rosatom puts on the Mayak Chemical Combine, Russia’s single, beleaguered and highly contaminated spent nuclear fuel reprocessing facility.

The industrial scale reprocessing plant would also be located at the MCC, and could, according to WWN, be operational by 2025 to 2030.

A new reprocessing facility centers around Rosatom’s plans to run its nuclear fleet on fast neutron, or “breeder,” reactors. Every nation that has experimented with their technology has abandoned them for safety and economic reasons.

But their proliferation is integral to Rosatom’s plans of pushing nuclear power as its primary energy source, accounting for the vast majority of the country’s energy needs by the end of this century.

“The new demonstration plant in essential for Russia’s desire to pursue fast neutron reactors,” said Nils Bøhmer, Bellona’s general manager and nuclear physicist. “There have been numerous unsuccessful attempts to develop this technology, and if Russia fails, it will have to examine plan B – creating a deep geologic repository for its spent nuclear fuel.”

Yet the Russian nuclear industry has been pursuing the holy grail of mixed oxide (MOX) and plutonium fueled reactors on the drawing board for decades.

But Bøhmer argues that whether the Russians succeed where all others have failed, they still need a repository for their accrued 22,000 tons of spent nuclear fuel.

“This is something they should be thinking about now, and not waiting until 2030 to see if their new reprocessing plant pans out,” said Bøhmer. “If they delay plans for a repository now, they will be 17 years behind on their thinking by 2030.

Should the plan succeed, spent VVER-1000 fuel from reactors at the Balakovo, Kalinin, Novovoronezh and Rostov plants would be stored at a new centralized ‘dry’ interim storage facility, which is already under construction at Zheleznogorsk.

Such fuel has already been sent to Zheleznogorsk for storage in water pools.

Yet Russia’s history with the use of fast neutron reactors is not stellar.

In December of last year, the power output of the fast neutron reactor at Beloyarsk, the BN-600, was reduced to 76 percent capacity for three months to due to “findings regarding the functioning of the equipment,” as reported on the website of Rosenergoatom, which runs Russia’s nuclear reactors.

Rosenergoatom did not elaborate on what the “findings regarding the functioning of the equipment,” at the BN-600.

The BN-600 was taken online on April 8, 1980. It is the only large commercial fast neutron reactor in the world.

The United States, France, Great Britain, and Japan have experience operating commercial reactors of similar designs, but they abandoned fast neutron projects due to the high risk of accidents, unstable performance, and a dismal economic record.

The BN-600 reactor has had its own share of incidents, including those involving sodium coolant leaks and sodium fires. The reactor’s engineered useful life term ended in 2010. However, though absent of a state ecological review, a licensing extension was granted until 2020.

Another fast neutron reactor, the BN-800, is also under construction at the Beloyarsk NPP.

The country’s federal target program envisages nuclear providing 45-50 percent at that time, with the share rising to 70-80 percent by the end of the century.