Two years after the € 70 million Italian-built spent nuclear fuel transport ship Rossita was launched as part of Italy’s international efforts to aid Russian nuclear remediation, the vessel has languished with absolutely no work commissions, and is currently in dry-dock for scheduled repairs.

Published on February 14, 2013 by Charles Digges 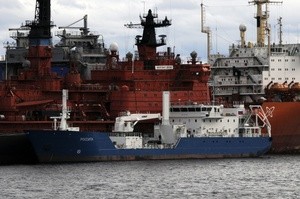 The ship, which was built and given to Russia as part of Italy’s commitment to the G-8 Global Partnership program, under which the G-8 nations sought to donate $20 billion in funding toward Russian nuclear remediation projects over 10 years beginning in 2002.

Launched in Italy in 2010, the vessels Rossita transferred to Rosatomflot in 2011with the aim of transporting containers of spent nuclear fuel from submarines from storage sites in Northwest Russia, namely Andreyeva Bay and Severodvinsk.

When Atomflot took possession of the vessel in August2011, Rosatomflot director Vyacheslav Ruksha said the ship would begin removing container of spent fuel during the last quarter of 2012, according to the Barents Observer news portal, citing nuclear.ru.

Rosatomflot is responsible for operating Russia’s nuclear icebreaker fleet as well as their technical base Atomflot. Atomflot itself is used to re-load the parcels of spent nuclear fuel and radioactive waste it receives, and send it on for further storage.

Yesterday it was reported that not only has the Rossita been involved in no efforts to transport spent nuclear fuel containers, but that it was also in dry-dock at the Nerpa shipyard north of Murmansk for repairs to its drive system and crane to optimize them for use in Arctic conditions, said the Barents Observer, citing Nord-News.

Andrei Zolotkov, director of Bellona Murmansk said the repairs the ship is undergoing are normal, and must be performed every year or two, so nothing was out of the ordinary.

According to Nils Bøhmer, Bellona’s general manager and nuclear physicist, the fact the ship has not been used is not a matter of negligence but rather a matter of ill timing.

“Its arrival sort of fell outside the framework of the master plan for cleaning up spent nuclear fuel in Northwest Russia,” he said in reference to the cleanup plan developed by Moscow and European donors.

“The Russians were hardly going to turn down a free ship,” said Bøhmer. “But the Rossita, as a boat designed to carry only prepackaged spent nuclear fuel, is not the ship needed for a little while yet.”

Andreyeva bay is currently home to some 21,000 spent nuclear fuel assemblies housed in dilapidated and ageing storage tanks. The facility is located 60 kilometers from the Norwegian border and has long been an environmental concern for Oslo.

“The ship is needed to transport packaged waste from Andreyeva Bay to Murmansk for intermediate storage built by the UK by rail directly to Mayak,” Russia’s nuclear reprocessing site in the Southern Urals, said Bøhmer. “It’s arrival just fell outside the overall development of the master plan.”

“It’s a pity that preparation works for transportation of spent nuclear fuel and radioactive waste from Andreeva Bay took longer time than the construction itself of Rossita, he said. “The Rossita was constructed for these purposes. Now the ship is just awaiting for the cargo to transport,” he told the Barents Observer.

The one ship currently transporting contaminated waste from Nerpa and the former Russian naval base Gremikha to Murmansk is the aged Imandra nuclear service vessel.

But the Imandra, pointed out Zolotkov, is built for transporting spent nuclear fuel assemblies, unlike the Rossita, which is not designed to bear such loads.