MURMANSK – Environmentalists and the population of Murmansk alike three month ago cheered when the Lepse, nuclear service ship and its decades old radioactive cargo were hauled out of the city’s harbor for final dismantlement further north.

The cheers have been muted, however, as it turns out virtually nothing has been done since it was hauled and essentially left bobbing at dockside at Nerpa, a naval shipyard further north on Murmansk harbor – presenting the same radiological risks it posed to Murmansk for more than 20 years.

The reason? One of Russia’s now-famous traffic-jams – with a bit of a twist.

Nerpa’s SR3 dry dock, on which the Lepse was to be housed for dismantlement, is currently occupied by the Leninsky Komsomol, call sign K-3, project No. 627 – otherwise known as the Soviet Union’s first nuclear submarine, and the third to be built in the world. 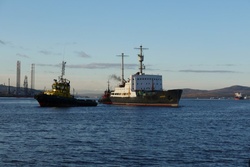 And it doesn’t look like the submarine is going anywhere anytime soon.

Decommissioned in 1991, the Leninsky Komsomol put to sea in 1962. In 1967 the sub suffered a fire in its hydraulic system while traversing the Norwegian Sea, and the automatic carbon dioxide fire suppression system killed 39 crewmembers. It was suggested in the year of its decommissioning that it be turned into a museum.

The spent fuel aboard the Leninsky Komsomol has been taken off the vessel and disposed of. It has since been housed at Nerpa’s dry dock No. SR3 awaiting a final decision as to its final disposition.

“Decisions like this get emotional and ridiculous,” said Alexander Nikitin, chairman of the Environment and Rights Center (ERC) Bellona, and a former submarine captain. “Somebody suggests turning the sub into a museum, everyone nods solemnly, and no one knows where the money is going to come from – meanwhile the Lepse is financed and ready to be dismantled. It’s absurd.”

In September, the towing away of the Lepse represented the culmination of a monumental environmental achievement for which Bellona and its Russian and European partners have fought for 20 years.

Finally gone from the Atomflot icebreaker port some 4 kilometers north of the center of Murmansk were 639 spent nuclear fuel assemblies stored in casks and caissons in the Lepse’s irradiated holds.

Its dismantlement at the Nerpa shipyard, though bound to be complicated, would be done on dry land, where the Lepse would no longer present a contamination or collision dangers with other vessels in busy Murmansk Harbor.

But the potential contamination problem has only changed geography.

“Putting the Lepse in dry dock would lessen its nuclear and radioactive dangers by 90 percent,” Vyacheslav Ruksha, general director of Atomflot , from where the Lepse was towed, told Bellona.

Dismantling the Lepse has been on the agenda since the early 1980s, but at that time the technology to remove the fuel assemblies it stores in its holds – many of them bent, damaged or whose casings have cracked – didn’t exist.  Developing this technology, specialized equipment, and raising the financing, took the next two decades.

The K-3: Make it a museum or smash it into push-pins?

The fate of the submarine will be the subject of long discussion over whether it should be sawed-up or turned into a museum of Soviet naval might.

“Just imagine how long a discussion of the fate of the Leninsky Komsomol could go on,” said Andrei Zolotkov, director of Bellona Murmansk. “It took more than four years from the moment they said it should be a museum for specialists from the St. Petersburg maritime bureau of marine engineering Malakhit to even come up with a blueprint to retrofit the vessel.”

Zolotkov said the first initiatives to preserve the Leninsky Komsomol were initially tabled in the early 90s, and that in 2003, a decision from Moscow was still pending. Since 2005, the Leninsky Komsomol has been at Nerpa, and the shipyard’s technicians have been undertaking every effort toward its preservation on the assumption it will be a future museum piece.

According to figures from Nerpa, retrofitting the sub and laying it up permanently for display is estimated at 500 million roubles. ($16.2 million).

“Its worth remembering the epic of retrofitting the first atomic icebreaker, the Lenin, so that it could be a museum took no less than 20 years, and hardly came off without a hitch,” said Zolotkov. “And let’s not forget that the Lenin, at the beginning of this road, was in very good shape.”

The Lepse vs the Leninsky Komsomol

Zolotkov is sure that with the arrival of the Lepse, the situation surrounding the SR3 dry dock at Nerpa is bound to get tense:  The Leninsky Komsomol is holding up the completion of an internationally funded project – one that is transnationally financed, and one whose potentially dangerous dismantlement work could be delayed well past the deadlines set by Atomflot and Russia’s state nuclear corporation Rosatom.

Bellona’s Zolotkov sees dangers creeping over the horizon, ones that get deadlocked by the usual Russian process of mutual recriminations and endless committee meetings.

“I would not want to have to watch how the Nerpa SR3 dock wants to apply its practical monopoly position in the sphere of dismantling submarines and future nuclear vessels, and tries to dictate its conditions in this rather ambiguous situation,” said Zolotkov. “This conflict will not be resolved to either the advantage of the Lepse or the [Leninsky Komsomol].”

Zolotkov said the 500 million roubles needed to turn the sub into a museum “was not going to come out of the pocket of Dmitry Rogozin,” the Russian Deputy Prime Minister who oversees military expenditures.

Pressure from the outside

“Even if that does happen […] then the probability of losing financial guarantees for the Lepse will be sums that are considerably larger,” said Zolotkov. “In 2013, there is only one way out – take the K-3 [off the dry dock] and put the Lepse on it.”

Nils Bøhmer, Bellona’s general manager and nuclear physicist, said that the European Bank of Reconstruction and Development (EBRD), which pieced together the funding for the Lepse’s dismantlement over the course of many years, should apply pressure to the Russian authorities.

“The EBRD should push Russia to get the sub off the dry dock and get to work on the Lepse as soon as possible,” he said, adding that, as the Leninsky Komsomol’s spent nuclear fuel has already been removed, this should be a relatively easy process.

“It is crucial for work on the Lepse to commence so that it doesn’t sink,” said Bøhmer.