The Lepse nuclear waste ship, which has for more that two decades hovered in its Murmansk port, bursting at the seams with years’ worth of accrued spent nuclear fuel in its holds, posing one of the greatest dangers of radioactive contamination in the Russia Arctic, will finally be towed for scrapping on Friday, September 14.

Published on September 12, 2012 by Charles Digges 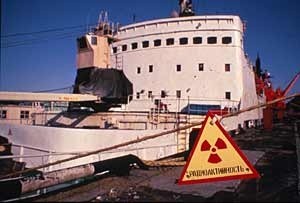 The ship will be moved from Atomflot, Russia’s nuclear icebreaker port to a shipyard further north where it will be broken up on land and its waste sent for storage in a victory for nuclear safety in Russia that Bellona cheers.

“The Lepse has for decades posed a serious danger to people and the environment in Northwest Russia,” said Bellona President Frederic Hauge. “This is an important first step toward properly handling the radioactive ship.”

The Lepse, which in its heyday had been used as a support vessel for Russia’s nuclear icebreaker fleet, has been bobbing at dockside at the Atomflot port four kilometers north of Murmansk’s more than a quarter of a million-strong population since 1988.

In the holds of the Lepse are filled with casks and caissons holding 639 spent nuclear fuel assemblies –equaling hundreds of tons of radioactive materials – a significant portion of which have been damaged, including assemblies that were damaged during offloading from the nuclear icebreaker Lenin.

The keel for the Lepse, a dry goods ship, was initially laid in 1934 and construction on it continued until World War II. It was eventually dumped in a river in the Ukraine. Its reactivation came about when the icebreaker Lenin was under construction and the Lepse’s durable hull saved it from mothballs. 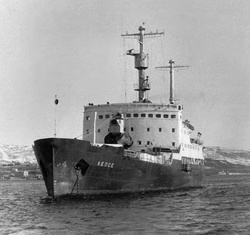 In 1961, it was specially retrofitted to refuel the Lenin and the growing icebreaker fleet at sea, pulling spend nuclear fuel off, and refilling icebreakers’ reactors.

Between 1963 and 1981, the Lepse re-loaded nuclear fuel on the nuclear powered icebreakers Lenin, Arktika and Sibir 14 times. In 1981, it was again retrofitted to become a storage ship for irradiated parts and waste as well as spent nuclear fuel assemblies.

The Lepse also participated in dumping radioactive waste in the Kara and Barents Seas, which has left a Cold War legacy of nuclear and radiological hazards strewn across the sea floor, the extent of which is only beginning to be understood.

Docking the boat at Atomflot, said Hauge “has always been an unacceptable solution given the ship’s continuous emissions of radiation, and constitutes an accident hazard that is a threat to a city of some 305,000 inhabitants.”

The Lepse will now be sent to the Nerpa Shipyard – a naval yard – further out to sea in the Murmansk Region, where parts of the ship will be scrapped. The hull of the ship, where the radioactive materials are located, will be stored on land for dismantling.

According to Andrei Zolotkov, director of Bellona Murmansk, the Lepse will be cut into pieces. The vessel will be put into a dry-dock berth, where its bow and stern will be sawed off. The stern is expected to hold a large portion of radioactive waste. The bow, said Zolotkov, is anticipated to hold little or none, while the ship’s midsection contains spent nuclear fuel.

Then, said Zolotkov, a shelter will be built over the remaining parts of the vessel. A crane and ventilation will be assembled inside and it will be stocked will all necessary equipment to handle the radioactive waste.

Bellona’s Alexander Nikitin, chairman of the Environment and Right Center (ERC) Bellona said the technology that will be used will be dictated by the condition of the spent nuclear fuel rods themselves.

Spent fuel rods that can safely be extracted will be removed from the ship and sent to the Mayak Chemical Combine in the southern Urals, said Nikitin.

Others that are broken, such as those aboard the Lepse from the icebreaker Lenin, will involve removal technologies that will more or less have to be specifically invented for the purpose, he said.

“It will be a standard trial and error process,” said Nikitin.

If even those fuel elements cannot be extracted, they could, by special agreement, be sent for storage at Sayda Bay, which traditionally stores irradiated naval reactor compartments.

“Removing the Lepse from Murmansk – where it posed a radiological threat to the whole city – is certainly a dramatic move in its dismantlement, but the real drama in the Lepse story is yet to come,” he said.

“What is happening now is a just a first step, but it is far better that the ship will now be stored on land,” said Hauge.

“When it is located on the heavily trafficked Kola Bay, there is a significant risk of accidental collisions with other vessels.”

Watch documentary produced by Bellona telling the story of Lepse and dangers associated with this ship.

Bellona’s 20 year battle to rid Murmansk of the Lepse
Along with Russian environmental foundations and nuclear experts, Hauge has followed the developments with the Lepse since 1990.

“I remember the first time I was aboard the Lepse in 1992, when we sailed up to Murmansk on our then environmental vessel Genius. It was a very special experience be on board a nuclear storage vessel where our Geiger counters ran riot,” said Hauge.

Bellona was to become the driving force behind a clean up project for the Lepse, which began in earnest in 1995. Bellona’s bridge between the European Commission in Brussels and nuclear safety authorities in Russia was groundbreaking.

“Handling the Lepse was pioneering political work,” said Hauge. “This was some of the first money that was sent directly between Brussels and Russia after the fall of the Berlin Wall, and we are proud to have contributed.”

International funding begins to pour in

It was a watershed moment that was decisive in focusing the enormous international attention that the Lespe project would grow to obtain. 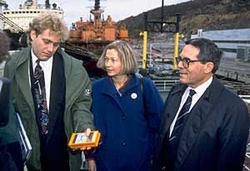 “In October 1994, we invited EU Environment Commissioner [Yannis] Paleokrassas and several Norwegian and European politicians to a Bellona seminar in Murmansk,” said Hauge.

“We rented a nuclear icebreaker and had our seminar on the nuclear threat in northwestern Russia onboard. I don’t think it has happened that an environmental organization has rented a nuclear icebreaker before or since,” he continued. “The seminar is one of the most spectacular events in Bellona’s history, and was the starting point of drawing a lot of international attention to the issue.”

The working heroes of the Lepse

Bellona was also instrumental in putting into place a proper container village for those who worked aboard the Lepse to maintain it.

Before the Lepse Village, eight crew members lived full time aboard the Lespe, exposed to radiation levels that are higher than those allowed by Russian norms. Some 30 more workers were also being continually exposed to these levels emanating from the ship’s radioactive cargo.

Hauge today describe these workers as the true heroes of the Lepse project. .

“ It was a very special experience to hand over the key to the eight containers that the crew of the Lepse could move into,  and see these working people leave their radioactive staterooms aboard the Lepse and get to homes on the land,” said Frederic Hauge nearly 18 years later.

Results of many years of work

Environmental organizations from across Europe have since rallies around the demand that the ship be scrapped and the radioactive material properly stored.

Governments in many countries have also pressed the Russian authorities to get them to take care of the ship.

Through the European Bank of Reconstruction and Development (EBRD), the EU is heavily engaged, and Bellona has worked systematically and actively for the EU to contribute a lions share of the costs of dismantling the vessel.

Nevertheless, it has taken a very long time to take this nuclear threat in hand. It was only in 2003 – almost ten years after the Lepse project was initiated – that scrapping agreements and financing program were signed.

It was then that western donors pledged to provide 13 million euro to empty the Lepse’s holds of their cargo of spent nuclear fuel. According to official Russian estimates, the entire dismantlement project will weigh in at more than $30 million.

Since then, the project has been hampered by disagreements between various parties involved, but many of these obstacles overcome, the Lepse is now on the way to being cut up and its radioactive contents safely stored.