MURMANSK – Residents of the closed Russian nuclear city of Zheleznogorsk have approved at a public environmental hearing Monday a project to construct an underground research laboratory, which will study the possibility of constructing a long term subterranean radioactive waste repository.

Published on August 2, 2012 by Anna Kireeva, translated by Charles Digges 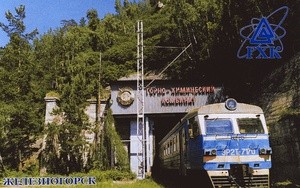 But some environmentalists have raise concerns that access to information about the facility, which was only viewable in paper form at the Zheleznogorsk city administration, was intentionally restricted by Russia’s state nuclear corporation, Rosatom, to avoid criticism of the project.

Still others are unconvinced by the safety of the proposed repository, saying that safety assurances are hyped propaganda from Russia’s nuclear industry.

The laboratory, near the Siberia city of Krasnoyarsk will be built in the area’s Yeniseisky District and will conduct a minimum of nine years of study of mountainous and geological layers in accord with international recommendations and on the basis of experience from other similar international laboratories attempting to perfect the fragile science of safely storing radioactive waste for dozens if not hundreds of thousands of years underground.

The aim of the years of study, which will be conducted at the exact underground depth of the future repository, is to confirm the fitness of the local geology for safe storage of long-lived high- and medium-level radioactive waste, and the development of technology to handle waste.  This will encompass the development of building chambers and shafts for radioactive waste storage, as well as the creation of engineering barriers against radiation. Comprehensive studies of the isolating characteristics of engineering barriers will be carried out, as well as studies on the thermodynamics of the chambers and shafts and geological layers.

The studies will form the backbone of a technical report that will be submitted for expert analysis by the State Commission on Useful Mineral Supplies, which will form the basis for whether the project can enter its first phase of construction of permanently isolating facilities, or if further study is required.

The organizational and technical decisions adopted for the laboratory’s planned activities will not result in a deterioration of the radiation and sanitary conditions in the area of the site’s operations provided that rules and standards are observed as set by the bodies of technological and sanitary and epidemiological oversight and that radiation conditions are properly monitored, Nuclear.ru reported.

No decision on whether the repository can be put to use can be taken until the underground laboratory has reasonably proved that the repository will be safe.

Other countries operating such laboratories for their own repositories include Belgium, Canada, Finland, France, Germany, Japan, Sweden, Switzerland and the US.

According to the Zheleznogorsk Mining and Chemical Combine, a mere 50 people from the 100,000 strong region participated in reviewing the environmental impact report before the hearing, including a number of official inquiries from authorities.

Information about the hearing was posted, as required by law, 30 days before it took place in official media. The State Environmental Impact Study was accessible for review, and preparations of remarks and suggestions of interested parties were addressed in the public reception of the Zheleznogorsk city administration, which was staffed by consultants who answered questions from citizens on the voluminous technical text and who noted their opinions on the planned facility.

Environmental groups from Krasnoyarsk and Zheleznogorsk, representatives of the Ministry of Natural Resources and Ecology, scientists and specialists in various fields were invited to attend Monday’s hearing.

But there were complaints that access to the impact study was extremely limited.

“It was only possible to view the environmental impact study material by traveling personally to Zheleznogorsk,” said Valery Komissarov, chief engineer of the isotope and chemical factory of the Zheleznogorsk Mining and Chemical Combine.

“Paper and electronic copies were forbidden, three copies of the document were available in the public reception of the city administration, where you could copy some information by hand,” he said.

Because of Zheleznogorsk’s militarily closed status, special passes are required to visit, and without being able to visit, many interested citizens were unable to view the Environmental Impact Study.

According to Vladimir Mikheyev, director of the Citizens’ Center For Nuclear Nonproliferation, the closed nature of the impact study shows that Russia’s state nuclear corporation Rosatom is hardly ready to cooperate with the public, specifically with critical observations by ecological groups.

“They only invited organizations that confirm the position of the corporation to their event,” Mikheyev told the Russian Press Line news agency.

Alexander Porosov, main activities director for the state-owned National Radioactive Waste Management Operator said that materials presented at a public hearing should help public hearing participants “understand and be assured of the necessity of the decision to permanently isolate accrued radioactive waste stored at the moment in open air facilities.”

The hearing also provided information on all possible radiation defense barriers under consideration in the project.

Yet the hearing took place in the middle of a workday – something the press service of the Zheleznogorsk Mining and Chemical Combine said was not intended to drive away participants.

“Traditionally, our public hearings take place on Monday or Tuesday and turnout is always normal,” a spokesman for the combine told Bellona.

Two hundred seventy six people took part in the public hearing on the “Environmental Impact Study for the Construction of High-Priority Facilities of Permanent Isolation of Radioactive Waste, Including Planning and Surveying (Krasnoyarsk Region, Nizhne-Kansk Range).” The project was supported by 179 people, with 12 voting against it and 13 abstaining.

But local environmentalists were concerned over whether the hearing had had any effect.  Artem Kardanets, leader of the local “Krasnoyarsk is Against” movement, small towns formed  by the mining and chemical combine are dependent on its enterprises.

“There is across-the-board opinion that standing up against the project to entomb radioactive waste means standing up against prospective jobs. I don’t think we should undertake this project in the Krasnoyarsk region – the area has already been turned into a world class industrial dump,” said Kardants.

“For some reason, the Russian government has considers that Krasnoyarsk also needs radioactive waste,” he said.

The mining and chemical combine itself already houses wet storage for spent nuclear fuel, and has also launched a dry storage facility, which this year received its first load of spent RBMK reactor fuel.

Those who were unable to attend Tuesday’s hearing still have the possibility of including their remarks and suggestions on project documentation for the next 30 days. After this period, all remarks and suggestions will be included in a report that will be an indispensible component of the environmental impact study, which will, in its turn, be reviewed by the State Ecological Expertise on which conclusions on the environmental safety of the project will be based.

According to the National Radioactive Waste Management Operator’s Porosov,  safety of the permanent isolation of radioactive waste is exhaustively guaranteed during normal operation of the facility by the engineered safety barriers that prevent radionuclides and chemical contamination from entering the environment.

Porosov noted that in the emergency circumstances envisioned in the blueprints, the safety of permanent isolation of radioactive waste is guaranteed by a geological safety barrier, which prevents possible spread of contamination to the surface and throughout underground water tables beyond the sanitary defense zone.

“In this way, the zone of radionuclide and chemical contamination as well as possible rises in the radiation background during project accidents is limited to the territory of the radioactive waste repository,” he said. “As per engineering documents, the establishment of a sanitary defense zone of the installation, which will be under constant observation, is planned.”

Nonetheless, questions about the repository’s safety have raised the biggest concerns among local experts, environmentalists and activists.

“However they try to convince us that their repository can withstand earthquakes and floods is all rubbish,” said Kardanets. “They told us the same thing about the Sayano-Shushenk Hydro-Electric Plant, that it was the most contemporary and reliable in Russia,” he said, referring to the Yenesei River dam, which suffered a catastrophic accident in August 2009 that caused flooding of the engine and turbine rooms and a transformer explosion.

“We are seeing only the tip of the iceberg of what is going on in this industry,” Kardanets added.

“To the familiar slogans about the nuclear industry –  the energy of the future and cheap energy –  we must add the terms ‘burial’ and ‘repository,’” said Bellona Murmansk director Andrei Zolotkov. “And the further they are from populated areas the better. This cannot be avoided.

Temporary storage, longer term storage and permanent repositories are an integral part of the nuclear industry’s activities. Yet, questions about the necessity of such installations have long stood on the sidelines of society’s attention and efforts at implementation.

According to Zolokov, this, until recently, is what we knew of storing liquid and solid radioactive waste: dumping it in open water bodies, injecting it in underground aquifers, storing it in special areas about a given nuclear installation without any special precautions, and dumping it into the sea.

“The Krasnoyarsk Region is likely the first fruit-bearing notion in this direction. Siberia has many large enterprises of Russia’s nuclear fuel cycle. More may appear in the future,” said Zolotkov. “Geologists will study suitable sites for repositories and they will apparently be located at a manageable distance from the concentration of facilities using nuclear energy.”

Zolotkov said that scientists from the Kola Scientific Center conducted similar work in the Murmansk Region and found many places that are suitable for long-term storage of nuclear waste. Each region that hosts a large-scale nuclear facilities should – if they have not already – be prepared to build either waste storage facilities or full scale repositories.

Hauling loads of radioactive waste over long distances is expensive and fraught with risks. The Kola Peninsula already has a long term facility for storing reactor vessels and radioactive waste, and another such site is underway near Sosnovy Bor, home to Leningrad Nuclear Power Plant, some 45 kilometers west of St. Petersburg.