ST. PETERSBURG – Norway has earmarked another 100 million roubles ($3.6 million) on rehabilitation projects at the notorious Andreyeva Bay naval nuclear waste storage facility on the Kola Peninsula, a mere stone’s throw from its own border in an agreement signed between the new Murmansk Region’s governor and her counterpart in far north Finnmark county.

Published on June 15, 2012 by Alexey Pavlov, translated by Charles Digges 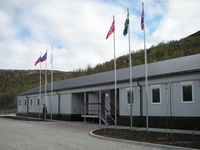 The meeting took place Vadso, the capital of Finnmark county where the two governors – Marina Kovtun of Murmansk and Gunnar Kjonnoy of Finnmark – convened with an eye to joint-nuclear safety projects, particularly continuing efforts at Andreyeva Bay.

“This is a serious danger. A danger every day – it is a bomb in slow motion,” said Kovtun at the meeting. “We need to throw all our strength toward solving this problem, and the Norwegians understand this. They are careful with nature and want to collaborate with us on this issue”

According to Kovtun, Kjonnoy spoke of how dealings with the previous Murmansk administration of Governor Dmitry Dmitrienko practically halted all bilateral progress on this issue. As a result, Norway began doubting that the Murmansk Region was interested in money toward the Andreyeva Bay project, and even began considering exiting the partnership agreement.

Norway’s Ministry of Foreign Affairs even proposed attracting the funding from the European Bank of Reconstruction and Development (EBRD).

“Of course, on the one hand, new sources would have expanded financing possibilities, but I think that it’s a bad idea to switch horses mid-stream,” said Kovtun. “If we did that now, we would face new bureaucratic encumbrances that would lead to a slow down of the whole process. Therefore the governor of Finnmark and I underscored that we want to leave things as they are.”

What Norway has already invested, and were the new funds will go

Norway has already spent 700 million roubles for continued work at Andreyeva Bay. This has financed the building of roads, the construction of an administrative and residential complex, physical safety measures, a stationary dock, a dining hall, a training center, and an aqueduct.

After such significant efforts, the Norwegians don’t want the project to drop off the map – hence they have earmarked the new 100 million rouble tranche. This money will be spent on roads suitable for trucks carrying heavy loads containing spent nuclear fuel and radioactive waste. The price tag for this work alone will be 60 million roubles. A second contract envisions 25.5 million roubles for the construction of a third engineering network to maintain ongoing work.

“If we speak of Andreyeva Bay’s perspectives, the we are currently building a complex for dealing with spent nuclear fuel and radioactive waste. Part of it is already built, but part just remains in blueprints,” said Alexander Krasnoshyonkov, the director of the Northwest division of SevRAO, which is tasked with handling radioactive waste.

Andreyeva Bay’s director also said that SevRAO was also now building the fundamental workshops. The first workshop is to be built on the storage unit for spent nuclear waste, and which will oversee the whole reclamation of spent nuclear fuel, from re-sheathing it and packing it in containers for shipment to the Mayak Chemical Combine in the southern Urals. The second workshop will oversee the conditioning of waste to be sent to Sayda Bay, a former fishing village annexed by the military for storing hulls and reactor compartments from nuclear submarines.

“The construction of these complexes was financed by the Italians. They will ceremoniously be opened on the 12th to 13th of July,” said Alexander Rogachyov, head of the international division of SevRAO.

Bellona-Murmansk urges stepping up the tempo

Andrei Zolotkov, head of Bellona-Murmansk says the construction o the working areas at Andreyeva Bay are not progressing at a striking pace, but that the current tempo gives hope that preparatory operations will soon be completed.

“It would be desirable if the fundamental work on unloading spent nuclear fuel from Andreyeva Bay’s dry storage facilities would begin in the coming years. The international and very similar Lepse project has already been waiting 18 years,” said Zolotkov, referring to years of planning to remove spent nuclear fuel from the former nuclear service vessel Lepse, which contains in its holds 639 spent fuel assemblies, many of them damaged. The ship is currently laid up at Atomflot, the home port of Russia’s nuclear icebreaker fleet – 2 kilometers from Murmansk’s 400,000 strong population.

“In the Russian-Norwegian cooperation there is also a thorny sticking point – the near border emissions from the Kola branch of Norilsk Nickel over which a mutual understanding cannot be reached. Maybe our governor will undertake a solution to that issue,” said Zolotkov of the toxic emissions from the smelting plant polluting air in both Russia and Norway.

Ridding far north of RTGs cause for celebration

On September 12, Finnmark and Murmansk have planned a symbolic ceremony celebrating the completion of a project the two sides began in 2001 – the substitution of strontium 90-powered Radioisotope Thermoelectric Generators (RTGs) to maritime navigation equipment with beacons that run on solar power. The RTGs, most often in remote locations, were ill protected bait for terrorists and a radiological hazard for unsuspecting passers by. They were also prone to metal theft, which left their strontium cores exposed.

Norway financed the swap from strontium to solar power and Russian specialists implemented the project. In total, 180 dangerous radiation sources were completely removed from the shores of the Barents, White and Kara Seas, and the collaborative work of both sides received high accolades.

Now, this experince with RTGs is being applied in the Baltic sea. Norway has already invested 280 million roubles in ongoing efforts there to swap radioactive RTGS with solar powered beacons. The country also plans to earmark another 9 million roubles on the dismantlement of the highly irradiated radiation defence blocs from the RTG encasements and send them and other irradiated parts from the RTGSs to temporary storage.

There currently remain 18 RTGS in the Baltic region and some 38 solar batteries to be installed.