ST. PETERSBURG – A special-purpose train carrying 80 tons of spent nuclear fuel (SNF) from Leningrad Nuclear Power Plant (NPP) near Russia’s second largest city of St. Petersburg is soon to head out to a closed town in Siberia – a first shipment in an envisioned large-scale SNF relocation project that environmentalists fear will turn Siberia into a nuclear dumpsite and drastically increase overall safety risks, while helping none to address the exacerbating threat of nuclear waste accumulation

Published on December 21, 2011 by Bellona, translated by Charles Digges 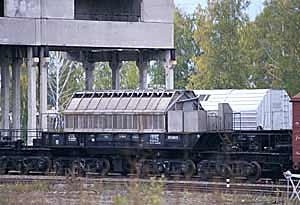 The SNF in question is of the kind generated at Chernobyl-type, RBMK-1000 reactors, currently still in operation at three Russian nuclear power plants – Leningrad NPP, in the town of Sosnovy Bor, in Russia’s Northwest, and Smolensk NPP and Kursk NPP, both in Western Russia.

The waste’s destination is what is called a “dry” storage facility at the Mining and Chemical Combine in the closed town of Zheleznogorsk, also known as Krasnoyark-26, in Central Siberia.

“The first train will head out of Sosnovy Bor in the latter half of December. It will consist of eight cars loaded with 80 tons of SNF from Leningrad NPP,” Oleg Bodrov, who heads the Sosnovy Bor based environmental NGO Zeleny Mir (Green World), told Bellona. “This [will lead to] the exposure to transportation-associated risks of not only St. Petersburg residents, but also [those of] the cities along the [Trans-Siberian Railway], as well as the catchment basins of the rivers along the route – the Volga, Ob, and Yenisei. What’s more, the potential victims of this dangerous cargo have not been informed of these risks, have not participated in making this decision, and have not had opportunity to influence it.”

According to Bodrov, up to 22,500 tons of spent nuclear fuel generated in Russia’s altogether eleven RBMK-1000 reactors still in operation may be relocated from the country’s European regions to Zheleznogorsk, on the banks of the river Yenisei.

Two hundred and ninety “nuclear trains” will be required to transport that much waste – assuming that all three Russian NPPs employing this type of reactors will continue to operate beyond their design-basis useful life terms.

The Zheleznogorsk-based combine has said earlier its new dry storage facility is slated for launch in the latter half of November or December this year, and that Leningrad NPP’s will be the first SNF shipment, of around 65 tons, to be transported and placed into storage at the site.

The nearly 300 special trains carrying the highly hazardous spent nuclear fuel will be transported by rail, across vast expanses of the country, traveling along a route that passes by many large cities – something that the public may potentially deem an issue fraught with risk and worthy of concern. The public, however, may have few avenues to become aware of, much less address, these concerns since the plan is highly classified.

There have already been occurrences in  St. Petersburg when transports of nuclear materials by rail have resulted in tragedy. On February 2, 2010, an explosion occurred on the track section between Leninsky Prospekt and Ligovo below the coupling section of a railcar, injuring the engineer. The explosion had the power of some 200 to 400 grams of TNT and left a meter wide crater. The incident occurred very close to the branching of a railway section leading from the Port of St Petersburg. A day before this 2010 explosion, a ship carrying uranium tails from France had arrived at the port for further transport to the Siberian regions of Seversk and Tomsk.  This explosion – which was later revealed to be the work of neo-Nazis – underscored yet again the dangers associated with transporting nuclear materials through or near St Peteresburg. This is the same area through which December’s shipment of nuclear materials will be hauled.

The nuclear colonization of Siberia

Zheleznogorsk was responsible for fulfilling government defense contracts to produce plutonium for nuclear weapons. This has been halted since 1995, and now Zheznogorsk is one of Russia’s primary spots for dealing with spent nuclear reactor fuel. A technological complex for spent nuclear fuel and the close nuclear fuel cycle is currently being built there. But ecologically and economically acceptable means for reprocessing spent fuel from RBMK-1000 type reactor is currently lacking. Nuclear waste containing plutonium-239 is not a naturally occurring radioactive isotope, and is deadly for all living organisms. Future generations stand to become victims of this toxic substance.

Radioactive waste containing plutonium, cesium, californium and others remain extremely dangerous for thousands of years. Future generations will be saddled with making sure this waste does not enter the environment or fall into the hands of terrorists. The job of the first reactors at Zheleznogorsk were to produce materials for atomic bombs, specifically plutonium. Plutonium’s half life – the period in which its toxicity reduces by two times – is 24,000 years. It is considered safest to house such waste and spent fuel in underground shafts, but even countries that have tasked themselves with such storage options have run into huge costs and unexpected risks. At current, there is no country in the world that can house nuclear waste safely for more than 50 years.

Storage and reprocessing of nuclear waste at Zheleznogorsk creates the illusion that the problem has been solved for Europe. But moving waste from the European part of Russia to the banks of the Yenesei River is just moving the problem.

Some three of the planned eight VVER-1200 reactors to be built in the Russian enclave of Kaliningread, at the Leningrad Nuclear Power Plant, and at the Belarusian plant at Ostrovets are slated for exporting energy to other countries. Such is also the strategy for Visaginas nuclear power plant planned for Lithuania. The ecological strain and risks arising from the export of “clean energy” will not be exported from the country, and the millions of euro it will cost to eventually decommission these plants and clean up the waste is something that is bound to fall to the Russian taxpayer.

RosRAO, a wing of Russia’s state nuclear corporation Rosatom that handled nuclear waste, is forwarding a project to build a radioactive waste repository on the banks of the Gulf of Finland in Sosnovy Bor, the hometown to the Leningrad Nuclear Power Plant, which is 40 kilometers west of St. Petersburg. As such, one more link in the transnational infrastructure for the export of Russian nuclear power and technology is being formed. The planned repository is 250,000 cubic meters, and Ust-Luga has been nominated by the Russian government as the port that will accept radioactive waste.

Nearby in Sosnovy Bor, the private company Ekomet-S deals in smelting radioactive waste. In recent years, the company has smelted some 20,000 tons of irradiated metal. Half of the material was brought from the European portion of Russia. Negotiations about bringing further irradiated metals from Lithuania and Germany have been conducted. The recently adopted law “On management of radioactive waste” permits the repatriation into Russia, for purposes of disposal, of spent radioactive sources that were supplied by Russia to third-party countries as part of specialized equipment.

As such, Russia’s Baltic shores are on the way to becoming a part of the transnational repository for highly active radioactive waste for Europe. According to environmentalists, the unfettered march of nuclear and radiologically dangerous projects in Russia is possible thanks to hobbled environmental legislation and the corrupt scams behind its formulation.

“We demand that the government refuse to accept spent nuclear fuel and radioactive waste,” said Oleg Bordov of Sosnovy Bor’s Green World. “The burden for the storage of these materials must be bourn by the regions and countries that have produced the waste. Aside from that, it is a necessity to develop unified international standards assuring nuclear and radiological safety for the countries in the Baltic and Barents Sea regions. The countries importing nuclear energy must carry part of the burden of the spent nuclear fuel and radioactive waste problem, as well as that of decommissioning nuclear power stations producing this power.”