NOVOVORONEZH, Russia – A public hearing gathered last Tuesday in Novovoronezh, Central European Russia, to discuss the construction of a temporary radioactive waste storage facility for 10,000 barrels of new waste anticipated from Novovoronezh Nuclear Power Plant (NPP) highlights a deeper problem: Russia may soon face an ever-mounting pile of radioactive waste from its old but still operating commercial reactors – a pile that will demand accommodating, managing, and safeguarding for decades to come.

Published on November 29, 2011 by Andrey Ozharovsky, translated by Maria Kaminskaya 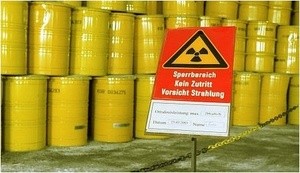 The public hearing in Novovoronezh, a town in Voronezh Region in Central European Russia that is home to Novovoronezh NPP, was arranged to discuss a preliminary environmental impact assessment (EIA) report prepared for the project of a temporary solid radioactive waste storage facility proposed for construction at the site of the plant. The facility is to house 10,000 containers of newly anticipated waste generated by Novovoronezh NPP.

Two factors necessitate the construction of this additional, surface-based storage facility. First, an enormous amount of solid radioactive waste will be generated as Units 1 and 2 at the plant – taken offline in 1984 and 1990, respectively – start to undergo decommissioning.

Secondly, Units 3, 4, and 5 of Novovoronezh NPP are now operating beyond their engineered life spans, which expired in 2001, 2002, and 2010, respectively. There are no capacities at the plant to store waste resulting from the years these units have or are expected to remain in this beyond-useful-life operation. New storage capacities are urgently needed.

This is how this goal is described in the storage facility’s EIA Report (Page 102):

“Design-basis storage capacities for liquid radioactive waste at the nuclear power plant’s units are filled to between 70 and 90 percent at different units (these capacities are determined by the units’ stipulated design-basis operating life spans). When the storage tanks for liquid radioactive waste have filled to capacity, the nuclear power plant will be forced to halt its operations.”

In order to solve this problem, a proposal has been put forward to process this waste by evaporation and then place the resulting evaporator concentrate, or “salt cake” – solid radioactive waste – in storage barrels and stack those in a newly built facility at the operations site (EIA Report, Page 102):

“In order to clear storage space from liquid radioactive waste, this waste can be treated in super-evaporation plants to generate evaporator concentrate which, in its turn, must be accommodated in conditions that comply with requirements set to such products. The facility envisioned in the project examined in the present document meets such conditions. The evaporator concentrate can be placed in special containers in [the proposed solid radioactive waste storage facility].”

Notably, the authors of the EIA report for the new facility admit unequivocally that no option of shipping the containers with radioactive waste elsewhere to a site where it could be reprocessed or disposed of exists in principle – since Russia simply has no such sites to offer to take it (EIA Report, Page 102):

“For the near future, this option remains so far unfeasible due to an absence in Russia of sufficient technological capacities to handle and dispose of radioactive waste.”

What will be built?

The facility proposed for construction at Novovoronezh NPP is a warehouse where 200-litre barrels holding radioactive waste are to be stacked in tiers, ten tiers in all. The apocalyptic picture painted by ecologists – dozens of thousands of barrels with deadly wastes inside, an unwieldy menace left for future generations to inherit – now seems more real than some would like to believe (EIA Report, Page 14):

“The design of the facility allows for organised storage of special 200-litre-capacity metal containers (special-purpose barrels) with the evaporator concentrate that provides for the technological possibility of [subsequent] removal of [solid radioactive waste] for reprocessing and/or disposal. Containers with the evaporator concentrate are accommodated in stacks of up to 10 tiers in height in the storage facility’s compartments.

Storage of containers with [radioactive waste] in the cells of [the solid radioactive waste storage facility] provides for their “compact” arrangement next to each other.

Based on the conditions of the arrangement, the storage facility’s capacity is stipulated at no fewer than 10,000 containers with [radioactive waste].”

Other details about the storage facility and the containers to be used are as follows (EIA Report, Pages 89 and 15):

The [solid radioactive waste storage facility] is a separate building with plan dimensions at 54.0×18.0 [metres] that consists of two [sections]:

How temporary will this storage be?

The purpose of the storage building is defined thus (EIA Report, Page 8):

The document goes on to specify that the proposed option is a temporary arrangement (EIA Report, Page 10):

“The purpose and goal of the planned activity is safe and temporary storage of solid radioactive waste (containers with evaporator concentrate following treatment of liquid radioactive waste […] in the existing [super-evaporation plant]) until such time as the option of placing this waste in a centralised repository is provided.”

For the time being, no “centralised repository” for radioactive waste exists either in reality or in the project proposed at Novovoronezh NPP.

According to the EIA Report, the following radionuclides will be packed into the barrels in the form of salt cake: manganese-54, cobalt-58, caesium-134, caesium-137, and other nuclides. Gamma-radiation levels near the barrels filled with evaporated waste are to be within the range of 25 to …580 microroentgen per second (IEA Report, Page 84).

This is why these barrels must be held or stored in protective containers. This is also why any accident at the planned solid radioactive waste storage facility can have grave, far-reaching consequences.

Storage of radioactive waste is not a simple task, nor is it cheap. If a barrel containing radioactive waste sustains damage, the dangerous radionuclides inside may escape into the surrounding environment, with the serious risk of contamination that that entails.

How safe will this storage be?

Those who estimate the potential environmental impact of such a project must be aware of all possible accident scenarios and their outcomes, and provide due consideration to them in their assessments.

The authors of the EIA Report do list a range of precursor events (EIA Report, Pages 86 to 87): earthquake, equipment failure, human error, fire. A self-evident conclusion is made that the barrels do not take fire – and a not-so-evident one that they will safely resist damage resulting from a fall from a ten-metre height.

For one inexplicable reason, however, this list of potential precursor events does not include one scenario – an accident caused by the crash of a passenger jet. Planes do fly over Novovoronezh. While on a visit to Novovoronezh to attend the public hearing last week, the author of this comment saw three distinct contrails left by airplanes passing over the city.

Stress-test requirements adopted in the European Union stipulate that sites of the nuclear power industry must withstand a plane crash. Should a medium-range passenger aircraft fall on the temporary radioactive waste storage facility that is proposed for the site of Novovoronezh NPP – and this will be a surface facility – a significant number of the 10,000 barrels in storage might become unsealed; a fire will likely burst out following the crash, fed by the fuel from the plane, lifting the radioactive dust and debris into the air; depending on the wind direction, this radiation could then reach both the satellite city of Novovoronezh (three kilometres off the site) and the regional centre of Voronezh (30 kilometres away).

The official EIA Report makes no room to consider such a scenario. Likewise, not a word is said about possible evacuation measures.

Where will the next 10,000 barrels go? Where will other waste go in fifty years’ time?

An environmental impact assessment report prepared for the project of decommissioning of Reactor Units 1 and 2 of Novovoronezh NPP says this process alone will result in the generation of 20,000 containers’ worth of new radioactive waste.

“Based on the assessments made, the overall amount of [radioactive waste to be generated] during decommissioning will total around 20,000 [unrecoverable protective containers],” that report said.

This waste will then be compounded with new waste produced by the three units that remain in operation beyond their engineered useful life terms. Should the two new VVER-1200 reactors be completed and taken online at the site of the second line of construction at Novovoronezh, the rates of waste accumulation at this plant will rise even higher.

The proposed construction of a temporary storage facility to accommodate 10,000 barrels will hardly solve the growing problem. For one thing, one or two more such facilities will be needed within the very near future. Furthermore, this and similar sites are, after all, designed to be temporary facilities: Fifty years hence, they will have to be dismantled, and better and longer-lasting options will have to be found to further store or otherwise dispose of the amassed radioactive hazard.

The critical situation unfolding with the mounting pile of radioactive waste at Novovoronezh NPP is not an uncommon one. More temporary storage facilities will likely be needed soon at the sites of Russia’s nine other nuclear power plants in operation, desperately needed to accept the overflowing waste – and this is not even taking into account the time when other old reactor units will finally have to be decommissioned, resulting in more waste. Postponing for another fifty years the moment when a permanent solution will have to be found for this waste will only give the Russian nuclear industry a relatively short respite. Yet, for now, no answer to this problem is in sight, the looming threat is ignored, and generation of dangerous waste continues.

Editor’s note: This is a first in an envisioned series of articles that will look into the issues of accumulation of radioactive waste at Russian nuclear power plants and other sites of the Russian nuclear industry, the condition that this waste is in, and ways to manage it.