Andreyeva Bay: A tour of a decades-old radioactive dump on its way to recovery

MURMANSK – Last week, a delegation from the public Council for Safe Use of Nuclear Energy in Murmansk Region took a tour of an erstwhile imminent nuclear threat known simply as Andreyeva Bay – an overbursting radioactive dump that environmentalists and international donors have spent ten years bringing under control. Do their efforts show?

Published on September 30, 2011 by Bellona, translated by Maria Kaminskaya 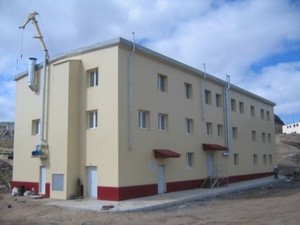 For dozens of years, since the time it was built in the early 1960s, Andreyeva Bay – a former naval base located in a remote section of the Barents Sea coast on the Russian far northern Kola Peninsula – was used as a maintenance complex to refuel nuclear reactors of Soviet submarines and for temporary storage of spent nuclear fuel (SNF) awaiting its turn to be shipped off to the Russian reprocessing facility Mayak in the Urals. Other facilities in Andreyeva Bay also collected and housed liquid and solid radioactive waste generated in the course of operation of nuclear-powered submarines, icebreakers, and support vessels used for nuclear maintenance and refuelling operations at sea. Andreyeva Bay was also where these support vessels were based.

After nearly three decades, the site ceased to accept nuclear and radioactive waste for storage – but not before structural defects combined with overall neglect led to a massive leak of radioactive water from the SNF storage pool in Andreyeva Bay’s Building 5 and to damage sustained by a vast number of spent fuel assemblies in storage.

In 1996, Bellona first sounded the alarm, drawing Russia and the international community’s attention to the deplorable condition of spent nuclear fuel and radioactive waste in Andreyeva Bay – a situation that some experts considered to be precarious enough to result in a spontaneous chain reaction, which could bring the already off-the-chart levels of contamination on the base’s premises to catastrophic proportions.

In 1998, these first efforts finally started to pay off when a government document declared environmental remediation of Andreyeva Bay a priority. International aid started trickling in to help Russia deal with the dangerous legacy. Two years later, the naval base was transferred into the purview of the then Ministry of Atomic Energy – now the State Corporation Rosatom, and a new structure was formed in Murmansk to carry out ecological rehabilitation measures: the Northern Enterprise for Radioactive Waste Management, or, simply, SevRAO.

Now fast-forward to September 2011, I happened to be among a group of twelve invited by SevRAO to see the results of the work done so far.

Because we were not a large party – nine members of the public nuclear safety council and three representatives of other NGOs – the preliminary formalities that included checking our IDs and running the names against the guest list at the check point gates did not take too long.

Back on the bus, we had already been given brief instructions on the do’s and don’ts visitors were expected to observe, including the use of photographic equipment. We were to understand that, lest we got into trouble, everyone should keep up with the rest of the group and wait for official photographs to be made available by the hosting party a day or two later.

In a small conference room at the base, Alexander Krasnoshchekov – head of a SevRAO entity that is now handling Andreyeva Bay’s radioactive waste – gave a rather thorough presentation on his enterprise’s activities.

His report contained many details on both Russia’s and foreign donors’ participation in remediation efforts at Andreyeva Bay in the past ten years. Norway, the United Kingdom, Sweden, and Italy, among others, have been financing or otherwise aiding in practically all the projects undertaken at Andreyeva Bay: building an access road to the site and the on-site infrastructure, including a building for administrative and residential use, the personnel’s changing station, the water mainline, pier, canteen, training centre, sanitary and decontamination area, buildings used to decontaminate  service vehicles, a lab, the automated radiation control system, a substation, an electromechanical shop, a security system, a cover sheltering so-called “dry” storage cells with spent nuclear fuel from atmospheric precipitation, and more.

According to Krasnoshchekov’s report, numerous studies have also been carried out both generally on the base’s territory and specifically in those sections that specialists said warranted in-depth research. Preparatory measures have been completed or are in progress for a number of ongoing projects, he said. Many Russian institutes and companies are involved in the works. In other words, hardly a penny has been spent in vain.

What we were told would indicate that at this stage, Andreyeva Bay has finally become a launching pad for the main project that these remediation efforts have been geared toward: Removing spent nuclear fuel from dry storage tanks at the site, transporting it by sea to a transshipping point at the port of Murmansk, and shipping it off by train to Mayak in the Urals. SevRAO’s management and employees are working toward that goal.

According to SevRAO’s head Valery Panteleyev, the SNF removal works will only start in 2014 at best. But the first steps have already been taken: Last year, a first shipment of spent nuclear fuel that was in a safe enough condition to travel was sent off on board a vessel called Serebryanka, and this year, a first batch of solid radioactive waste was shipped off for further management as well.

Having been bombarded with such tightly packed information about the work accomplished, we were genuinely interested to see everything with our own eyes.

Each of the delegation’s members was issued, as per the rules, a set of protective clothing – including special boots and gloves – and a Geiger counter. The gear was comfortable enough and, in any case, guaranteed that the clothes we arrived in would be protected against potential contamination by radioactive substances.

The tour around Andreyeva Bay took over an hour. All the sites that were accessible for viewing were shown to us – we could come in, have a look at the equipment and the set-up, ask questions, etc. We didn’t go to those sites where radiation levels were elevated, of course, but no such objective was pursued anyway. The so-called special control zone includes the areas where the personnel work, and there are special rules and regulations in place there that no one had any intention of breaking.

Among such sites is the notorious Building 5, the former “wet” storage facility which was the scene of a massive radiation accident in the early 1980s – the disaster that made Andreyeva Bay the contamination threat it remained for decades. Efforts to contain further dilapidation of the building are visible at the site: The exterior looks satisfactory, some support structures have been put in place, and the roof has been repaired.

The worst of the contamination threat has now been confined to the dry storage cells, and the monotonous humming of the ventilation system can be heard in that area: Work is in progress inside the building to bring radiation levels to normal.

A bit of uncertainty has recently crept up about whether Andreyeva Bay could maintain the vigorous tempo of remediation works in the future. Great Britain has quit the project that was focused on building the main site for the bulk of rehabilitation operations. The economic slump in other European countries also makes it difficult to count on continued financial support of Andreyeva Bay projects after 2012. It is then that the so-called Global Partnership programme – a 2002 initiative brought forward by G-8 nations to pour $20 billion over ten years to help Russia secure its nuclear legacy – is supposed to wrap up. Andreyeva Bay’s funding is disbursed via that programme.

And Andreyeva Bay is not the only nuclear or radioactively hazardous site Russia has inherited from the Soviet Union that needs urgent ecological remediation measures. Still left to secure and clean up are the long-term storage site for dismantled submarine reactors in Sayda Bay, the former naval base and nuclear fuel storage and maintenance facilities at Gremikha, the sites of the nuclear fleet management company Atomflot, and nuclear support vessels – to name those in Murmansk Region alone.

Bellona has always believed that sites that posed or still pose a threat as prominent as Andreyeva Bay cannot continue to exist – they are in urgent need of rehabilitation, for the sake of environmental safety both today and in the future.

Having now taken this tour of Andreyeva Bay, I confirmed for myself that Bellona was right back then, fifteen years ago, when it undertook the first steps to trumpet the alarming situation at this site. Our efforts were also not in vain when, in October 2002, we arranged a visit to Andreyeva Bay by a delegation of European Parliament members so that they could see for themselves the condition that the facilities here were in. As before, Bellona will certainly try to see that remediation projects in Andreyeva Bay continue on their course.

What I saw last September 20 tells me that the better part of this hard work has been done, but still much remains ahead. All it takes to complete it is there – at least, on the outside, the project is convincing and inspires confidence. When it is finally finished, it would be a valuable lesson to look back and see what a long arduous path it has been and what a veritable disaster was nearly averted.