President Dmitry Medvedev has called for a businesslike approach to nuclear cooperation with the United States after an environmentally dicey accord on civilian cooperation between the two countries – called the 123 agreement – cleared the way for the two countries to exchange technology and open nuclear joint ventures.

Published on January 13, 2011 by Charles Digges 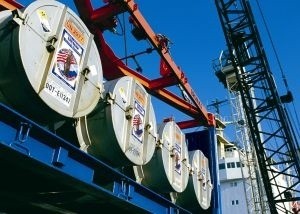 The agreement on peaceful nuclear cooperation was passed by the US Congress in December, but formally came into force Tuesday when US ambassador to Russia, John Beyrle, and Russian Deputy Foreign Minister Sergei Ryabkov exchanged diplomatic notes at a low-key ceremony in Moscow on Tuesday morning.

“This is a major step forward in US-Russian civil nuclear cooperation,” said Beyrle as quoted by news wires, as he and Ryabkov faced reporters after the exchange.

The 123 agreement, so called because its requirements are set out in Section 123 of the US Atomic Energy Act, was first signed by Beyrle’s predecessor William Burns in 2008, but was withdrawn by the Bush administration after Russia’s war with Georgia. US President Barack Obama sent it to Congress again in 2010 as an apparent reward for Russian help with the Iranian nuclear question.

It allows the two countries to exchange nuclear technology and strengthen non-proliferation efforts through the sale of safe fuel to countries that want to develop civilian nuclear programs, while Russian and US research laboratories may develop new forms of the fuel. It also opens the way for Russian and U.S. firms to collaborate on commercial nuclear projects.

“It opens up new technologies — technologies that will help us to combat the global threat of nuclear proliferation, as well as to create new commercial opportunities for U.S. and Russian companies to produce cleaner, safer, and more secure nuclear energy,” Beyrle said.

But the 123 agreement is one in a series of several non-proliferation efforts conceived between the Washington and Moscow over the last seven years that fail to take into account the environmental peril they pose for Russia.

Many environmental groups, including Bellona, are not pleased with the new accord and its implications that spent nuclear fuel of US origin could be imported to Russia for reprocessing – a task that Russia simply cannot bear.

Neither Rybakov nor Beyrle denied that the imports were a possibility, news agencies reported. Rybakov went so far as to claim that Russia has a policy of not importing spent nuclear fuel of foreign origin.

But Igor Kudrik, a Bellona expert on the Russian nuclear industry, contradicted that.

“The deal is that Russian law permits leasing of fuel, that is that fuel of Russian origin shall return back to Russia,” said Kudrik.

Kudrik also noted that the current form of Russia’s draft law on Management of Spent Nuclear Fuel that is on its way to the Duma, makes explicit mention of allowing foreign spent nuclear fuel imports. Conflicts over the wording of the bill have for the time being stalled its progress.

Further, Russia has not been able to import US origin fuel simply because the United States has not let it. The United States controls over 80 percent of the world’s spent nuclear fuel. Russia has long sought permission to import this fuel, which it estimates in well-publicized projections will score Russia’s nuclear industry some $20 billion.

Other ominous environmental threats posed by the new agreement, are the creation of an enormous uranium fuel bank and reprocessing centre at Angarsk, as well as notions of the two countries working together to develop new reactor technologies that would be more fitting to a closed nuclear fuel cycle.

Specifically, this would concern the development of fast neutron or so-called breeder reactors – reactors that are fuelled by their own waste.

Cooperation between US and Russia already well established

Kudrik noted that, overall, the 123 agreement will simply promote the cooperation of the American and Russian nuclear industries, a cooperation that was already being established before 123 came into effect.

Thanks to Putin’s lavish sponsorship of Rosatom in 2009, noted Kudrik, the corporation received 60 billion roubles ($1.9 billion) from the government to start buying itself into the worldwide nuclear industry.

Rosatom has further vigorously promoted the idea of a global “nuclear renaissance” as a way to meet growing energy demand and reduce dependence on fossil fuels. The company will soon have representatives posted at Russian embassies to help cultivate its foreign market.

One early result of this aggressive PR campaign is that  Rosatom currently owns uranium mining pits in the United States, which, as of December 20th, had mined their first tone of uranium.

Russia, furthermore, is already supplying about 40 percent of fuel for US nuclear power stations, and in the past year it signed contracts for $4.9 billion in low enriched uranium deliveries, Rosatom head Sergei  Kiriyenko said.

“Such a close integration with United States and the world nuclear industry makes it even easier for Rosatom to promote its idea to import spent nuclear fuel for storage and eventual reprocessing,” said Kudrik.

“Back in home, Rosatom still has an array of unresolved problems which require time and huge bulks of money to resolve. The importat of foreign spent fuel will only aggravate the problem,” he said.

Business and proliferation reduction versus the environment

The United States has been keen to couch the 123 agreement as a part of Obama’s larger pledge to reduce nuclear proliferation, and claimed victory on Tuesday in that respect. But the new agreement is one of a series of proliferation reduction programs that are costing the Russia environment dearly.

Most recently, questions have been raised surrounding the efforts of the Global Threat Reduction Initiative, inked between the United States, Russia and the International Atomic Energy Agency (IAEA) in 2004, to repatriate Soviet origin highly enriched uranium (HEU) from research reactors in 17 countries.

This fuel is slated for reprocessing and down-blending, but its import has recently raised hackles in the environmental community. Last month, Germany, which was slated to repatriate several dozen kilograms of HEU from a storage facility in Ahaus, refused on the grounds that Russia’s Mayak reprocessing facility was unable to safely carry out its mandate.

Germany is the first of the countries covered in the Global Threat Reduction Initiative to balk at sending HEU to Russia on environmental grounds.

Russia, for its part, was far from applauding the US advertised political strides marked by the 123 agreement and maintained a focus on the business to be done.

“The main thing is not to politicize [cooperation], but to treat it like business,” Medvedev told Rosatom chief Sergei Kiriyenko at a meeting later in the day, according to Reuters.

“It is extremely important from the economic point of view, and America is a key nuclear market,” Kiriyenko told the president, in comments carried by Interfax.

Rosatom said in comments emailed to The Moscow Times that the new agreement would lead to “joint ventures on US territory using Russian technology for uranium enrichment,” but would not involve centrifuge technology.

In the past, Kiriyenko has hinted at joint production with US firms of small-capacity reactors for sale to developing countries.

Kiriyenko told Medvedev that Rosatom expects to land orders to build 30 more generating units abroad in addition to contracts it has already signed, Interfax reported. The company expects foreign orders to grow by at least 50 percent to $30 billion in 2011.