MURMANSK – On December 27, Murmansk environmentalists gave a press conference to highlight some of the results of the past twelve months in nuclear developments: The city is turning into a transit port for nuclear waste from the world over, new reactors projected for Kola Nuclear Power Plant (NPP) threaten to become a site for a real-time nuclear experiment, while no one can vouch for the safety of the plant’s old power units. Summed up, ecologists seem to have a long to-do list for the year 2011.

Published on December 30, 2010 by Anna Kireeva, translated by Maria Kaminskaya 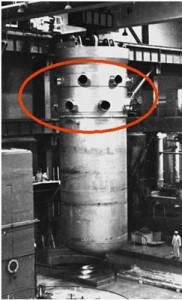 Throughout 2010, the seaport of the Russian Far Northern city of Murmansk, on the Kola Peninsula, served as a transit point for Soviet-origin spent nuclear fuel (SNF) generated at research reactors of various facilities built by the Soviet Union in its former satellite states in Eastern Europe. Information about the routes and timeframes of these transports – upon arriving in Murmansk, the shipments continue their journey to the final destination, the chemical reprocessing enterprise Mayak in the Urals – is not disclosed to the public for reasons of security, even after the deliveries are completed.

“Transporting the SNF [to Russia] is not a solution to the problem, but only moving the problem from one point on the map to another,” said Yury Ivanov, who heads the Kola Ecological Centre in the town of Apatity. Ivanov explained that to date, Russia has only been repatriating SNF burnt in reactors built by the Soviets in the former Communist Bloc. However, the recent ratification by US Congress of 123 agreement– a civilian Russian-US nuclear agreement that sees the two nations beef up their cooperation on nuclear research, production trade, and non-proliferation issues, while also allowing the construction of a uranium fuel bank in Siberia – will open Russia’s borders for shipments of spent nuclear fuel from the many nuclear power plants built all over the world by the US.

Thee Russian State Nuclear Corporation Rosatom is planning a second line of construction at the site of the old Kola NPP, with new reactors, of the VVER-1200 design, built to a Rosatom developed project dubbed AES-2006 (for NPP-2006). The same project has been on offer for the construction of Ostrovets NPP in Belarus, a site the Belarusian government has been aggressively pushing for despite vigorous opposition among environmentalists and the public. New reactor construction at Russia’s Novovoronezh and Leningrad NPPs is based on the same design as well, though it is very long yet before the new reactors are ready to be taken online.

Bellona’s regular contributor on nuclear issues Andrei Ozharovsky was involved in an effort to produce an independent public environmental assessment of the Belarusian project. While studying the project, he and his Belarusian ecologists had access to an official environmental impact report running some 3,500 pages. No NPP project document of such magnitude has ever been at the disposal of environmental NGOs in Russia.

“This is an experimental reactor,” Ozharovsky said of the AES-2006 design. “It has never yet been built anywhere, and there is absolutely no proof either of its safety or its operational capability.”

Ozharovsky said project designers have introduced a modified core geometry and an elongated reactor vessel. The fuel assemblies this model is expected to run on will also be of a new, experimental type. Because the new reactor’s output capacity is hoped to increase by 20 percent, compared to today’s VVER-1000s, an experimental steam generator will be used as well. New, and as-yet untested, structural components are also proposed for the cooling system.

This is a quote from the 2009 annual report issued by the Russian Federal Service for Ecological, Technological, and Atomic Supervision, Rostekhnadzor:

“A regards VVER reactor vessels, the issue of verifiable control over the principal metal and the metal in the welding joints may only be considered in the case of the cylindrical section of the vessel, where a high (over 90 percent) degree of defect control dependability is expected. At present, the areas where the nozzles are located in the reactor vessel – where the most stresses occur both under normal operational conditions and during accidents that involve flushing the core with cold water – do not undergo any control at all with the use of ultrasound testing, thereby leaving open the question of verifiability of control for these areas, as well as rendering the issue the most urgent when analysing the reliability and the remaining lifetime of reactor vessels.”

This is the first time Rostekhnadzor has made a comment of this nature in any of its annual supervisory reports.

It is now up to specialists to assess the extent to which such concerns voiced by an agency as authoritative as Rostekhnadzor may or may not impact future safe operation of nuclear power plants. But one thing can be stated with considerable certainty: Rostekhnadzor’s remarks serve to support the position held by environmental organisations, which protest Russia’s established policy of extending operational licenses of obsolete and worn-down nuclear reactors.

Kola NPP’s aged reactors are one such case. In 2003 and 2004, Rostekhnadzor itself granted each of Kola’s two oldest reactors, commissioned in 1973 and 1974, respectively, a five-year extension on their operational lifetimes, later adding another ten years of useful service to the licenses. Purely from the legal point of view, Rostekhnadzor was in violation of the guidelines that said the reactors, built to run for 30 years, could only be licensed to remain online provided that a prior federal environmental impact study ascertained that there were no risks to keep them in operation – this is what Murmansk regional prosecutors alleged until it became clear the operator company, Rosenergoatom, was not going to yield to demands to comply with the law.

It is likely that at the time Rostekhnadzor was making its decision to prolong the reactors’ operation, the reliability of the nozzle areas in the reactor vessels, and of ways to keep their wear and tear in check, was not at issue. Today, however, the federal agency is raising that point.

Apparently, the authorities’ position is well-founded: With each passing year, reactor equipment at Kola NPP is getting older, a fact that calls for more rigorous and comprehensive checks on its safety and integrity.

Indeed, should an accident happen involving the main reactor equipment, the responsibility for all potentially harmful consequence would fall both on the plant and its operator company, which initiated the license extension procedure, and the issuing body, Rostekhnadzor.

“The design-basis engineered lifetimes of Power Units 1 and 2 of Kola NPP were exhausted in 2003 and 2004,” said Ozharovsky. “It is possible that the persons responsible for the decision-making were misled by representatives of Kola NPP, who said repeatedly that they had information showing that the reactor, its nozzles, and pipelines were in a good condition. It has now been officially confirmed that no accurate data on the reactor nozzles exist at all, while information that would reveal the condition of the reactor vessels can only be verified to 90 percent.”

Not everyone is in agreement with this assessment – or with the one made by Rostekhnadzor, for that matter.

“A multi-level defect control system is in operation at [Kola NPP],” said Sergei Zhavoronkin, executive secretary of Murmansk Region’ Public Council for the Safe Application of Nuclear Energy. “There is, for instance, a system for [remote TV-based] control, as well as ultrasound control.”

This would directly contradict Rostekhnadzor’s findings. Zhavoronkin added: “Personally, I haven’t read this report, but I am certain that [Kola NPP] has reliable systems of control.”

Environmentalists, meanwhile, insist that at this stage, no scientific basis exists to support the practice of extending the operational life spans of VVER-type reactors. It is obvious that continuing to run old and dangerous reactors is only possible without an independent state ecological impact evaluation – which, were it duly performed, would not have let it slide that the applications for extended licenses missed such important information as the condition of the reactor vessels and other structural components, the most significant safety barrier in a nuclear power plant.

It will soon be the turn of Reactor Units 3 and 4 of Kola NPP to complete their engineered life spans.

“The decision now being prepared to extend the operational licenses of Reactor Units 3 and 4 of Kola NPP, whose service periods are to run out on March 3, 2011, and October 8, 2014, respectively, can happen either as a result of a corrupt collusion or as a political, not a scientifically based decision,” said Ozharovsky.

Vitaly Servetnik, head of the regional ecological NGO Priroda i Molodyozh (Nature and Youth), said Murmansk environmental organisations were preparing letters they will send to Rostekhnadzor and local prosecutor’s office, contending the unfounded issuance of extended licenses for Reactor Units 1 and 2.

“In light of this information that has now surfaced, our task will be not to allow extended operational licenses to be issued for Reactor Units 3 and 4,” Servetnik added.

Environmentalists also said, as they tallied up 2010’s successes and shortcomings in the developments in nuclear and radiation safety in Murmansk Region, that it was still an uphill battle to pursue a constructive dialogue with Rosatom, which keeps ignoring non-governmental organisations with anti-nuclear agenda.