MOSCOW – Over a period of one week, radioactive contamination has been found in the city of Glazov in Udmurt Republic in the Central Urals as well as in Moscow. The contamination is thought to be nearly half a century old, but that does not make it any less dangerous.

Published on November 17, 2010 by Andrey Ozharovsky, translated by Charles Digges

A few days later, a truck entering a dump in Moscow set off radiation detectors as it carried a load of garbage from one of several residential areas contaminated by the burial of nuclear waste from labs operating in Moscow. The burial sites, which marked the edge of town in the 50s, are now bustling with new apartments buildings and construction.

According to the situational crisis centre (SKTs in its Russian abbreviation) of Russia’s state nuclear corporation Rosatom, radioactively contaminated soil was found on November 10 in Glazov near the Chepetsk Mechanical Plant. “During work by railroad workers of the railroad workshop of the enterprise on rail route No 6 (which is currently a terminus) a partial discovery of rehabilitated land took place beyond the boundaries of the industrial site next to the fence of the FORMZ factory (where presumably during the 1950s and 60s the territory was used for the storage of uranium containers). The area of contamination was approximately 100 square metres. The level of gamma irradiation exceeded by 10 times normal levels. Soil samples have been taken to determine the isotope content. The territory has been closed off,” the report by the SKTs read.

The next day, the SKTs reported that work had begun on deactivation: “On November 12, 2010, the contraction organisation MINK began deactivation procedures with the use of three KRAZ high lift dump trucks, an excavator and a bulldozer. Removal of the contaminated soil is expected on November 15.”

Yevgeny Presnyakov, the public relations officer for the Chepetsk Mechanical Plant told Bellona Web that the contamination was not found on the plant’s territory and the plant has no relation to it.

“It’s not on our territory. We only gave information about the discovery of the contamination,” he said. According to Presnyakov, investigations of the contaminated territory are being carried out by the Ministry of Internal Affair. He could not estimate the volume of the contaminated soil. “The work is going like this: they removed a g  portion of the soil and measured the radiation. It is as yet unclear how much we are talking about.”

However, by existing data, rough estimates can be made. If it can be assumed that the soil was contaminated to a depth of not more than one meter, then the contaminated area of 100 square meters would be 100 cubic metres of soil. If the soil is to be loaded onto railroad cars, then 10 will be required.

The plant’s website reports that, “OAO Chepetsk Mechanical Plant is the single producer of products from zirconium alloys in Russia and one of the biggest such producers in the world. The plant occupies a leading position among world producers of products from natural and depleted uranium, metallic calcium and is one of the keys in the technical chain of production of fuel, construction materials and materials for nuclear power.” 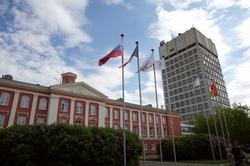 was a residual feature of the operation on this territory in the 50s and 60s of uranium production,” the press release confessed. “Land reclamation work on the in the perimeter of the Chepetsk Mechanical Plant where uranium production used to take place was conducted in 2002.”

The situation at the Chepetsk Mechanical Plant is a reflection of the approach taken to accountability for past contamination and piled up waste taken by Russia’s state nuclear corporation Rosatom: put up a fence, change a name, and confirm that all of this is not the responsibility, even partially, of old and new nuclear firms. But a fence will not shield anyone from radiation.

Where did the radiation in Moscow come from?

Trash with an elevated level of radioactivity was found on November 15 at a trash compacting facility in southern Moscow.

“On Sunday, the duty desk notified the shift head of the trash compacting facility who reported that a truck entering the facility on Podolsky Kursanty street triggered radiation safety alarms,” Interfax quoted an anonymous law enforcement source as saying.

According to the anonymous source, the radiation level was 42 microroentgens per hour, which exceeds norms by four times. He added that it was established that the garbage had been collected in the region of Lenin and Lomonosov Prospekts. The source said that law enforcement officers and radiation service specialists are trying to pinpoint the origin of the radiation source.

In September 2008, radioactively contaminated soil was found on Lenin Prospekt at a construction site on the corner of Krupskaya Street. Local residents called the area a “Kurchatov burial ground.” They recalled that they had seen radiation hazard signs posted in the area. Before real estate developers showed up, there was a wide square where it is entirely possible that radioactive waste from the Kurchatov Institute or another similar institution was buried.

According to Radon, a nationwide radiation danger first responder, it is not rare that radiation turns up in Moscow. More than 70 percent of all reported cases of radioactive contamination come from densely populated areas where a lot of new construction is taking place, as well as in the green zones of the capital. According to the Moscow city administration, there are 11 research reactors in operation in the city and more than 2000 organisations use about 150,000 sources of ionizing radiation, almost 90 percent of which have expired operational life spans.

There is no hiding from radiation

These incidents are a good illustration of radiation safety in Russia. Unfortunately, one can get a does of radiation not only in the Bryansk woods, the areas around Chernobyl hit by fallout, or the Southern Urals footprint. Any nuclear power plant, any company of Rosatom, any scientific nuclear installation can become a source of danger. Derelict burial sites of radioactive waste are even located in the capital, and they will be there for a long time offering new such surprises.