More uranium tails to be greeted in St. Petersburg with protests and bitter public opinion

ST. PETERSBURG – Friday St. Petersburg is expecting another parcel of nuclear waste in the form of depleted uranium hexafluoride, or uranium tails, which will put in at the city’s port, be transported by train through some of its most populous areas, and sent beyond the Ural Mountains for indefinite storage.

Published on September 3, 2009 by Bellona, translated by Charles Digges 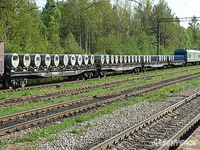 The 1000 tonnes of uranium tails may very well be the last St. Petersburg is to expect to be delivered by the German vessel Schouwenbank under a 1996 contract signed between Russia’s nuclear fuel giant Tekhsnabeksport, and Germany’s Urenco enrichment facilicy in Gronau, Germany.

But this does not mean that the German enrichment giant will stop sending its waste to Russia prior to 2010.

The Urenco contract for 100,000 tons of uranium tails is to expire this year, and the Eurodif contract is supposed to run out in 2010. Rosatom promised in May that neither of the contracts will be renewed.

For the past 13 years Urenco and France’s Eurodif uranium enrichment division of Areva have been sending uranium tails to Russia for re-enrichment. According to date from Russia’s state nuclear corporation Rosatom, Russia has amassed some 500,000 tons of depleted uranium hexafluoride. Other estimates, however, have put that figure at more than 700,000 tons.

Sources from the cities where the uranium tails end up and are stored, often in in the open air, have told Bellona in several interviews that less than 10 percent of the uranium tails putatively sent for re-enrichment in Russia ever make it back to their countries of origin. This means, as pointed out by Vladimir Slivyak, co-chair of Russia’s Ecodefence, Urenco is storing its waste on the cheap in Russia, as keeping the uranium tails at Urenco would drive up operating costs.

Depleted uranium hexafluoride – or UF6 with some 0.2 percent to 0.35 percent of uranium 235 – is a by-product of uranium enrichment. UF6 is a crystallized solid substance that transforms into gaseous at 56.7 degrees Celsius. UF6 differs in a significant manner when introduced into a reaction. During a reaction – with humid air, for instance – hydro-fluoride acid and higly toxic uranite experience high levels of corrosion.

In the event of a UF6 leak hydro-fluoride acid could cause fires and damage to human lungs. Aside from this UF6 as a toxic substance effects the kidneys and is a source of alpha radiation.

Rosatom and many European countries have long insisted the uranium tails are raw material for enrichment and is therefore a resource. The United States Nuclear Regulatory Commission, however, classifies depleted uranium hexafluoride to be radioactive waste.

Environmental organisations, including Bellona, share the opinion of the US NRC, and say that importing uranium tails in to Russia represents a violation of the Russian law “On environmental protection.”

More than 1000 ecological organisations that gathered at the “Green Movement of Russia and Ecological Activation” in March of 2009 adopted a resolution to stand against the import of uranium tails into Russia. “It is necessary to immediately stop the import of depleted uranium hexafluoride from abroad as well as to establish a moratorium on the signing of new contracts – including those allowing the import of this substance – into Russia,” read the conference resolution.

Regions through which the uranium tails are transported have also expressed their dissatisfaction. Protests have followed the railway across which he loads are transported. Authorities have not reacted well to the protests . During one protest against the uranium tail imports in March 2008, activists, several from Bellona, were threatened at gunpoint while trying to take radiation measurements of the transport trains as they stood in a switchyard in St. Petersburg’s populous Avtovo district.

“Unfortunately, issues of nuclear energy and  (radioactively) decaying substances are the exclusive domain of the federal government,” said Nina Popravko, a lawyer with Bellona’s St. Petersburg offices. “Therefore, the public is stripped of the possibility of conducting referendums on the question of transporting such loads that would forbid Rosatom from bringing (depleted) uranium hexafluoride and other radioactively dangerous cargoes near populated places.”

Public campaigns against importing uranium tails into Russia are actively led by the Ekoperestroika environmental group. In conjunction with activists from Germany, France and the Netherlands, Ekoperestroika tracks the shipments and their arrival in St Petersburg, and conducts radiological monitoring of the loads when they arrive.

Ekoperestroika will be picketing on Friday, despite the fact that their permit to protest was turned down by city officials. Ekoperestroika took the injunction against their planned protest to court and was able to achieve an expedited hearing on the matter Thursday.

But at Thursday’s hearing, the court refused to hear witnesses for the plaintiffs, including the deputy head of the Avtovo municipality. A new hearing will be taking place on Friday, and Ekoperestroika says they will go through with their protests irregardless of the court’s findings.

Igor Konyshev, Rosatom’s director of communications with regions and non-governmental organisations, said in April that the loads of uranium hexafluoride will stop being transported through St. Petersburg this year and will divert the delivered to the port at Ust Luga. According to Konyshev, the last uranium tail load will arrive in Russia  in autumn of 2010. Earlier Rosatom had promised that the shipments would stop in 2008 or 2009. Konyshev also promised in May that the contracts with Germany and France to accept their uranium tailings would not be renewed.

Bellona is sending its own set of inquiries to Rosatom on when the contracts to deliver uranium tails to Russia expire, how much depleted uranium hexafluoride will be delivered to Russia by the time these contracts expire and in what month will the last load of uranium tails arrive from abroad.