ST. PETERSBURG – Since the early 1990’s Germany’s nuclear fuel producing giant Urenco has been exporting highly radioactive by-products of its uranium enrichment process – called depleted uranium hexafluoride, or uranium tails – to Russia for re-enrichment and return to its country of origin. 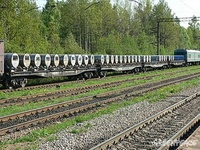 But as environmental groups have often pointed out and Russian nuclear authorities now admit, a mere 10 percent of the waste imported to Russia from Urenco’s Gronau plant is ever returned, leaving several large cites on the eastern side of the Urals to deal with the accruing waste.

Since 1996, under a contract signed between Russian fuel producer Tekhnabeksport (Tenex) and Urenco, Russia will have received 100,000 tons of uranium tails before the end of this year.

The deal was struck, says the Russian environmental group Ecoefence, because a cash poor Russia was willing to offer storage for the waste for a price that was low enough to significantly keep down Urenco’s operating costs.

Many European countries do not consider uranium tails to be waste, but rather recyclable material. But the US Nuclear Regulatory Commission declared, despite the Bush administration’s push for reprocessing nuclear by-products, to be nuclear waste. Bellona holds the same line that uranium tails are waste and that Russia has become Europe’s trash can for the highly toxic substance.

In 2007 alone, according to figures the Russian federal industry oversight agency Rostekhnadzor, 21,000 tons of uranium tails were taken in by Russian but only 1,700 tons of the reenriched product were sent back.

Rotekhnadzor 2007 report also shows that the containers of depleted uranium hexafluoride are stored outdoors “in conditions of inadequate regulatory justification and a significant degree of risk of loss of seal.”
In plain language, that means that existing safety norms are not observed and the containers are not sufficiently proofed against the risk of depleted uranium hexafluoride escaping into the surrounding atmosphere.

The report goes on to say that such storage conditions present “an ecological and radiation danger due to the considerable amount of the material in storage and its high level of chemical activity.”

This is an understatement according to a study performed some years ago by British Nuclear Fuels, LTD, or BNFL. The BNFL report stated that, “The sudden emission of a large quantity of uranium hexafluoride, if taken by the wind, may lead to a large number of victims. Theoretically, in certain weather conditions the deadly concentrations may spread over a radius of 32 kilometres from the place of emission.”

The imported containers of uranium tails have traditionally come to Russia via the port of St. Petersburg, where they are offloaded from ships and put on rail cars for their long journey to the other side of the Urals – a trip that is fraught with chanced for spills and accidents.

The plants where the uranium hexafluoride currently ends for what basically amounts to indefinite storage are in Tomsk, Krasnoyarsk, Angarsk, and Novouralsk.

These enterprises fail to observe safety norms when handling the storage of the dangerous material, environmentalists with Ecodefense group claim, based on Rostekhnadzor reports.

According to Russia’ nuclear state corporation Rosatom, the contracts to import uranium tails will not be renewed, but that is cold comfort for a country that has amassed a total of some 700,000 tons of depleted uranium hexafluoride, and which is also still received uranium tails from France’s Eurodif enrichment division of Areva.