Missing Russian vessel secured from hijackers, but reports conflict on the circumstances – and if the boat carried smuggled nuke material

Russia said Tuesday it had arrested eight men suspected of hijacking the Arctic Sea cargo ship whose sudden disappearance in July sparked an international mystery and a dramatic high seas chase – but has not cleared up the diverging reports on how or why the ship was taken, and why it took weeks for the hijacking to be reported. 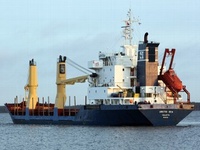 Reports surrounding the hijacking of the vessel have been confusing, with Western officials and media reporting that the take over of the ship ended days ago when alleged pirates fled the ship, and Russian defence brass claiming the vessel was captured by the Russian Navy – along with the hijackers – only yesterday.

Last week, rumours began to surface that the Russian ship might be carrying a load of secret nuclear or radioactive material along with it’s stated load of $1.5 million in lumber. Several British newspapers and web sites have carried reports that MI6, the UK’s foreign intelligence branch, and a special team from Moscow, are investigating the possibility that the ship was carrying nuclear cargo.

But sources in the British Defence establishment refused to go on record saying this was true. Authorities who inspected the Arctic Sea in Finland, from where it set sail, have vociferously denied claims that the boat left their ports carrying nuclear materials.

“I personally believed and still believe that the whole story is a simple hijacking of a ship for ransom and the Somalia pirates were an inspiration,” said Bellona’s Igor Kudrik, an expert on the world wide nuclear industry and nuclear smuggling.

“There are a lot of unclear parts of the story, but the whole nuclear smuggling rumour is a way too much Hollywood”.

Yet, a source within Russia’s Defence Ministry told Bellona Web there must have been something aboard the ship that officials certainly wanted to track down, though he could not say if it was radiological.

As soon as the ship was reported the hijacking on July 28, four days after it put to sea, the Russian Navy launched an unprecedented sea hunt that included surface warships and nuclear attack submarines.

Russian military officials reported that they had safely brought the ship under their control off the western coast of Africa Tuesday, though they would not disclose the exact location, Russian media reported. No shots had been fired to bring about the surrender of the Arctic Sea’s hijackers, Russia’s Defence Ministry said.

The Arctic Sea was reportedly seized by hijackers in Swedish waters while en route from Finland to Algeria, Sweden’s chief investigator on the case, Ingemar Isaksson, told Swedish Radio. He said the hijackers had made a thorough search of the boat.

No ships have been hijacked in the Baltic for several centuries, Swedish maritime analysts said and suggested the operation to take the ship would indicate state involvement and secret cargo that was possibly nuclear.

Finnish officials told Bellona Web that firefighters had taken the unusual step of conducting radiation tests on the timber-bearing freighter before it left port in Pietarsaari in western Finland, and that the results were negative.

Russian media reported Tuesday that the eight hijackers, two Russians and six nationals of the Baltic States, were arrested at sea, and were being questioned along with the Arctic Sea’s 15 Russian crew members aboard the Russian warship Ladny.

But these reports conflict with Isakssons’s comments to Swedish Radio and reports by the BBC, both of which reported that the hijackers had fled the Artic Sea some 12 hours after taking it in a rubber dingy.

“It is all really very strange,” Pavel Felgenhauer, a defence analyst for Novaya Gazeta, told Bellona Web in an interview from Moscow. “The reports don’t add up and I don’t know what the variations mean.”

Other observers, including Russian political analyst Yulia Latynina, said that many elements surrounding the ship’s disappearance, including initial speculation that it had been seized by pirates, do not add up.

Latynina said she believes the incident was neither a pirate attack nor involved ordinary cargo, but rather involved some kind of "highly illegal cargo."

She says the cargo was possibly nuclear components or, more likely, weapons being sold to a Middle Eastern country.

According to Swedish media reports, the hijackers had boarded the Arctic Sea via a boat with “police” painted on the side of it. Isaksson said that the first Sweden had heard of the vessel’s taking was when he was contacted by the Russia Foreign Ministry, which inquired as to why the vessel had been stopped.

Latynina says she thinks there was a disagreement between the various people involved, and does not rule out the involvement of "special services."

A source within Russia’s Defence Ministry, who requested anonymity said that the scale of the operations to reclaim a ship carrying timber were “extraordinary.”

“There must have been something aboard the ship that our government wanted to stop,” said the source. He said he did not know if the ship had been carrying any kind of nuclear material, but did acknowledge that Russia was often sluggish in reporting nuclear material that has gone missing from it’s territory.

But this did not change the official version coming out of Russia. Defence Minister Anatoly Serkyukov told Russian media that the alleged pirates had contacted the Arctic Sea saying they were having engine trouble, and made no mention of the initial report that the supposed hijackers had used a fake police boat.

"These people, claiming their boat had engine problems, boarded the Arctic Sea and, using the threat of arms, demanded that the crew follow all of their orders without condition," he said, according to Russia reports.

The crew set a course for Africa and turned off all navigational and tracking equipment under orders from the pirates, Serdyukov said.

He said the operation to "liberate" the 3,988-tonne cargo ship came about as the result of coordinated action between Russian naval and air force units, but did not elaborate. Arrangements were being made to repatriate the Russian crew, he added.

"Eight people – not members of the crew  – have been detained," he added, in remarks to President Dmitry Medvedev reported by Russian news agencies.

None of the official commentary by upper echelon Russian officials made any mention of the reports that the hijackers were reported to have fled the vessel.  Nor did Russian officials go on the record as to the motives of the apparent hijackers.

Aside from the rumours of the ship carrying hidden nuclear material, Swedish police investigator Isaksson said the hijackers may have been looking for drugs. Police in Finland confirmed that a $1.5 million ransom demand for the ship’s return had been issued. But Finnish authorities again denied rumours in the press that the ship was carrying a secret cargo of nuclear material.