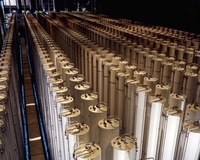 Under the contract, state-owned Tenex will provide direct supplies of enriched natural uranium to Exelon between 2014 and 2020, the statement said, without indicating the amount of uranium to be supplied or its price.

Last month, Tenex signed three landmark deals to supply over $1 billion worth of uranium directly to US electricity firms Pacific Gas &Electic, Ameren Corp, and Luminant. The Tenex contracts with these companies are also to begin in 2014.

The year beginning all four contracts comes one year after the expiration of a major non-proliferation agreement between Russia and America, called the HEU-LEU agreement or “Megatons to Megawatts” under which Russia sold the United States uranium that had down blended from nuclear weapons for use in US reactors. It expires in 2013.

The Megatons to Megawatts agreement was signed in 1994, and is facilitated by the United States Enrichment Corporation, a former division of the US Energy Department.

Bellona Russian nuclear industry expert Igor Kudrik said that he hopes Russia’s state nuclear corporation Rosatom will use the cash windfall wisely and devote it to nuclear remediation projects in Russia, where vast areas have suffered and continue to suffer, from the development of nuclear weapons – including areas where enrichment for US customers takes place.

Consequences for the environment
Alexander Nikitin, director of Bellona’s St. Petersburg offices meanwhile pointed out that the new uranium enrichment deal between Tenex and US utilities will rely on virgin uranium rather than weapons uranium.

European enrichment firms like France’s Eurodif and the German –Dutch joint venture Urenco are both sending tons of uranium tails under contracts that expire in 2014 and 2009 respectively despite clamorous protests of the Russian population.

The contracts stipulate that the uranium tails are to be re-enriched and shipped back to their home countries, but less than 10 percent have been treated this way since the contracts were signed in the early 1990s, according to the Russian environmental group Ecodefence.

“No one know what to do with this ‘gift’ – Rosatom wants to enrich it and use it as reactor fuel,” said Nikitin. “Of course, all countries, including the United States, would like to use only ‘clean’ atomic energy without dealing with mining uranium, enriching it, spent nuclear fuel radioactive waste, and so on,” he said.

“Only one country in the world agrees to deal with all of these threatening technologies and sell other countries the clean product – Russia,” Nikitin added.

Short history of the new nuclear fuel deal
US anti-dumping laws, which were relaxed last year, had allowed Russia to begin to sell some uranium in the United States, beginning in 2011 under an agreement called the Amendment to the Russian Suspension Agreement of February 2008.

Under the amended agreement, the USA will import Russian commercial uranium products from 2011 under new legislation. The new rules will ultimately see an end to measures meant to stop Russia dumping cheap uranium on US markets.

The amendment allows Russian companies to sell low-enriched uranium (LEU) to US nuclear generators. Russia will be able to supply limited amounts of nuclear fuel for reactor reloads from 2011, while the supply of initial fuel loads for new reactors would be unlimited. All limits are to be phased out by 2021, World Nuclear News reported.

The commercial doors were flung open at the end of May with the signing of the first three company to company contracts beginning in 2014.

‘HEU-LEU’ not Moscow’s cup of tea
Nikitin pointed out that Russia has had an abrasive relationship with the Megatons to Megawatts agreement since it’s signing. Indeed, while USEC has repeatedly said it is paying fair market prices for Russia’s down blended uranium, Tenex complains it is getting underpaid.

In his announcement of the new contracts with the US utilities at the end of May, Rosatom Chief Sergei Kiriyenko announced that Russia has a uranium reserve of some 1 million tons.

“If we take into account that Russia is currently trying to sign contracts to get natural uranium from Australia, Kazakhstan, Mongolia and others, it is clear that it wants to and will search out markets for uranium sales,” said Nikitin.

“It’s business, and dirty at that. But money doesn’t smell.”

US’s biggest uranium supplier gets bigger still
Under the Megatons to Megawatts programme, Russia was, despite the anti-dumping laws, the United States’ single largest uranium merchant, powering some 44 percent of US reactors.

Exelon, of Chicago, owns and operates more than 38,000 MW of generating capacity, markets energy commodities, and transmits and distributes electricity to about 5.4 million customers in northern Illinois and southeast Pennsylvania, as well as natural gas to about 480,000 the Philadelphia area.

Igor Kudrik, a nuclear industry expert with Bellona, noted that Russia’s highly enriched uranium (HEU) stock was estimated to be 1200 tonnes after the collapse of the Soviet Union, and that the Megatons to Megawatts agreement was meant to dispose of 500 tons of this excess. But the programme, he said, played a dual role.

Whither Megatons to Megawatts?
“The positive side of the agreement was that enormous volumes of HEU will be eventually destroyed,” by 2013, Kudrik said.

“The negative side is that the Russian nuclear industry remained largely unreformed as the agreement sponsored its existence in its Soviet form.”

Russia has long been knocking on America’s door to provide more fuel services in the United States than it had been allowed under the USEC HEU-LEU contract, noted Kudrik, as enrichment services and uranium sales are two of the few activities that bring cash to Russian state nuclear corporation Rosatom.

It’s other pet projects, such as building nuclear power reactors abroad lead to financial losses, as the projects are inevitably plagues by delays, s witness the long overdue Bushehr reactor in Iran, started by Germany, completed by Russia, but still to go online.