ST. PETERSBURG – In a landmark and long awaited decision, Russian state nuclear corporation Rosatom announced it is not interested in extending contracts to import depleted uranium hexafluoride, or uranium tails, for further enrichment in Russia under contracts it signed with Germany and France, said Rosatom spokesman Igor Konyshev. 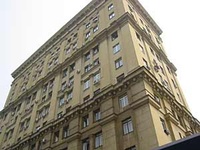 According to Konyshev, who spoke at a May 20th press conference in Tomsk near where many of these uranium tails end up, the transports will continue for at least another year and a half. But the refusal to renew them seems to be a tacit acknowledgement that the contracts for the import of the uranium tails – which is classified as nuclear waste by US nuclear oversight officials – were a mistake.

Officially speaking, Konyshev said the import of uranium tails is not economically justified.

“Now, while our own atomic energy and international participation (in nuclear projects) is developing sufficiently, we have something with which to augment our distributive power,” Konyshev told reporters, according to Interfax Siberia. “Therefore, these contracts do not seem economically effective to us.”

Konyshev said the contracts with Germany and France, which were signed in the 1990s, when Russia’s enrichment capabilities were laid up, and Russia needed any kind of contract it could get to pad the books. It remained unclear what precisely happened with the evaluation of the economic effectiveness of importing western European waste of enriched uranium. It is apparent that public protest and the threat of anti-corruption investigations into the conditions under which the dubious contracts were signed had an influence on Konyshev’s announcement.

“We have already taken this decision relative to one contract and have not extended its deadline because one o the contracts expires in 2009,” said Konyshev.

“The second contract ends in 2010, and there the decision should be taken this summer, but no preparation for this decision has yet been undertaken.”

From where and to where to the uranium tails go?
Konyshev evaded talking about where the uranium tails stored in Russia come from, but it has long been common knowledge that they are shipped in by the German-Dutch Urenco nuclear fuel joint venture, which maintains enrichment facitities in Gronau, Germany and Almelo, the Netherlands.

The Urenco contract closes this year, and soon at that. The second contract, with Eurodif, the enrichment subdivision of French state nuclear giant Areva, could keep delivering depleted uranium hexafluoride for a year and a half.

Konyshev clarified that the re-enrichment of the uranium tails takes place at four different facilities in Russia – in Seversk, near Tomsk, in Novouralsk, near Yekatrinburg, in Zelenogorsk, near Krasnoyarsk, and in Angarsk, in the Irkustk region – all which was also common knowledge.

The shipments of the tails are routinely accompanied by environmental protests, often spanning all the way from Gronau, to the Port of St Petersburg where the material is offloaded for transport by rail, to the cities that eventually become its begrudging homes.

Rosatom: fight coal not radwaste transport
According to a study done by British Nuclear Fuels, Ltd. The transport of uranium tails is highly dangerous.

"It is clear that the sudden release of large quantities of uranium hexafluoride if windborne could conceivably cause large numbers of causalities,” reads BNFL’s study. “In theory, such an occurrence could in certain weather conditions produce lethal concentrations in places (32 km) from the point of release."

This notwithstanding, Konyshev insisted at his press conference that transporting radioactive material via rail was less dangerous than transporting coal, Interfax-Siberia reported.

“I therefore suggest that we begin to fight against cisterns of ammonium, acid, gasoline, and coal transports because they relative to four to five categories – as a counterbalance our loads relates to the seventh category,” said Konyshev. How Rosatom plans to lead the fight against coal transport Konyshev did not explain.

The comparison between chemically toxic and radioactively toxic substances and coal was taken as a bad PR move.

“Saying that transporting coal is more dangerous than transporting radioactive waste is something only a Rosatom spin-doctor could say – it’s not worth taking such ludicrous announcements seriously,” he told Bellona Web.

Some 100,000 tons of uranium tails have been brought to Russia by Urenco. Ecodefence Co-Chairman Vladimir Slivyak has called the contracts “cynical and amoral business” and has demanded an immediate stop to the imports. Ecoperestroika promises it will continue to protest the arrival of the uranium tail loads at the Port of St. Petersburg.