A series of protests against the continued import from Europe to Russia of depleted uranium hexafluoride, or uranium tails, culminated in Moscow on Monday after activists had last Thursday demonstrated in St. Petersburg against what has been called the largest single import of the waste to Russia ever. 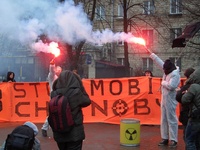 Some 1250 tones of uranium tails, the by-product of uranium enrichment for use in nuclear reactors, was sent through the Port of St. Petersburg on Thursday from Gronau Germany, where the German-Dutch-British joint venture Urenco maintains an enrichment facility.

The arrival of the MV Shouwenbank, the vessel carrying the uranium tails in St. Petersburg on Thursday, sparked unified outcry from numerous Russian environmental groups, which promise to dog the shipments along its route to storage in Siberia and take radiation measurements of the rail cars. Click here and here for video of the St. Petersburg protests.

According to the Russian environmental groups Ecodefence, ECOperestroika and Greenpeace Russia, who staged the protests in St. Petersburg as well as on the steps of Russia’s state nuclear corporation Rosatom in Moscow, it is the largest single parcel of uranium tails to have ever been sent to Russia.

The transportation of the tailings began on the night of March 12th from a uranium plant in Gronau, Germany, and ran a gauntlet of protestors along the rail route to the Port of Rotterdam. The shipment of the cargo from railway sidings to the ship took 36 hours, the ECOperestroika said.

Bellona’s St. Petersburg office has demanded an immediate cessation of the shipments

Thursday protest leads to activist’s detention
Thursday’s protests in St. Petersburg resulted in the police detention of ECOperestroika’s Rashid Alimov, formerly of Bellona, for allegedly violating fire safety rules for the use of flares during the protest, and administrative guild lines on holding public events, said ECOperestroika representative Vera Ponomaeva.

At a press conference prior to the protests Alimov told reporters that, “We are protesting nuclear transportation through St. Petersburg.”

“Another shipment of radioactive waste to Russia is arriving despite such activities being completely illegal, and in violation of the promises of the Russian Nuclear Energy State Corporation, or Rosatom, to stop the import of so-called uranium tailings,” Alimov wrote earlier on the organization’s web site.

“The transportation of such cargo is extremely dangerous. It is fraught with incidents in which containers have become depressurized, which can lead to the poisoning of a large number of people, and to the toxic and radioactive pollution of large areas, including Russia’s big cities,” he said.

Alimov said ecologists intend to measure radiation levels in the vicinity of the current cargo along its route through Russia.

Moscow demonstration forcibly small
Monday’s demonstrations in Moscow were harshly restricted by police, according to Ecodefence’s co-chair Vladimir Slivyak, who said the number of protestors was capped at police at seven.

The Moscow demonstrations spoke out not only against the uranium tail imports, but also the construction of new nuclear power plants in Russia, which is opposed by 78 percent of Russians, according to a ROMIR poll taken last summer.

The Moscow demonstration dovetailed with the end of a conference of some 100 environmental groups, which adopted an appeal calling for an immediate halt to import of the uranium tails. The groups urged Russia’s Prosecutor General to examine the legality of the imports.

Speaking to the issue of continued uranium tail imports, Greenpeace Russia’s energy programme head Vladimir Chuprov said, “The contracts between Tekhsnabeksport and Western companies expire in 2009. Greenpeace insists they must not be renewed.”

Shipments pose enormous dangers for Russian citizens
The uranium tail shipments, which are loaded to rail cars at port and sent for storage in Siberia, are part of a 1996 contract between Russia’s nuclear fuel giant Teksnabeksport (Tenex) – a branch of Rosatom – and Urenco that provides for the import of 100,000 tons of the fuel.

The rail transport of the waste brings it immediately through some most populous neighborhoods St. Petersburg and its 5 million residents, and previous shipments have waited in switching yards in the city’s Avtovo region for several days. The shipments continue through other large population centres as they travel east.

Environmentalists from Bellona, Ecodefence, Greenpeace and ECOperestroika have submitted data that the waste cars during previous shipments have emitted radiation exceeding norms by some 30 to 40 times.

ECOpererstroika’s Alimov and Ecodefence co-chair Vladimir Slivyak have called the transports “insane” and referred to research carried out by British nuclear firm BNFL on the disastrous effects of depressurisation of the waste containers or a spill.

“The sudden emission of a large quantity of uranium hexafluoride, if taken by the wind, may lead to a large number of victims. Theoretically, in certain weather conditions the deadly concentrations may spread over a radius of 32 kilometers from the place of emission,” BNFL’s research indicates.

Rosatom expresses dismay at shipments
Rosatom chief Sergei Kiriyenko made statements in 2007 saying that he is “firmly against” the uranium tail imports and that the contracts will be terminated when they expire.

“Even though scientists say we should keep nuclear waste to reprocess it later into valuable materials, we believe we shouldn’t import foreign waste into Russia,” Kiriyenko said at the time.

On Thursday, Rosatom spokesman Igor Konyushev confirmed the shipments would stop when the contracts ran out – but put a more flexible terminus on their cessation.

“In 2009-2010 the old contracts on the additional concentration of (uranium tails) will run out, and we will not prolong them or sign new contracts,” he said

Urenco, whose major shareholders include the German energy firms E. On and RWE, holds about a quarter of the world’s nuclear fuel market.

Urenco’s contract expires this year and environmentalists say it is clear that the enrichment giant that has already imported more than 80,000 tons of that agreed amount is racing to get rid of the some 20,000 tons remaining on its contract.

Already languishing under 700,000 tons of foreign uranium tails that in many cases are stored in the open air in the cities of Novouralsk, near Yekatrinburg, Seversk, near Tomsk, Angarsk, near Irkutsk or Zelenogorsk, near Kransnoyarsk, Russia has reeived the depleted uranium hexafluoride from not only Urenco, but Eurodif, a division of France’s Areva.

The Urenco load that arrived on Thursday is slated for storage in Novouralsk, Slivyak said.

Uranium tails: waste or material for re-enrichment?
Russia’s law On Atomic Energy Use defines as radioactive waste those nuclear and radioactive substances for which there is not further use.

The United States Energy Department in 2005 classified uranium tails as waste. Many countries in Europe, however, view the material as the raw stuff of re-enrichment. Russian nuclear authorities, as evidenced by Kiriyenko’s statements, are still on the fence.

While the imports continue to slide into Russia under the aegis of raw material for reprocessing it is increasingly apparent in recent years that some 90 percent of that material imported to Russia to be reprocessed is not going anywhere, according to the Russian environmental groups and Bellona.

Despite this, Kiriyenko still maintains that the uranium tails are fully reprocessed and sent back to their countries of origin.

According to Ecodefence research, the ongoing storage lays the environmental and financial burden of keeping the material on Russia – according to analysts, storage of uranium tails in several countries costs from $2 million to $22 million per thousand tons. Urenco is therefore in a hurry to unload its last contracted 100,000 tons on Russia to keep down its own production costs.

Protests against the import of nuclear waste to Russia are also taking place in other Russian cities that lay along the route of the transport, including Yekaterinburg.