Published on March 9, 2009 by Charles Digges 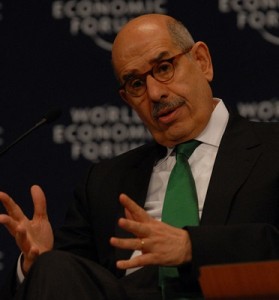 Kuwait agreed last week to contribute $10 million for the system, which is intended to encourage developing nations to forgo building domestic fuel production plants that could be modified to produce nuclear-weapon materials.

One country that is anxiously raising its hand to host a fuel bank is Russia, which has offered up the Angarsk Electrolysis and Chemical Combine in Siberia as a site for enriching, reprocessing and producing uranium fuel. Russia’s state nuclear corporation Rosatom has already gone a long way in developing plans for the site, which has already been inspected and preliminarily approved by the IAEA.

The IAEA plans to develop a bank blueprint for its 35-nation governing board to review at its June session, IAEA chief Mohamed ElBaradei said.

The framework could potentially call for all future fissile material production facilities to be placed under international control and for existing sites to be gradually transferred to multilateral hands.

Revisiting Eisenhower’s ‘Atoms for Peace’
A nuclear-fuel bank, monitored by the Vienna-based IAEA, has been under discussion since the Administration of US president Dwight Eisenhower as a way to assure supplies of reactor-grade uranium. The agency has promoted the establishment of a nuclear-fuel bank to dissuade countries such as Iran from setting up uranium programs that could be used to increase enrichment to the level required for atomic weapons.

"The proposed fuel bank is a bold agenda and it is clearly not going to happen overnight,” said ElBaradei in a statement to the IAEA Board on Friday.

“But bold measures, including assurances of nuclear fuel supply and multinationalising sensitive parts of the nuclear fuel cycle, are vital if we are to enlarge the contribution of atomic energy to peace, health and prosperity throughout the world while curbing the proliferation of nuclear weapons and eliminating them altogether,” he said.

Bellona questions intent of fuel bank
Bellona nuclear energy expert Igor Kudrik called into question the primary intention of the fuel bank, which is to prevent so-called rogue nations, primarily Iran, from acquiring access to reprocessing technologies. This notion has already been undermined because “Iran has already said it wants to develop a full fuel cycle of its own,” said Kudrik.

Meanwhile, said Kudrik, countries that do not already have nuclear power plants would purchase fuel for the reactors that they build directly from a fuel producer rather than a fuel bank. Furthermore, countries that do not have their own reprocessing technology do have access to the fuel market , and contracts for fuel usually stipulate that spent fuel be returned to the producer, said Kudrik. 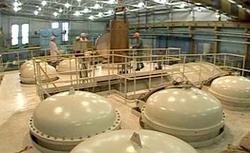 On February 23rd, Russia submitted a formal plan to the IAEA that provides for the enrichment of uranium in a shared facility in Angarsk. Armenia, Kazakhstan and Ukraine are participating in the project, which doesn’t require them to give up their own enrichment technologies.

“We hope to see a tangible product emerge before the current era of agency leadership draws to a close,” the US said in a statement to the IAEA board. Elbaradei is expected to retire after 12 years at his post in November.

The US said Friday it supports the Russian proposal, adding that it’s possible to implement more than one fuel-bank plan.

The US has a great deal of clout in the IAEA regarding possible sites for fuel banks. US tycoon Warren Buffett in 2006 gifted $50 million toward the fuel bank programme via the powerful Nuclear Threat Initiative (NTI), a Washington-based anti-proliferation NGO.

NTI offer the grant to the IAEA on the contingency that the agency the additional $100 million from other sources.

Strong public and private US support
US Congress voted in the same year to provide a $50 million matching grant to Buffet’s to the IAEA. US interests have since stumped loudly for the Angarsk proposal, and there has been little dissent publicly voiced within the new Administration of Barack Obama.

His secretary of state, Hillary Clinton, just finished a trip to Russia where she discussed a broad range of arms control issues, among them enlisting Russia’s assistance in pressuring Iran away from its apparent ambitions to acquire nuclear weapons, with Russian Foreign Minister Sergei Lavrov.

While a State Department staffer with knowledge of the talks told Bellona Web that the fuel bank notion was not discussed directly in Clinton’s meetings with Lavrov, he said that  “support for (the Angarsk site) could be an additional political inducement in reengaging Russia on arms control issues.”

The fuel bank has received the endorsements of Richard Lugar, the ranking member of the Senate Foreign Relations Committee, and Sam Nunn, Georgia’s former Democratic Senator who now co-chairs NTI. He and Lugar wrote in 1991 the legislation for Nunn-Lugar, which created the Cooperative Threat Reduction programme.

Under what ElBaradei dubbed an "ideal scenario," the bank would offer nuclear fuel to all nations complying with IAEA inspection requirements, which operate independently of political interests; supply fuel in accordance with predetermined rules that are "objective and "consistent"; and would not require fuel recipients to give up Nuclear Nonproliferation Treaty rights.

Since NTI announced the initial $50 million tranche and US Congress agreed to another $50 million, the United Arab Emirates has pledged $10 million, Norway has promised $5 million and the European Union agreed to provide up to 25 million euros, or about $32 million, for a total of $147 million.

Rift between the haves and have-nots
Yet, a rift has developed between nations that have nuclear programmess and those that don’t.

Countries that already enrich uranium favor the fuel bank because it may keep competitors from entering the market. About a third of the 30 countries that run nuclear power stations produce their own enriched uranium.

The rest rely on the market for supplies from Europe, Japan and Russia. Those that plan programmes say the fuel bank threatens their right to enrich uranium, guaranteed under the nuclear Non-Proliferation Treaty.

But NTI ensures this will not be the case.

To access the money for the proposed fuel bank, countries won’t be required by the NTI to put aside their own uranium- enrichment programmess, as originally envisioned, Charles Curtis, an NTI co-chairman, told the Bloomberg news agency.

The NTI wants ElBaradei to come up with a plan to administer the money, Curtis said. ElBaradei says there won’t be a plan until the board authorizes the agency to accept the money.

Some IAEA member states have resisted giving any more than a token amount of funding because they fear endorsing the fuel bank will eventually place restrictions on their own enrichment programmes, NTI has said.

When Buffett and NTI first offered the money in 2006, they envisioned that the enriched uranium would be available to countries “that have made the sovereign choice to develop their nuclear energy based on foreign sources of fuel-supply services and therefore have no indigenous enrichment facilities,” Sam Nunn said on the NTI Website.