Continuing fighting between Russian and Georgian forces over the breakaway regions of Abkhazia and South Ossetia have plunged two crucial US-led anti-nuclear theft programmes into chaos, say officials with the US Department of Energy, which leads the nonproliferation and anti-nuclear smuggling efforts.

One high-priority programme that was assisting the former Soviet Republic to identify possible smugglers of nuclear bomb components across its porous borders has been halted by the military struggle that erupted two weeks ago. US programme advisors have, according to DOE officials, been forced to flee the region.

Another DOE effort that has been upended by the local violence is the tracking of abandoned radioisotope thermal generators (RTGs) – thousands of highly radioactive strontium and caesium powered batteries that were placed throughout remote portions of the Soviet Union as navigational beacons and power sources.

These sources have fallen into decrepitude, and much of the paperwork on their whereabouts and conditions were lost with the Soviet Union’s fall. The RTG units are frequently dismantled for valuable scrap metal by scavengers. More troubling, the strontium and caesium sources also go missing.

The DOE-led effort to isolate, dismantle and dispose of these forgotten facilities “will, for the time being have to be shelved,” said a DOE source in a telephone interview.

“The ensuing poverty and migration that will come of this conflict will lead to scavenging of these radioactive batteries for scrap metal and in some cases the fuel itself – they pose both a danger to civilians and a proliferation danger, because who knows now who can get at them,” said the source, who asked his name not be used as he is not allowed to speak publicly on the issue.

Georgia last hope against nuclear traffic
Georgia carries the brunt of law enforcement activities geared against possible traffickers in nuclear materials and is considered by the US government to be a hotbed of nuclear smuggling. The majority of nuclear parcels that are stopped by Georgian interior ministry officials are brought through the lawless break-away republic of South Ossetia, whose capital, Tskhinvali, was attacked by Georgian forces on August 6th, thus precipitating the current clash.

The National Nuclear Security Administration (NNSA) a semi-autonomous division of the DOE, which oversees the department’s nuclear nonproliferation efforts in the former Soviet Union, reported that in 2006 Georgian authorities detected and seized small amounts of plutonium and cesium-137 during two separate smuggling attempts, according to the Stanford University Database on Nuclear Smuggling, Theft and Orphan Radiation Sources, one of the world’s most comprehensive nuclear smuggling tracking projects.

Over the past decade other radioactive materials, including plutonium, have also been intercepted on the black market, said Georgian officials in statements that were confirmed by the Stanford Database.

"NNSA regards work in Georgia as a priority due to its location with respect to potential nuclear smuggling routes," said NNSA spokeswoman Casey Ruberg. "We look forward to continuing this work as soon as advisable."

Are Georgia’s borders secure?
Last week during meetings that were scheduled before conflict exploded in Georgia, American and European nuclear terrorism experts focused their discussions on the worsening situation in Georgia.

“We have raised questions about this conflict and about the broader issues that it raises,” former Ambassador and Counselor of the United States Department of State under the Clinton Administration, Wendy Sherman, said. Sherman is now a member of the US Congress’s Commission on the Prevention of Weapons of Mass Destruction, and a foreign policy advisor to Presidential candidate Barack Obama.

“The commission in taking a look at what else we might be doing,” she said from Vienna, where the congressional body was meeting, adding that the central question is: “Are (Georgia’s) borders secure?”

Georgia says they are not 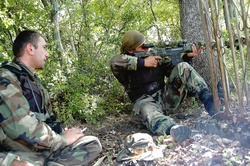 – when it comes to nuclear material or nuclear weapons, this is very serious business."