ST. PETERSBURG- A ship carrying another batch of German nuclear waste in the form of depleted uranium hexafluoride – known as uranium tails –put into port in this city amid demands from environmentalists that the shipments immediately be ceased.

The European shipments arriving from the German- and Dutch-owned Urenco uranium enrichment giant, are part of a contract between the company and Russia’s nuclear fuel giant Teksnabexport (Tenex) and Russia’s top nuclear authority recently issued a tacit confession that the uranium tails are pure nuclear waste by promising the contract with Urenco will not be renewed.

Under Russian law, nuclear and radioactive materials that are of no further use, such as reprocessing, are banned from import. Over the course of the contract with Urenco- under with 100,000 tons of tails are to sent to Russia – it has become increasingly clear that the uranium tails are rarely reprocessed, and, in many instances, are simply left in the open air – part of pile of some 700,000 tons of foreign depleted uranium hexafluoride on Russian soil.

Last week, Sergei Kiriyenko, head of Russia’s state nuclear corporation Rosatom, said Urenco’s contract will not be renewed – a wink to the environmental community that the contract had been a mistake. But Kiriyenko’s promise, while greeted with approval, still falls short of environmentalists’ demands that the shipments be ceased immediately.

The loads from Urenco, which is hastily trying to rid itself of the estimated 20,000 tons remaining on its contract before it expires, is delivering waste loads to Russia on a nearly regular monthly basis – which are being greeted with ever-mounting protests. The loads arrive at the Port of St. Petersburg were they are transferred to rail cars bound for the Urals.

“They are hauling radioactive rubbish though a millions-strong city past residential buildings to the Avtovo district,” a populous region in the city which hosts a rail switching yard, said Rashid Alimov, editor of Bellona Web’s Russian language pages.

“We demand the dangerous transport and imports into the country cease. Another batch of waste was brought on the day before Russian Independence Day (June 12th), the country is turning into a dump for Western industrialised nations.”

On Thursday, the German freighter Schouwenbank, loaded with 1000 tons of depleted uranium tails from Urenco was located near Krondshdat Island in the Gulf of Finland awaiting clearance to enter St. Petersburg’s port.

The load was already accompanied by protests as it wended its way by rail from Urenco’s Gronau facility to the ship. German environmentalists successfully delayed the load by several hours. After the waste containers’ arrival in St. Petersburg, they will be sent half way across Russia to Novouralsk, near Yekatrinburg.

Thursday, protestors gathered near the Avtovo metro station, which is near a bridge that traverses the switching yard through which the radioactive waste will be transported. 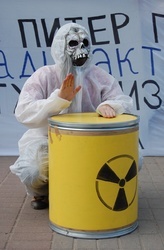 The environmental groups will follow the current load of uranium tails from its arrival in port to its departure by train to the Urals and conduct measurements of radiation levels near the waste containers.

The foreign uranium tails have by routine been shipped to Novouralsk, or other facilities in Seversk, nears Tomsk, Anagarsk, near Irkutsk, and Zelenogorsk, near Krasnoyarsk.

Russia’s nuclear regulatory body Gosatomnadzor – which was subsumed as a neutered subdivision of the Federal Service for Ecological, Technological and Atomic Oversight in 2004 – stated in its 2003 to 2006 reports that the open air storage of the uranium tails “does not correspond to contemporary safety requirements.”

Further, article 48 of Russia’s law on environmental protection expressly forbids the import of radioactive waste and nuclear materials that will not be put to further use, such as reprocessing. Yet – despite Kiriyenko’s recent announcements – the uranium tails still squeak by the law and into Russia because they are classified by the Russian nuclear industry as raw material for reprocessing.

Rashid Alimov reported and wrote from St. Petersburg, and Charles Digges wrote and translated from Oslo.