MURMANSK – Russia’s nuclear icebreaker fleet will be expanded, uranium tails will cease to be imported to Russia by 2009, and there is simply no way to make the reprocessing of nuclear fuel clean, according to Sergei Kiriyenko, head of the Russian state nuclear corporation Rosatom.

Published on June 11, 2008 by Anna Kireeva, translated by Charles Digges 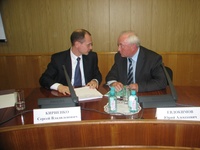 Kiriyenko’s frank announcements made in the comparative political backwater of Murmansk were a classic post-Soviet move that were reminiscent of the Yeltsin era, during which important decisions were aired well off the political radar screen, giving the government the opportunity to back-track.

But the presence of protestors from Russia and Norway made sure Kiriyenko’s announcement did not slip by unnoticed.

The transfer of the nuclear icebreaker fleet from the Murmansk Shipping Company – of which Kiriyenko was a member of the board of trustees – to the newly created nuclear corporation was the main purpose of Kiriyenko’s visit.

Despite the fact that, in Kiriyenko’s own words, the transfer was a surprise decision of the Russian government, Murmansk Governor Yury Yevdokimov, and Murmansk Shipping Company General Director Alexander Medvedev said the decision was correct. “Only this structure (Rosatom) can financially look after such powerful and dangerous material,” said Medvedev.

The documents to pass off the Vaigach icebreaker have already been signed, meaning the piecemeal transfer of private property has already begun, even though the official date for the hand-off is not until August 27th.

Personnel determines everything
As is usual in property swaps, many questions have been raised about the future workforce of the plant, questions that were articulated by member of the Regional Duma.

Most nuclear fleet workers and workers in the nuclear technical service, according to official data, are either of pension age or closing in on it. People are not anxious to step into their shoes, given the high qualifications and professionalism required are not commensurate with the high risk and low wages associated with the harsh working conditions aboard nuclear icebreakers.

“Qualified personnel are an indispensable part of the safety of nuclear installations,” Andrei Zolotkov of Bellona-Murmansk said. “It is heartening that Rosatom’s chief showed an understanding of the problems of retaining qualified staff and preparing new personnel.”

The new nuclear power station
Kiriyenko’s visit coincided with a protest of Russian and Norwegian activists against further nuclear development in the Murmansk region. Ten activists wearing Kiriyenko masks unfurled banners reading “Open the Truth – Close the Reactor,” “No Nuclear” and “No to extended reactor life-spans!” and chanted the lyrics to a popular song: “Yes, yes, yes to a sunny world – no, no, no to a nuclear explosion.”

Kaja Senstad of Norway’s Nature and Youth environmental group, who was at the Murmansk protest, said, “In Norway there are not nuclear power plants, although we were one of the first to build a nuclear reactor. Nuclear power plants bring more misery than use, and this is the enormous risks of an accident, nuclear waste, and daily waste releases.”

Senstad added that, “Unfortunately, we have to live next to the Kola nuclear power plant and spend Norwegian tax money on the safety of your nuclear station.”

Vitaly Servetnik of Murmansk’s Nature and Youth environmental group said that the majority of Murmansk’s population have a negative opinion of further developing nuclear power in their region – a fact bourn out by several public opinion polls conducted by Russia’s Romir agency.

“Despite this, Rosatom continues to hold negotiations on building a second nuclear power plant in this area,” said Servetnik during the protest. “Our region has vast resources for potential renewable, environmentally clean sources of energy. Wind parks and tidal electrical stations are already under consideration.”

The protest also included the awarding of a “D” report card grade to Kiriyenko by 16 mayors of Northern Norwegian towns, who appealed to him to derail the life-span extension on the Kola Nuclear Power Plant’s oldest reactor.

During the official meeting, which Murmansk’s Nature and Youth were barred from attending because there were no free spaces, according to organizers, Kiriyenko misspoke, saying that he was aware of the appeals being forwarded to him, but that “not everyone cannot deliver (the letters.)”

It cannot be said that the future Kola Nuclear Power Plant was the subject of discussion, but environmentalists had a positive reaction to Yevdokimov’s assertion that “the energy balance of the region must first be considered” before building a new nuclear power plant.

Despite the opinion polls indicate local opposition to new nuclear development, Kiriyenko said that “nuclear power will be Northern Russia’s life line for years to come.”

Bellona Russian nuclear industry expert Igor Kudrik said that Kiriyenko’s words about the dangers of reprocessing mean that “Rosatom will apparently begin a quest for other approaches to dealing with spent nuclear fuel and it is completely possible it will abandon the concept of a closed nuclear fuel cycle for a time.”

Kudrik said that, “Today projects are under preparation to construct dry storage facilities in the Krasnoyarsk region. We really hope that the single reprocessing facility (in Russia) – the Mayak Chemical Combine – will totally cease reprocessing activities and that Rosatom will begin to invest funds in the rehabilitation of the area in necessary measures.”

Bellona Murmank’s Zolotkov said that such a categorical announcement on Kiriyenko’s behalf confirms the point of view of numerous environmental organisations that assert that it was unnecessary to invest effort in amending laws that allowed the import of foreign spent nuclear fuel.

Kiriyenko commented on Bellona’s protests against the ongoing import to Russia dangerous waste like depleted uranium hexafluoride – or uranium tails – saying uranium tails are not classified as waste.

“We took this for reprocessing because it was economically profitable,” said Kiriyenko. “But given the chemical dangers of fluorine, we have decided to cease these import after the international contract (providing for the delivery of uranium tails from Europe to Russia) expire.”

Kiriyenko said that, under existing contracts, Russia will continue to accept and reprocess depleted uranium hexafluoride until 2009, after which the contracts will not be extended.

However, according to data in Bellona Web’s possession, the only contract for the import of uranium tails that will expire in 2009 is the one signed between Germany’s Urenco and Russia’s nuclear fuel giant Tekhnasbexport (Tenex). Uranium tails from France’s Eurodif, a subsidiary of Areva, are scheduled to keep coming until 2014.

These deadlines for the contracts were outlined in a letter to Bellona Web from former Minister of Atomic Energy Alexander Runyantsev.