A US-Russian civilian nuclear power pact that would give Washington access to state of the art Russian technology and support the building of a uranium fuel “bank” in Siberia ran into immediate trouble after its signing in Moscow on Capitol Hill as two senators began voicing opposition to the agreement.

The agreement also supports establishing an international nuclear fuel storage facility so that the United States and other nations can sent their spent nuclear fuel to Russia, essentially turning the country into the world’s nuclear waste dump.

As the United States controls 70 to 80 percent of the world’s spent nuclear fuel, the deal means America escapes having to repatriate the waste on its own territory – and that Russia’s nuclear industry will try to turn a tidy profit by accepting the shipments, which it does not yet have the facilities to safely store.

In order for the agreement – signed Tuesday by US ambassador to Russia, William Burns, and Russian state nuclear corporation chief Sergei Kiriyenko – to take effect before the end of George Bush’s presidency, it will have to fare 90 days in Congress without legislators passing a disapproval resolution on it.

That being the case, Bush – whose term in office ends on January 20th – may simply leave the document on his desk for the next president to deal with.

Russian legislature unlikely to oppose
The Kremlin backed agreement will also have to pass Duma approval, though with outgoing president Vladimir Putin’s party dominating the legislature, and his hand picked successor, Dmirty Medvedev taking power Wednesday, there is little opposition for the pact expected from Russia.

US Congress can and should have myriad reasons for opposing the pact – chief among them being the violation of Russia’s already battered environmental integrity to sink even lower with the import of US-controlled spent nuclear fuel. 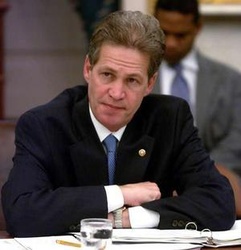 The centre is eventually slated to provide all nuclear fuel needed for states that wish to pursue peaceful nuclear power programmes so that they don’t have to enrich uranium on their own – an enterprise that can lead to nuclear weapons. But Iran has already taken steps to defy this notion and has been enriching uranium independently for the past four years.

US leads financial charge for uranium enrichment centre
US Congress has already endorsed the creation of the centre with a $50 million grant to match another $50 million put up by the Washington-based Nuclear Threat Initiative nonproliferation NGO, who received its funding from American Tycoon Warren Buffet.

Norway has joined the bandwagon, pledging $5 million of its own and promising to spearhead the effort to raise the estimated $100 million still required to get the centre operational.

Russia, the United States and the International Atomic Energy Agency would therefore be able to control the client list of the centre, striking supposed rogue states off the roster. But Iran’s ever-expanding enrichment programme seems to have thwarted that purpose.

US support seen by lawmakers as an endorsement of Iran
"I am very disappointed by the administration’s insistence on moving forward to sign a nuclear cooperation arrangement with the Russians," Coleman said told AP. "Particularly at a time when Russia’s actively undermining our foreign policy on various fronts, most importantly with respect to Iran."

In a statement, Bayh added: "US-Russian nuclear cooperation is important, but stopping Iran from gaining the capacity to make nuclear weapons is an even higher priority. Russia is not doing all it can to curb Tehran’s nuclear ambitions, and we need to use all tools at our disposal to get more cooperation from Moscow."

Coleman and Bayh say Russia’s exports of nuclear fuel to Iran’s Bushehr nuclear reactor and opposition to United Nations sanctions against Iran make the new deal suspect. In their letter to Bush, the senators say the deal "would pave the way for the increased commercialization of Russia’s nuclear energy sector and could be construed as US approval of its proliferation activities in Iran."

Bush says agreement will control Iranian proliferation
But the Bush administration now views Russia as a partner in the effort to persuade Iran to abandon nuclear weapons ambitions. A State Department official said the US did not view Russia’s assistance to Iran’s Bushehr nuclear power plant as a reason to not sign the new deal.

"In fact, the president has made clear his support for Russia’s supply of nuclear fuel to Bushehr because it demonstrates that Iran does not need to possess the complete nuclear fuel cycle with its proliferation risks to take advantage of the peaceful uses of nuclear energy," said the official, who asked not to be identified because he wasn’t authorized to speak publicly on the issue.

"There is a great deal of concern on the part of many members of Congress," Coleman said. "I disagree with the president, I think it’s bad policy."

The environmental risk for Russia
The International Uranium Enrichment Centre is slated to be built in Angarsk, a mere 30 kilometres from the major Siberian city of Irkutsk and 100 kilometres from Lake Baikal, one of the world’s most precious natural resources.

Uranium enrichment, which produces as a byproduct uranium tailings, which Russia is already importing from Germany and France, will add to the pile up of radioactive refuse in this fragile environment.

When the Duma voted in 2001 to allow the import of some 20,000 metric tons of foreign spent nuclear fuel, Rosatom’s predecessor, the Ministry of Atomic Energy, promised the country would reap $20 billion in import and reprocessing fees.

However, Russia failed to secure many foreign customers due to US dominance in the spent nuclear fuel market, and that fuel that Russia has received has not been reprocessed.

At the time the laws were passed, Russia was already harbouring 15,000 metric tons of spent nuclear fuel. If Tuesday’s civilian nuclear pact is approved by both governments, Russia stands to get what it initially wished for in terms of spent nuclear fuel – and all of the attendant environmental woes to its own population that it will entail.